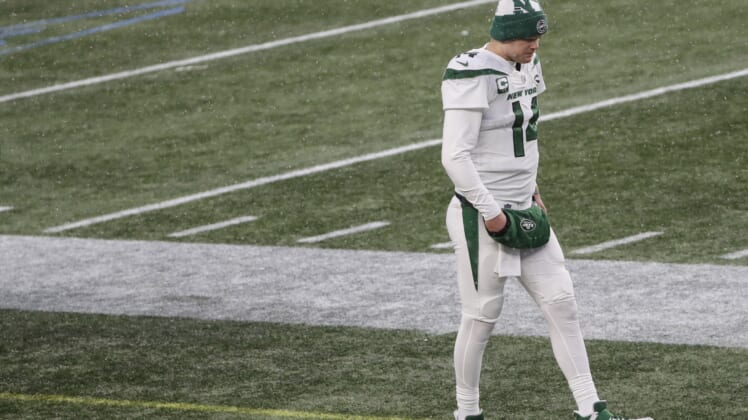 Could the New York Jets move on from quarterback Sam Darnold after just three seasons? NFL rumors have been focusing on this real possibility for months now.

When the Jets hired Robert Saleh to be their next head coach earlier this month, suggestions were that he was going to retain the former No. 3 pick. The idea would be for the young quarterback to learn under first-year offensive coordinator Mike LaFleur. According to Saleh himself, that might not be the case.

“There are a lot of discussions that need to be had,” Saleh said, via Connor Hughes of The Athletic. “To give you that answer right now would be a bit premature.”

This is an interesting stance for Salah to take early in his Jets tenure. Obviously, New York wants to keep its options open with the team boasting the No. 2 pick in the 2021 NFL Draft.

Even then, neither Saleh nor Jets general manager Joe Douglas have a built-in relationship with the quarterback. Former Jets front office head Mike Maccagnan is the one who selected Sam Darnold No. 3 overall in the 2018 NFL Draft, one year before Douglas took over that role. This could very well play a role.

NFL rumors have linked Deshaun Watson to the Jets

This is another major backdrop. Watson is unhappy with the Houston Texans’ organization and wants to be traded. The team is already engaging in internal conversations regarding trade scenarios for the reigning NFL passing champion and Pro Bowl performer.

Needless to say, these Jets have been among those bandied about. They boast the potential draft capital to pull off what would be one of the biggest trades in modern NFL history, including the No. 2 pick in April. New York could entice the Texans with that selection as well as Darnold as the centerpieces in a potential trade for Watson.

New York Jets NFL Draft: Could quarterback be an option?

There’s also a chance that New York opts to go quarterback with the second pick in April. Zach Wilson (BYU) and Justin Fields (Ohio State) are among the options.

NFL rumors have also linked the Jets to trade-down scenarios with other quarterback-needy teams. Given that Trevor Lawrence is a virtual guarantee to go No. 1 to the Jacksonville Jaguars, this second selection becomes even more valuable.

Realistically, the Jets could pull off a trade with the second pick here soon. It would be similar to when the Cleveland Browns moved the second selection back in 2016 to the Philadelphia Eagles, who ultimately took Carson Wentz when it became obvious the Los Angeles Rams were leaning in the direction of selecting Jared Goff No. 1.

This scenario could include New York moving to the bottom half of the top 10 in order to target another position. North Dakota State quarterback Trey Lance would also be an option here, though, Sam Darnold returning becomes the most-realistic option in this scenario.