The New York Jets won two too many games and cost themselves the chance to land Trevor Lawrence in the 2021 NFL Draft. Or did they? 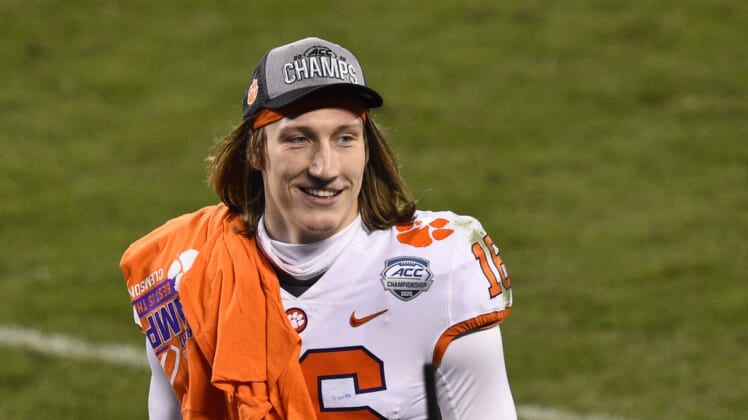 The New York Jets were in a prime position to win the No.1 overall pick until they weren’t. In the blink of an eye, the Jets rattled off two wins after many believed they were going to go winless following a 0-13 start.

In stark contrast, an upset victory in Week 1 over Indianapolis preceded the Jacksonville Jaguars losing 15 straight games to close the season. This lengthy skid netted Jacksonville the No.1 overall pick, and it should be a no-brainer to draft one of the most highly touted quarterbacks in recent memory, Clemson’s Trevor Lawrence.

However, this season has been unprecedented, and the trend could continue into the offseason if the Jets manage to pull off the unthinkable and still find a way to replace Sam Darnold with Lawrence under center.

Don’t think it’s possible? OK, maybe the Jaguars wouldn’t trade the top pick, even for a king’s ransom. Let’s examine three other scenarios that could still land Lawrence in New York after all.

The Jaguars fired Doug Marrone as head coach and are on the hunt for a new leader. There have been a plethora of reports connecting former Ohio State coach Urban Meyer to the Jaguars head coaching job.

It was also reported that current Buckeye head coach, Ryan Day, was linked to Jacksonville, although that’s since been debunked by ESPN’s Adam Schefter, who said Day isn’t interested in NFL coaching vacancies.

Nevertheless, Meyer is a heavy favorite to be hired by the Jaguars, which could mean he goes with Buckeyes quarterback Justin Fields with the first overall pick.

Fields is regarded by some the No. 2 quarterback in the 2021 draft, although he faces serious competition for that billing with BYU’s Zach Wilson. Meyer never coached Fields per say but was instrumental in getting the dual-threat signal-caller to transfer to Ohio State from Georgia.

If the Jaguars do hire Meyer, there’s a real possibility he could go with Fields atop the draft in a stunner. Working in Fields’ favor is the fact that he just outperformed Lawrence in the College Football Playoff, throwing six touchdowns in the Buckeyes’ 49-28 Sugar Bowl victory over Clemson.

Jets fans will be on the edge of their set on draft night, especially if Jacksonville hires Meyer. In that scenario, there’s a legitimate chance Lawrence could fall to second, where New York would be waiting for him.

Lawrence could follow in the steps of legendary quarterback, John Elway. Elway did not want anything to do with the Indianapolis Colts, and after the Colts selected him with the No.1 overall pick, he forced his way out, eventually getting traded to the Denver Broncos.

Similarly, Eli Manning averted getting drafted by the Los Angeles Chargers. Manning was swapped with Philip Rivers, and the draft day trade seemingly worked out for both teams.

Lawrence doesn’t seem like that type of personality, yet who knows what could happen when agents, managers and others looking out for his interests get in his ear? Jacksonville is not a big market team that has struggled mightily, managing only one winning season since 2007.

The likelihood Lawrence is afraid of the pressure of playing in New York is minimal. He was arguably the most anticipated college prospect in college football history, and despite never winning the Heisman, he won a national championship, never missed the playoffs, and continued Clemson’s dominance.

With such a cool demeanor toward the big stage, perhaps Lawrence won’t really care about what others think as far as where he wants to take his NFL future, even if it means coming off a little spoiled and choosy to kick off his pro career.

We saw what happened in Cincinnati this season. The Bengals failed to surround top 2020 pick Joe Burrow with an even competent roster and wound up posting a 4-11-1 record, losing the Heisman Trophy winner and former LSU star to a major knee injury in the process. Burrow would’ve been better suited to land just about anywhere else. Imagine him on this year’s Miami Dolphins team, for instance.

New York Jets have more resources and appeal than Jacksonville

The next couple of months are going to bring countless reports filled with speculation. Reports of Jaguars looking to trade down will be common. Reports of Lawrence not wanting to play for Jacksonville will clutter headlines. Or at least that’s what happened with Burrow before the Bengals made the easy decision to draft him No. 1 overall this past year.

Expect similar “silly season” hot takes to be recklessly launched about the Internet and draft Twitter. Whether there’s any truth to any of it will remain to be seen. However, there is a healthy debate to be had as to which team is a better fit, and the answer right now, at least on paper, has to be Jacksonville.

The Jaguars have better offensive weapons. Between a 1,000-yard rusher in James Robinson and quality receivers like DJ Chark and Laviska Shenault, Lawrence would have a decent supporting cast even before Jacksonville makes more upgrades this offseason.

On the other hand, the Jets’ offense will require some brilliant scheming by a new head coach and offensive coordinator to get the most out of it. New York’s offensive line needs work outside of left tackle Mekhi Becton, and No. 1 receiver Jamison Crowder is entering a contract year. Crowder could be a cap casualty depending how young the Jets want to go.

The difference between New York and Jacksonville is obvious. It’s the appeal of the massive city and the ability for the Jets to attract big-name free agents. They’ve largely failed to do that in recent years, yet with a competent general manager in Joe Douglas and the chance to play alongside Lawrence for the foreseeable future, open-market veterans would flock to the Big Apple for such an opportunity.

in terms of big-market brand appeal, exposure and the fanfare that’d accompany turning the Jets franchise around, what better landing spot would there be for a transcendent talent like Lawrence? The prodigy might have the mindset he can completely turn things around in New York and turn the Jets into a powerhouse. The bright lights of the big city seem to suit him.

The question is, can the Jets figure out a way to convince Lawrence of this and either force a trade to New York, prevent Jacksonville from drafting him, or will the Jags hire Meyer and make Fields their new quarterback?

All of these scenarios, however unlikely, can’t be dismissed 100% until the draft card is turned in by Jacksonville with Lawrence’s name on it. Stay tuned.