As the New York Jets gear up for the 2021 NFL Draft, how they spend the No. 2 overall pick will go a long way in determining the franchise's future. 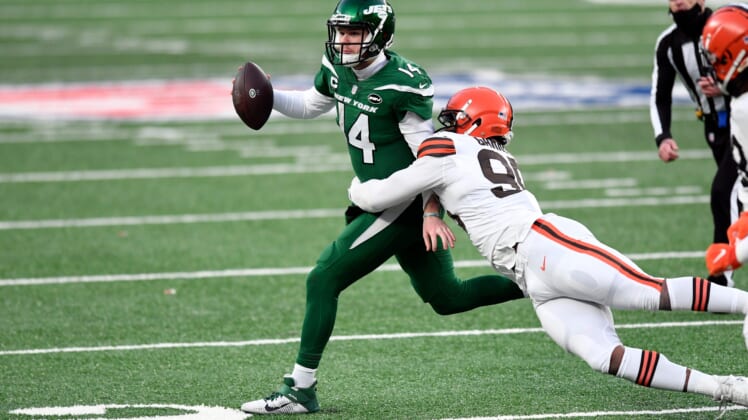 The New York Jets are at a crossroads in their franchise history. While the hiring of Robert Saleh as the new head coach is being widely praised, there’s a lot of work to be done for Saleh and the front office to get Gang Green into contention again.

A great starting point for New York’s rebuild: the No. 2 overall pick in the 2021 NFL Draft — with another first- and third-rounder — and the third-most salary cap room in the NFL at over $65 million.

Will the Jets go with Sam Darnold at quarterback, or select a first-year field general near the top of the draft? Well, let’s take a closer look at New York’s prospective draft strategy for all its top 2021 selections, with the pick order coming courtesy of Tankathon.

Chase looks like the most complete wide receiver prospect since Amari Cooper came out of Alabama in 2015. Chances are, the LSU star will deliver far more on his promise — or at least more consistently — than Cooper has to date.

In 2019 as a member of the Tigers’ national-title winning offense, Chase racked up 84 receptions, 1,780 receiving yards and 20 touchdowns. His chemistry with Joe Burrow was undeniable, yet it takes two to make such an electrifying pass-catching combo. Chase has the football IQ and blend of technique and innate explosiveness to quickly become one of the NFL’s best receivers — similar to how fellow LSU wideout Justin Jefferson make a huge splash with the Minnesota Vikings as a rookie.

Barring a package, blockbuster trade deal for superstar Deshaun Watson, New York at least has to consider upgrading from Darnold, who ranked 36th out of 39 qualifying quarterbacks in Pro Football Focus’ 2020 player grades.

Thanks to a spectacular rise to prominence this season, Wilson is blowing up NFL scouts’ radars and looks like a surefire franchise signal-caller for anyone who’d take him. If the Jets really are intent on standing pat with Darnold under center, they’re in ideal position to leverage a trade out of the No. 2 overall pick. From there, they could use their additional assets to make a trade offer for Watson and do away with Darnold then.

In the event the Jets do move down from the second pick, they could still get Surtain somewhere inside the top 10. He’s been groomed for the NFL essentially since birth, and lived up to the hype at Alabama as a 5-star recruit. Surtain is exactly the type of corner Saleh would love to make a cornerstone in his defense.

The devaluation of the running back position is obvious, but due to Harris’ unique skill set and this being later in the first round, New York should absolutely pounce on the opportunity to draft him should the opportunity present itself.

Saleh is bringing over Mike LaFleur from the San Francisco 49ers staff to be his Jets offensive coordinator. They’re going to be operating some form of the Kyle Shanahan system, presumably with Darnold at the controls. It’s predicated on a zone-blocking rushing attack to set up the play-action passing game.

Who better to spearhead the ground-and-pound offense than Harris? That’s exactly what he did at Alabama. And here’s what he did in 2020: 1,466 yards rushing, 26 touchdowns, and 43 receptions for 425 yards and four more scores. That’s the type of all-purpose playmaking New York can’t afford to pass up if he’s there.

Now, in the event Harris isn’t around, there should be some fascinating options remaining. Rousseau, for instance, had 19.5 tackles for loss and 15.5 sacks in 2019 before opting out of the 2020 campaign. His production is a little ridiculous and doesn’t realistically project to the NFL right away, yet under Saleh’s tutelage, Rousseau could well transform into the NFL’s next elite pass-rusher. Talk about a bargain at No. 23 overall.

Jets general manager Joe Douglas has a fair amount invested in his offensive line, so he’d probably be reticent to draft another big man this high. Having said that, Mayfield is almost certain to be an upgrade over George Fant at right tackle, and if he weren’t to be, the Michigan mauler can slide inside to guard and compete with any Jets incumbent for a first-year starting job somewhere.

It’s quite possible the Jets could land any of these prospects in a trade-down scenario if they really want to acquire more picks that could either be used as leverage to deal for an established star player, or to simply bring in additional quality players from the 2021 draft class.

In any event, Phillips fills the obvious and ever-important need of edge-rusher. After beginning his career at UCLA and working through multiple injuries, the 6-foot-5, 266-pound pocket destroyer was all but finished with football. Phillips then decided to give a transfer to Miami a try, and what a raging success it was.

Phillips sat out for 2019 before coming back with a vengeance for the Hurricanes, erupting for 15.5 tackles for loss and eight sacks in 10 games this past year. We talked about Rousseau in the prior section. Someone had to step up in his absence, and Phillips did just that — and then some.

If you were wondering who Pro Football Focus’ No. 1-graded running back from 2020 was, it wasn’t Harris or Clemson’s Travis Etienne. Nope, it was North Carolina’s Williams. He averaged 7.3 yards per carry and scored a whopping 19 touchdowns on just 157 carries. The Tar Heels tailback also had three receiving TDs among 25 receptions for 305 yards. Not a bad new lead back option if Harris isn’t meant to be.

For someone who’s as multiple and able to evolve as well as Saleh is when it comes to coaching defensive X’s and O’s, it’d behoove New York to snag a savvy, capable cornerback who could step right in and start on the outside. Campbell fits that description perfectly. Already stout in man coverage, Saleh could mold Campbell into a multiple Pro Bowler by improving his skills in zone schemes.

Now that Saleh is coming to New York and Richard Sherman is slated to hit free agency, don’t be surprised if the All-Pro cornerback reunites with the man he’s pounded the table for to be a head coach.

Why is that relevant to this write-up? Because Sherman went to Stanford, and whether he goes from the Bay Area to Broadway or not, if the Cardinal’s Adebo is still around when Day 3 of the draft starts, the Jets will be more than happy to scoop him up.

Adebo is another opt out who’s lost some steam as an NFL prospect. That works in New York’s favor, as the defense could use a viable outside cornerback.

Safety Marcus Maye and slot corner Brian Poole are clearly the best players in the Jets secondary. They’re both hitting free agency, making the defensive backfield a serious priority. Especially if New York doesn’t hit on this need earlier in the draft, Adebo is a no-brainer pick here.

At 6-foot-1, 192 pounds, Adebo has great length, athleticism and obvious ball skills that rank along with the best corners in the class. Over 24 games at Stanford, he had 27 passes defensed, eight interceptions and 97 total tackles.

The other options here: Brown averaged over 20 yards per reception on his final 106 career receptions with the Tar Heels, so he’d be a great pick if the Jets go with Zach Wilson or Justin Fields at No. 2 overall. Otherwise, Trask, who threw an FBS-high 43 touchdowns for Florida in 2020, is an appealing option to bring in later in the draft who could at least give Darnold some competition in camp.

In 247Sports’ prospect rankings for the state of Texas in 2017, there’s a pretty impressive list of college recruits, including multiple future NFL first-round picks. Not-a-one of them was ranked ahead of Wilson. That’s right. The Seminoles standout was the No. 1 prep player from the Lone Star State, ahead of Jeff Okudah, CeeDee Lamb and several others.

That’s the type of talent and draft value Wilson represents at this juncture of the proceedings. A minor leg injury ended Wilson’s final year in Tallahassee a little early, but he’ll be ready to rock by the time he has to report for an NFL camp.

Wilson took a little while to get rolling at a Florida State program that’s been struggling to transition to a new, thriving era of late. He started to put it together as a junior in 2019, though, racking up 8.5 tackles for loss, five sacks, 44 total tackles and four passes defensed.

To be that disruptive at 6-foot-5, 305 pounds shows the skill Wilson has. The potential really is extraordinary, and you can bet Saleh will be ecstatic to get someone as gifted as Wilson to mold at the professional level if it comes to pass.

Regarding the other targets here, Molden is a pure slot corner who’d increase on the priority list if Poole decides to flee in free agency. The same goes for Wiggins if Maye can’t strike a long-term contract extension with the Jets front office, but with all the cap room, he should be among the chief priorities.

In a perfect world, the Jets manage to reignite Darnold’s career by giving him two incredible weapons who honestly could’ve played on Sundays this past season.

The remainder of the Jets’ ideal mock draft is spent upgrading defensively. Pretty simple. Saleh’s schematic acumen will on its own improve New York’s D, as will retaining some key free agents. By getting Phillips to help the pass rush, Adebo to fill a key role at corner and Wilson to potentially be a big steal, it’s really a home run of a draft if Douglas can pull it off.

Under these circumstances, maybe Darnold does in fact have a future in the Big Apple. If 2021 doesn’t go well, though, expect the Jets to go all-in on upgrading the most important position on the field in Year 2 of the Saleh era. Darnold should be able to at least play passably well if Chase is the No. 2 pick. Whether it’s enough to earn a long-term commitment from the organization is another matter.