NFL wide receiver rankings: Who are the most dynamic duos in 2020? 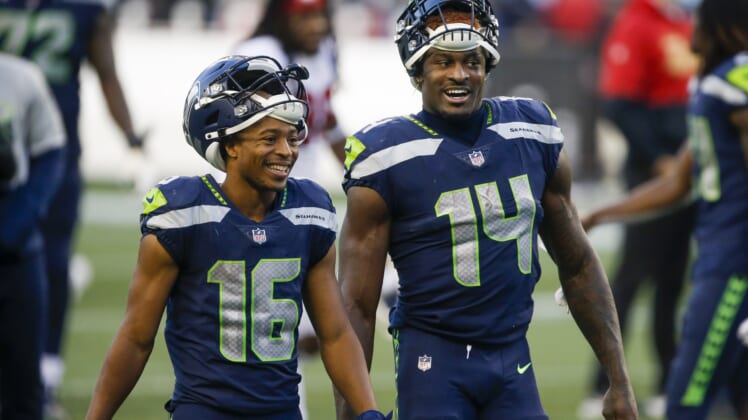 When it comes to NFL wide receiver rankings, it’s always fun to break down who the best duos are in the league.

That’s trickier to do than it sounds, because with a team like the Kansas City Chiefs, few could argue they have the best pure pass-catching tandem between Tyreek Hill and Travis Kelce. Alas, Kelce is a tight end, and reigning Super Bowl MVP Patrick Mahomes has no small part in elevating the play of his supporting cast.

With those qualifiers out of the way, continue reading for our fluid list on the NFL’s most dynamic wide receiver duos.

A strong case can be made for Buffalo’s Stefon Diggs and Cole Beasley to crack the top five. However, considering Beasley is probably inferior overall to his injured teammate, John Brown, this Panthers pass-catching tandem is doing more with less in 2020 and feels better suited for the No. 5 spot right now.

Both Moore and Anderson are easily on track to eclipse 1,000 yards receiving, and the former is averaging a whopping 18.5 yards per catch despite playing with a weak-armed quarterback in Teddy Bridgewater. Anderson is explosive in his own right but is more of a possession target in his first year with Carolina, racking up 83 receptions through the first 13 games.

At only 23 and 27 years of age respectively, Moore and Anderson are just beginning to realize their collective potential. With another season under offensive coordinator Joe Brady and an upgrade from Bridgewater in 2021, these Panthers are going to be household names in short order.

They may not get the proper publicity now as part of a losing team, but don’t sleep on Moore or Anderson driving a serious Carolina resurgence next season.

Let’s face it: Sean McVay’s brilliant offensive schemes wouldn’t work quite as well without Kupp and Woods in the fold, and Jared Goff wouldn’t have gotten a massive payday.

Few pairs of wideouts offer a superior combination of ball-carrying ability, blocking in the run game, sure-handedness and steady production. Kupp has been a revelation since L.A. selected him in the third round out of Eastern Washington in 2017, while Woods arrived that same year along with McVay.

These receivers both logged 90-plus catches last season and are on target to meet those standards again in 2020. This despite the fact that the Rams are running the ball far more successfully than a year ago. It goes to show how invaluable the continuity in Los Angeles is in helping Kupp and Woods consistently place among the best receivers in the NFL.

Yes, Jones has been injured amid another down year in Atlanta, yet when he is healthy enough just to get around the gridiron at even at 75% of his full faculties, the seven-time Pro Bowler combines with Ridley as one of the most lethal pass-catching combos in the sport.

Whatever red zone production Jones has lacked, Ridley makes up for with his 25 touchdown catches through 41 career games as of this writing. Jones’ prior six-year run was downright incredible, lack of touchdowns notwithstanding. His lowest single-season yardage total in that span was 1,394 yards receiving last year.

Falcons quarterback Matt Ryan is regressing before everyone’s eyes. His marginal arm talent is being exposed, as he can’t push the ball down the field like he used to. With 25 interceptions in his past 28 starts entering Week 15 of the 2020 campaign, Matty Ice has gone cold indeed.

If Ryan can bounce back this coming year or Atlanta can provide a spark with a new signal-caller, perhaps Jones and Ridley can show their full potential with Ridley entering his fourth year and Jones refreshed and healthier than he’s been of late.

Putting a rookie on here seems blasphemous, yet in Jefferson’s case, it’s fully earned. The LSU product vindicated the Vikings’ decision to trade Diggs to Buffalo, as Minnesota proceeded to use the pick acquired in that deal to select Jefferson in the first round.

Pro Football Focus’ player grades list Jefferson tied for third and Thielen in second ahead of Week 15. Jefferson is already a 1,000-yard receiver, and Thielen has hauled in 12 touchdown catches on the year.

It stands to reason Jefferson will only get better, which will continue creating more favorable matchups for Thielen. Quarterback Kirk Cousins has certainly reaped the benefits of Jefferson’s rapid development, helping the Vikings overcome a nightmarish 1-5 start to vault into NFC playoff contention.

But the feeling is Minnesota could still do better than Cousins at football’s most vital position. If Captain Kirk can keep his chemistry with Jefferson and Thielen intact, though, he should keep his job and continue helping the tandem produce at an elite level in 2021 and several years after that.

This is the classic freak and finesse duo. Metcalf is an explosive vertical threat who could already be an NFL receiving champion in only his sophomore season. Lockett is electrifying in his own right, but is more of a go-to target to move the sticks.

What stands out about both Metcalf and Lockett is how fearless they are going over the middle, and how well they track the beautiful, arching deep balls thrown by Seahawks superstar Russell Wilson.

If Seattle can upgrade its pass protection around Wilson while Metcalf is still under his rookie contract, there’s a real chance the numbers could be even scarier as the 23-year-old continues unlocking new levels of his upside. Crazy to think Metcalf even fell to the second round of the draft in the first place — and that Lockett went in the third round in 2015.

One thing is certain: The Seahawks can really hit on mid- to late-round draft choices. Now, the key is to find some more diamonds in the rough in the offensive trenches to maximize their already epic passing attack.