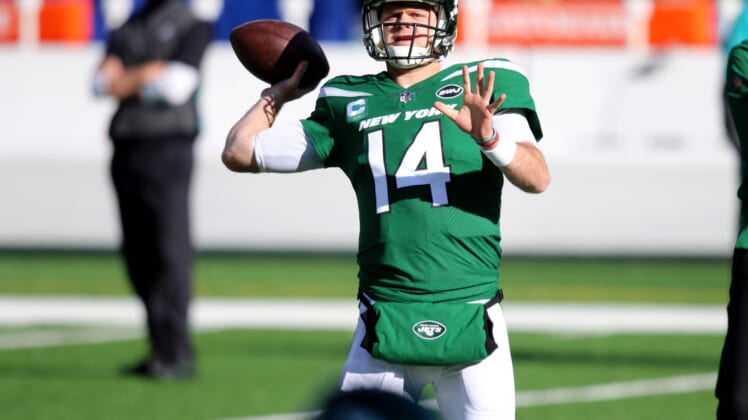 The New York Jets are paying close attention to the NFL quarterback carousel this offseason. With a new coaching regime taking over, the future of Sam Darnold with Gang Green appears increasingly uncertain.

When the Jets hired Robert Saleh, immediate speculation hinted that he and offensive coordinator Mike LaFleur wanted Darnold as their quarterback of the future. But when New York’s new head coach spoke to reporters, there was no commitment to the former No. 3 overall pick. With the team holding the 2nd overall pick in the 2021 NFL Draft, many began to speculate that Darnold would be replaced by Justin Fields or Zach Wilson.

Unsurprisingly, at a time when so many teams are desperate for a shakeup at quarterback, the Sam Darnold trade rumors are increasing by the day.

It didn’t take long before a few general managers started calling the Jets. While Darnold hasn’t lived up to his draft-day hype, playing more like an NFL Draft bust, many around the league seem confident they can salvage the former top quarterback prospect.

According to Sports Illustrated’s Albert Breer, more NFL teams have started calling the Jets about Darnold. As of now, general manager Joe Douglas isn’t rejecting any inquiries that come along. However, he makes it known that the team is still evaluating its options at quarterbacks for 2021 and beyond.

It’s understandable why the Jets are taking this approach. For one, it gives them more leverage in negotiations. Any team trying to land Darnold might believe they need to offer more just to convince New York to trade the quarterback. Additionally, Fields and Wilson haven’t had a chance to hold workouts yet for NFL teams.

New York might also be waiting on the Houston Texans. Deshaun Watson has demanded a trade and insists that he will never play another snap for that team. For now, general manager Nick Caserio is holding his ground and not even engaging in hypothetical discussions. Given this situation is worsening, a trade late in the offseason might be the only resolution. If that’s the case, the Jets would be foolish not to pursue it.

Ultimately, trading Darnold might be in everyone’s best interest. He needs a fresh start after three awful years with the Jets and a change of scenery might turn things around for him. As for the Jets, they are in a great spot to land a better quarterback prospect who offers five years of contract control and trading Darnold would net them an additional draft pick.

New York will likely keep evaluating its options, but don’t be surprised if the final decision leads to a blockbuster trade.