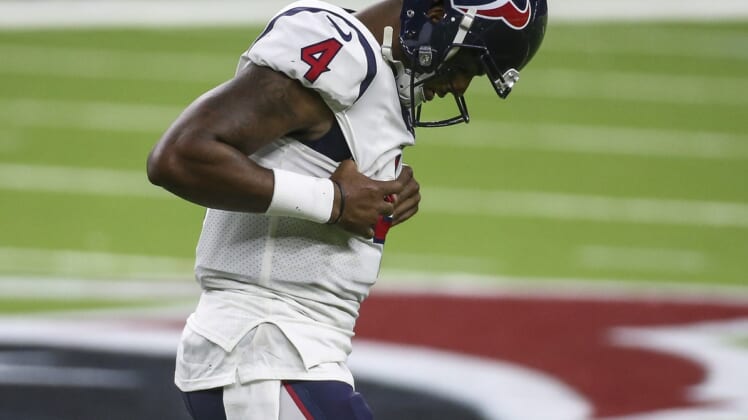 Deshaun Watson is done playing for the Houston Texans, potentially even willing to sit out games to force a trade. While the superstar quarterback desperately wants out, though, there’s at least one other NFL team he may not want to play for.

The 25-year-old has become increasingly frustrated with the situation in Houston. A problem that reportedly started with some perceived deception has unraveled to the point where the franchise quarterback refuses to communicate with the organization. While the Texans are refusing to engage in trade discussions, Watson is still pushing to be moved and this relationship likely won’t get better anytime soon.

If general manager Nick Caserio eventually gives in, setting the stage for a historic blockbuster deal, Deshaun Watson already has his preferred landing spots and there’s at least one team he may not be high on.

ESPN’s Jeremy Fowler provided an update this week on the ongoing saga between Watson and the Texans. Houston is still rejecting inquiries, but its quarterback is already looking into potential teams he could play for in 2021. The San Francisco 49ers and Denver Broncos are among the teams that intrigue the Pro Bowl passer, but the New York Jets aren’t.

It’s a bit surprising, given the Jets hired Robert Saleh as their head coach. When Watson made his own list of potential candidates to replace Bill O’Brien in Houston, Saleh was one of the top coordinators he recommended for an interview. The Texans ultimately ignored the suggestion and New York struck quickly with one of the best hires this offseason.

The Jets are also one of the few NFL teams with the draft capital to meet Houston’s asking price. Furthermore, unlike the Miami Dolphins, New York has more than enough cap space to build a quality offense around Watson.

Related: Deshaun Watson has these two teams atop his trade list

With that said, the Jets have their own history of issues. Team owner Woody Johnson, who served as the ambassador to the United Kingdom under former President Donald Trump, was investigated for racist and sexist comments. He has a history of stepping into football matters and it’s impossible to forget this team hasn’t reached the playoffs since 2010. Given Watson’s issues with the Texans are tied to owner Cal McNair, this might be a situation he prefers to avoid.

There’s a lot more to like about the 49ers and Broncos. In San Francisco, Watson could partner with Kyle Shanahan to help this quarterback-friendly scheme become one of the best offenses in the NFL. Pair it with a top-10 defense and the 49ers instantly become a perennial Super Bowl contender for as long as Watson is under center.

Related: Relationship with Deshaun Watson even worse after recent moves

Denver also has a lot to offer. Kareem Jackson, Watson’s former teammate and now one of the team’s best defenders, has talked up the Broncos to his friend. While Vic Fangio is a defensive-minded head coach, the Broncos have a supporting cast in place that any quarterback would love.

Watson would have a star left tackle in Garett Bolles and an outstanding cast of weapons. Jerry Jeudy is a future No. 1 wide receiver and Courtland Sutton thrived in that same role before tearing his ACL. The Broncos also have tight end Noah Fant and slot receiver K.J. Hamler, forming one of the best supporting casts in the NFL.

A blockbuster trade likely isn’t looming, but the Texans might need to change their mind at some point. If that happens, no matter what team lands him, Deshaun Watson will be in a far better situation.