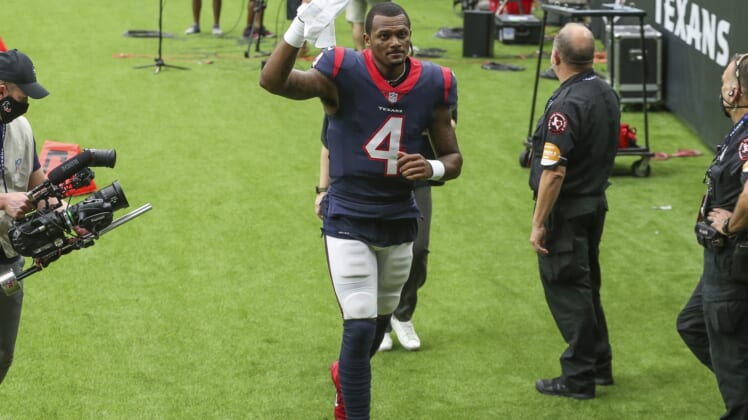 Deshaun Watson never wants to play for the Houston Texans again. While the organization is trying to repair the damaged relationship, it becomes a lot harder with the franchise quarterback not speaking to the team.

The 25–year-old officially requested a trade in January, the news coming after weeks of rumors put a spotlight on his frustration with the team’s ownership and front office. Thus far, the Texans have rejected calls from inquiring teams and set an asking price that no one can realistically can, all while trying to repair the distrust their quarterback has in owner Cal McNair and executive Jack Easterby.

Unfortunately for the Texans’ hopes of changing his mind and convincing him to say, Watson seems to have heard more than enough from them.

According to Sports Illustrated’s Albert Breer, Watson isn’t returning phone calls from general manager Nick Caserio or head coach David Culley. While both men were hired to oversee a complete overhaul of the team, they also represent part of Watson’s issues with the Texans.

After the Texans fired head coach and general manager Bill O’Brien, their team leader and franchise passer played the best football in his career. In his final 12 starts, Watson completed 71.6% of his passes, averaged 8.97 yards per attempt, post a 27-4 TD-INT ratio and had a 116.8 quarterback rating.

He did all of that while playing behind one of the NFL’s worst offensive lines and surrounded by a supporting cast that dealt with injuries and suspensions. While Houston won just four games over that stretch, its quarterback played at an MVP-caliber level.

When the season ended, McNair told Watson that he would have input on the team’s search for a general manager and head coach. The three-time Pro Bowl selection looked into prospective candidates for both positions, recommending Eric Bieniemy and Robert Saleh to become the head coach.

The Texans seemingly ignored him. McNair and Easterby reportedly even looked past the recommendations made by the search firm hired, with both men choosing Caserio over Louis Riddick and Omar Khan.

At the start of the search, McNair said that Easterby – filling in as interim general manager – wouldn’t choose who took on the full-time role. But Caserio and Easterby have a close relationship from their time with the New England Patriots, where Houston’s current VP served as the team chaplain.

Watson learned of Caserio’s hiring on social media, sparking anger that his recommendations were ignored and the team’s problematic hiring process remained. Meanwhile, the Texans never met with Saleh and didn’t request an interview with Bieniemy until it was too late.

While his issues with the Texans rest entirely on McNair and Easterby, Watson made it clear that the new coaching hire wouldn’t convince him to stay. In Culley’s introductory press conference, he said he took the job because Watson was the quarterback.

The Texans might still believe this damaged relationship can be repaired, but recent moves on the staff have only made things worse. Now, Watson’s teammates are encouraging him to get out and veterans in the locker room also have issues with the organization.

Watson is reportedly willing to never suit up for the Texans again, which would mean sitting out training camp and the 2021 regular season. It would cost him millions of dollars, but it might also be his best shot at getting out. If that happens, he won’t be the last Texans’ star who forces a trade.