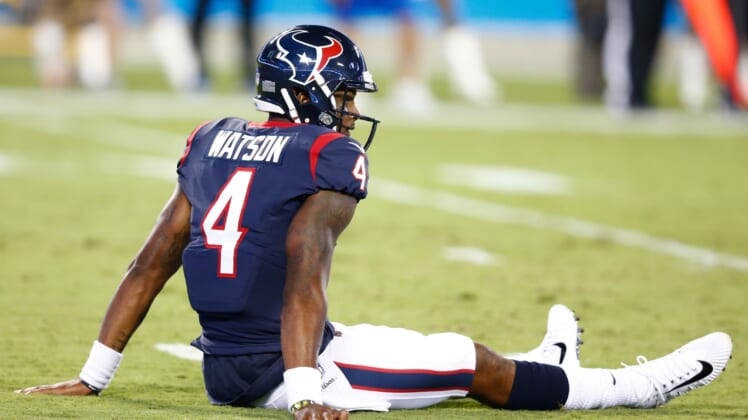 Texans rumors: Deshaun Watson wants out, a trade demand the Houston Texans are unwilling to accommodate to this point. But, amid growing frustrations with the organization, their star quarterback could be prepared to make the ultimate leverage play to get out of town for good.

Shortly after Houston’s season ended, the relationship between the organization and its quarterback started going south. After years up putting up with Bill O’Brien, who traded All-Pro receiver DeAndre Hopkins, Watson’s trust in the front office evaporated.

Now, locked into a recently-signed contract extension, the star NFL quarterback could take the ultimate step to force the Texans into a trade.

Texans rumors: Will Deshaun Watson sit out to force trade?

Deshaun Watson’s frustration with the Texans’ ownership and front office first went public. Before long, a tenuous situation worsened by the day. The 25-year-old wanted out, frustrated after reportedly being lied to by team owner Cal McNair. Then, shortly after openly confirming the rumors, Watson demanded a trade.

The Texans have been against trading their superstar from the start. Houston made it clear that it wouldn’t even consider the idea and even considering a move would require a team willing to meet an extreme asking price. Then, after hiring David Culley as head coach, general manager Nick Caserio stated there was no interest in a blockbuster trade.

For the time being, Houston holds the leverage. The new CBA allows teams to fine a player for each practice during training game they miss and clubs can withhold game checks if players sit out. Given Watson’s vow to never play for the Texans again, we could see something unprecedented in 2021.

An AFC executive spoke to ESPN’s Josina Anderson about the Deshaun Watson situation. In that conversation, the executive hinted that Watson might need to hold out the entire 2021 NFL season.

While we have seen a player sit out a year over a contract dispute, that was running back Le’Veon Bell when CBA rules gave players the flexibility to do that. Things would be a lot different in 2021 in this situation.

Watson would face daily $50,000 fines for each training camp and would miss out on his scheduled $10.54 million salary for the upcoming season. In addition, per Pro Football Talk’s Mike Florio, Watson might owe Houston $5.4 million annually over the next four years to account for an unearned signing bonus if he skips games.

If Watson is willing to pay that money and to sit out the entire season, the Texans will likely surrender at some point. Carson Palmer retired in 2011 before the Cincinnati Bengals finally caved to his trade demand and sent him to the Raiders.

Rather than lose Watson for nothing, all while showing players across the league that the organization can’t be trusted, the Texans would likely trade him.

In the end, this likely ends in a multi-year rebuild for the team. For that to happen, the team must do right by its stars and accomodating Watson and J.J. Watt’s trade requests.