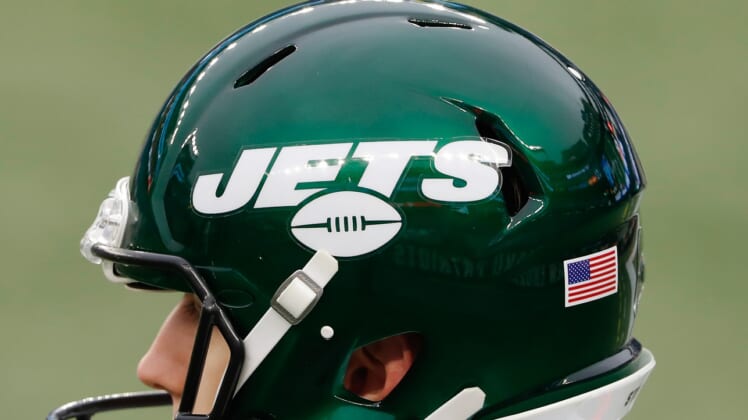 Jan 3, 2021; Foxborough, Massachusetts, USA; The New York Jets logo is seen on a helmet during the first half of their game against the New England Patriots at Gillette Stadium. Mandatory Credit: Winslow Townson-USA TODAY Sports

The New York Jets struck gold with the hiring of their head coach. As the NFL offseason begins, the organization now faces a crucial decision in determining whether to stick with Sam Darnold or to trade him and take advantage of having the No. 2 pick in the 2021 NFL Draft.

When the Jets fired hired Saleh and offensive coordinator Mike LaFleur, immediate speculation indicated that Darnold could be retained in 2021. But the organization quickly made it clear that they aren’t ready to commit to anyone as their long-term quarterback. Teams around the league started calling, fueling increased chatter that another blockbuster quarterback trade will go down this spring.

Here’s the latest on Sam Darnold’s future with the Jets.

In his weekly mailbag, Sports Illustrated’s Albert Breer said he thinks the Jets will take a quarterback with the No. 2 overall pick and then trade Darnold to another club.

A final decision isn’t expected for months, with Pro Days playing a key role in determining which route the Jets take. Zach Wilson holds his Pro Day at BYU on March 26. A few days later, Justin Fields will work out for teams at Ohio State’s Pro Day on March 30. After both events, the Jets should have plenty of information to determine which quarterback they want to bet on as their face of the franchise.

In a dream scenario, there’s another option. New York would love to acquire Deshaun Watson, who desperately wants out of Houston. The Jets have the draft capital to pull off a historic deal, which puts them in rare company. The Texans refuse to listen to offers, and the situation could get even uglier this summer, with rival teams expecting this saga to play out for months.

Even if Watson is off the table, the Jets might be better off trading Darnold. He is under contract for 2021, with an expensive team option for the 2022 season. While he only turns 24 in July, his resume in the NFL leaves a lot to be desired. He has completed just 59.8% of his passes and averaged 6.6 yards per attempt across his first three seasons. Furthermore, Darnold carries an ugly 13-25 record, a 45-39 TD-INT ratio and is coming off the worst season in his career.

If another NFL team is willing to meet New York’s asking price, a trade makes sense for everyone involved. Darnold will get a fresh start in a new environment, his new team buys low on a talented quarterback and the Jets can take a franchise-caliber passer with the No. 2 overall pick in a great draft class.

Which quarterback will New York Jets select in 2021 NFL Draft?

The 2021 NFL Draft isn’t until April 29, which is when we’ll officially know which direction the Jets are going. With that said, the tea leaves keep hinting that New York is ready to build around a new quarterback. With Trevor Lawrence long gone, it comes down to Justin Fields and Zach Wilson.

Both quarterbacks would be in the conversation for the No. 1 overall pick any other year, including the 2020 NFL Draft. Wilson sent his draft stock skyrocketing this past season, behind a phenomenal junior campaign. He threw for 3,692 yards with a stellar 33/3 TD/INT ratio, completed 73.5% of his passes and rushed for 10 scores and 254 yards.

He’s emerged as the favorite to be the No. 2 pick. At 6-foot-3 with a rocket arm, great athleticism and the ability to throw off any platform, teams are certainly dreaming about a discount version of Patrick Mahomes. There are few better quarterbacks in football better outside of structure than Wilson and the right coach can harness that into making him a perennial Pro Bowl selection. Of course, he has also drawn comparisons to Johnny Manziel and Baker Mayfield.

Fields entered the 2020 college football season with an opportunity to at least challenge Lawrence for the No. 1 spot in draft rankings. Unfortunately, with many of his teammates sidelined at times by COVID-19, that never came to fruition.

While his draft stock is slipping, concerns about his ability to read the field and progress through his options are overblown. He’s got the physical talent to be an NFL star and his resume is outstanding. Fields destroyed Lawrence’s Clemson Tigers with a phenomenal performance in the College Football Playoff Semifinal. He also went 20-2 as a starter at Ohio State, completing 68.4% of his passes with a 63/9 TD/INT ratio and 179.1 quarterback rating in 22 games.

Keep in mind, he did this against greater competition than Wilson faced. Fields is also more polished as a passer, handles pressure extremely well and boasts both the arm strength and touch to make precision throws at every level of the field.

Whether the New York Jets take Justin Fields or Zach Wilson, they really can’t go wrong. Either quarterback would be an exciting addition for this team, bringing far more to the table than Darnold can offer. Plus, with tons of cap space, New York can finally surround its star quarterback with talent.