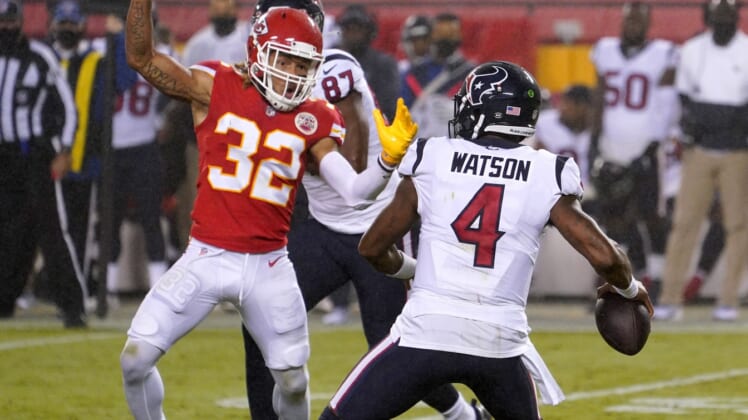 Deshaun Watson wants a trade. The superstar quarterback made that clear to the Houston Texans in January, drove the point home in a recent meeting with the new head coach and is sticking by his trade demand. Unfortunately for him, NFL teams don’t seem optimistic that a blockbuster deal happens.

The feud between Watson and the Texans really started this offseason. Angered by the team not following through on its promise to give him input on the hiring process for a head coach and general manager, the 25-year-old had enough. After years of organizational dysfunction, much of it created by owner Cal McNair and team executive Jack Easterby, Watson had enough.

After requesting a trade on Jan. 29, trade rumors have been flying about where Deshaun Watson will play next. Right now, things don’t look promising for the MVP-caliber quarterback.

Shortly after Watson requested to move on from the Texans, the organization made it clear they have no interest in parting with him. It’s led to weeks of posturing from both sides, with Watson threatening to sit out the 2021 season and Houston ignoring trade offers and calls from other teams. With the 2021 NFL Draft approaching, seemingly a key deadline for a deal, many thought a blockbuster move could happen before draft day.

According to NFL Network’s Ian Rapoport, no one in the NFL believes Watson will be traded and this saga between the Texans and their star is expected to last for a very, very long time.

Both sides are standing their ground. The Texans believe they can convince Watson to change his mind, with the organization determined to spend the next few months repairing a fractured relationship. Team officials reportedly called Watson on a daily basis, but those phone calls have gone unanswered.

Recent moves have only made things worse. Watson’s teammates have encouraged him to pursue a trade, believing their teammate and leader would be much better off in a stable and competitive situation. As all of this unfolds, more Texans’ players seem to be turning on owner Cal McNair and the Texans’ front office.

Houston released J.J. Watt, gave away DeAndre Hopkins and is expected to let Will Fuller depart in free agency. Meanwhile, thanks to the Laremy Tunsil trade, the Texans don’t have a first- or second-round pick in the 2021 NFL Draft. With this team destined for a rebuild, it would seem to make sense that trading Watson would accelerate that process.

But general manager Nick Caserio, who was hired under suspicious circumstances and against the advice of a search firm, isn’t caving on this matter. He isn’t willing to even consider the thought of trading one of the best quarterbacks in the NFL. Instead, he’s confident that he can turn things around with limited draft capital and no cap room.

Meanwhile, Watson is willing to take this the distance. He has vowed to never play another snap for the Texans. Even if that means sitting out next season, which would cost him millions of dollars, he isn’t backing down.

For now, this situation seems destined to get uglier. If Deshaun Watson starts sitting out games, with his teammates supporting him against an organization they don’t trust, tensions could get even higher. Furthermore, the NFL might not be pleased that one of its biggest stars isn’t suiting up and that is leading to far fewer fans attending or watching Texans’ games.

It will all come down to who caves first. Neither side is even close to considering that at this point, but the likeliest to give in might be the Texans. If that happens, teams like the Miami Dolphins, Carolina Panthers and New York Jets will be ready to make historic offers.