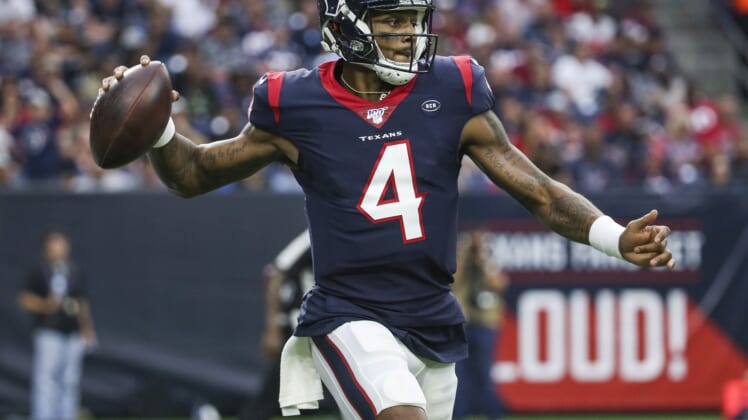 The Carolina Panthers are reportedly determined to make a blockbuster trade for superstar quarterback Deshaun Watson, and are willing to give the Houston Texans whatever they want.

With some recent moves to clear out salary cap space and plenty of NFL rumors linking Carolina to Watson, it seems more likely by the day that the Panthers will be Watson’s new team.

It’s always good when an organization’s main leadership is on the same page, and that’s the case in Carolina according to Pro Football Network insider Tony Pauline, who spoke to a source about the Panthers’ interest in Watson, per PFN’s Ben Rolfe:

“This is a person in the know, and they told me that the Panthers will do anything they can to acquire Watson, and they will pay any price to acquire Deshaun Watson. […] Their new GM Scott Fitterer, who came from the Seattle Seahawks, is on board with trading for Watson. More than anything else, and most importantly is, I was told the owner wants to make it happen.”

Worth noting is that Pauline is an NFL Draft expert who’s definitely in the know on the latest buzz surrounding the top college prospects entering the pros.

Carolina has a relatively high pick in the 2021 NFL Draft at eighth overall. The fact that all the scuttlebutt Pauline is hearing out of Charlotte is all about Watson, and not any of the top QB prospects in the 2021 draft class, speaks volumes to how badly the Panthers want to bring Watson aboard.

What will Carolina Panthers have to give up in a Deshaun Watson trade?

“Any price” is a vague and bold term to use when it comes to making a trade happen. Then again, how often does a legitimate top-five quarterback who just led the NFL in passing yards at age 25 become available in a trade?

A trade package probably needs to include the Panthers’ most valuable playmaker in All-Pro tailback Christian McCaffrey. Although he missed 13 games last season, in 2019 he piled up 1,387 yards rushing and over 1,000 receiving on 116 receptions, scoring 19 total touchdowns in one of the best years by a running back in NFL history.

Fans would be sad to see McCaffrey go, but Carolina would have a huge step up over Teddy Bridgewater in Watson and could still have one of the NFL’s most underrated receiver duos in Robby Anderson and DJ Moore in the fold.

The Texans are likely to seek out as many draft picks as possible in a trade package, along with an established veteran or two. Shipping McCaffrey, Bridgewater and possibly one young defensive player like Derrick Brown, Yetur Gross-Matos or Brian Burns would probably get the job done, in addition to two or three first-round picks.

Those assets should be more than enough for Houston to accept. Bridgewater isn’t the long-term answer at QB, yet the Texans would be high enough in the 2021 draft with Carolina’s first-rounder to build around a new signal-caller on a cheap rookie contract.

In an NFC South where Tom Brady is entering his age-44 season, Matt Ryan is in the midst of a regime change Atlanta and Drew Brees is probably retiring, the Panthers have the chance to ensure they have easily the best long-term QB outlook in the division by landing Watson.

Plus, Watson is someone who’d make Carolina an instant favorite to finish second in the NFC South behind Brady and the reigning champion Tampa Bay Buccaneers. That’d mean the Panthers would definitely challenge for a playoff berth in 2021.

All those perks sound worth the prohibitive cost of a Watson trade. Carolina appears all-in on this. Let’s see if the Texans give in.