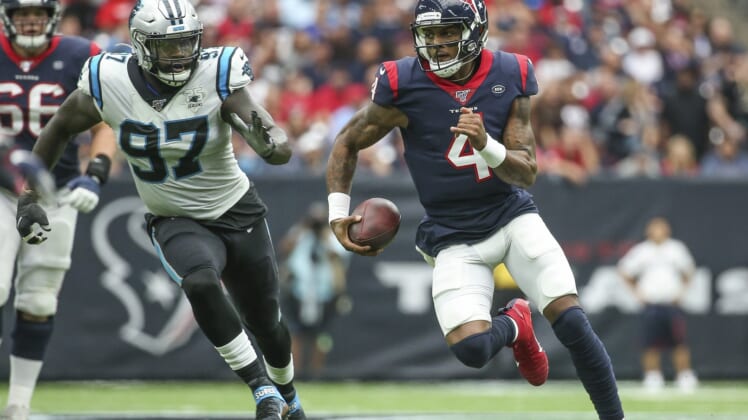 Rumors continue to fly about superstar quarterback Deshaun Watson, and the Carolina Panthers are reportedly ready to sacrifice a lot to land the Houston Texans signal-caller.

Any trade package centered around landing Watson is going to cost a lot for the team who wants him, but according to ESPN’s David Newton (via 247Sports), the Panthers are determined to get the quarterback spot right, and believe Houston’s star is a great solution.

Newton discussed the thinking behind Carolina’s pursuit of Watson, citing the big-swinging mentality Carolina owner David Tepper has as he seeks to deliver a contender:

“The Panthers will do whatever it takes to get Deshaun Watson, and that includes giving up three first-round draft picks and (running back) Christian McCaffrey. Owner David Tepper wants to win a Super Bowl. He’s made that clear. He understand it takes a marquee quarterback to do that. If you look at recent history, outside of (Kansas City Chiefs quarterback) Patrick Mahomes, the quickest way to do that is to trade for a marquee quarterback and not draft one in the first round. Just ask Tampa Bay.”

Lots of fair points being made here, but there are tons of questions about whether or not Carolina is a viable destination for Watson.

One potential point of contention that could quash any potential deal: Watson has a no-trade clause in his contract, which he needs to waive in order for the Texans to execute a trade. If he doesn’t like the idea of playing for the Panthers, he can simply nix the possibility. Should Houston wind up trading him, Watson can at least have some control over where he lands.

In the NFC South division, there’s a lot of uncertainty among at least two of Carolina’s chief rivals. The New Orleans Saints have the NFL’s worst salary cap situation as things stand right now, and the Atlanta Falcons are transitioning to a new head coach and general manager.

The reigning Super Bowl champion Tampa Bay Buccaneers have Tom Brady leading the way at least for the next season or two, and will be hard to stop no matter how their free agency shakes out this offseason. In order to contend with the likes of at least Tampa Bay, it’s obvious Carolina needs to upgrade the quarterback position over incumbent starter Teddy Bridgewater.

Trading away three first-round picks and a unique playmaker like McCaffrey — who’s as lethal of a runner as he is a pass-catcher out of the backfield — robs Carolina of retooling its roster at multiple other spots. Watson’s cap hit is going to be huge once he joins the fold, which will limit the personnel department’s ability to surround Watson with what he needs to contend for a Super Bowl.

One of Houston’s main failures has been protecting Watson. Some of that is on the QB extending plays sometimes ill-advisedly with his feet, but a lot of it is simply lackluster pass protection that’s put him in harm’s way. The Panthers are likely to franchise tag right tackle Taylor Moton, but could lose Russell Okung to free agency, and will need to pay him. The interior of the o-line really needs work, too.

Plus, the young Panthers defense has several holes, and just released Pro Bowl defensive tackle Kawann Short in a cost-cutting move on Tuesday.

All that said, Watson is a dual-threat dynamo who thrived despite horrid circumstances in Houston to lead the NFL in passing yards last season. He can cover for a lot of deficiencies, and inject new life into this new era in Carolina. Although he’d miss someone as uniquely skilled as McCaffrey, running backs are generally replaceable, and the Panthers have two excellent wideouts in Robby Anderson and DJ Moore in the fold already.

There’s a lot of merit to Carolina spending, say, two first-rounders, retaining McCaffrey, and moving up from eighth overall in the 2021 NFL Draft and selecting a much cheaper rookie signal-caller such as Zach Wilson, Justin Fields or Trey Lance.

It doesn’t seem like the Panthers are very interested in waiting for this rebuild to come to fruition. Most teams are a quarterback away in the NFL depending on who that quarterback is, and someone as uniquely skilled and exceptional as Watson doesn’t come around very often.

Look for Carolina to make a big push in the Watson sweepstakes — and potentially outbid other suitors such as the New York Jets and Miami Dolphins to land the 25-year-old’s services.