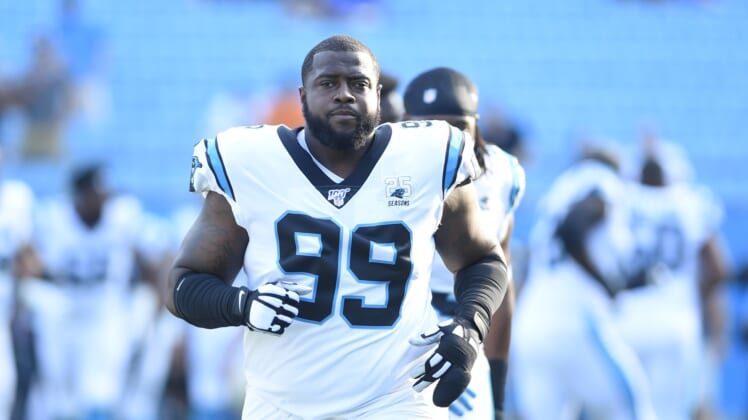 The Carolina Panthers are moving on from one of their franchise cornerstones, as oft-injured defensive tackle Kawann Short will be released and hit the 2021 NFL free agency market.

Short appeared in only five games over the past two seasons, but is among the game’s most gifted interior pass-rushers when healthy.

ESPN’s Adam Schefter reported the news of Short’s release, which comes as a bit of a surprise considering Carolina has to eat about $11 million in dead money to pay the 32-year-old not to play for them next season.

Short’s expensive contract and lack of production and availability of late is reason enough for the Panthers to let him go, as the team continues to go younger amid a rebuild under second-year coach Matt Rhule and new general manager Scott Fitterer.

With $8.6 million in salary cap savings created by Short’s departure, per Over the Cap, Carolina can focus on spending where it wants to in free agency with some added cash.

Outlook for Carolina Panthers, Kawann Short after parting of ways

After using all of its 2020 draft picks to address the defense, look for Carolina to be active in continuing to improve that side of the ball with more veteran players who are in the prime of their careers.

Mostly, though, the big priority for the Panthers is finding an upgrade at quarterback over Teddy Bridgewater. They hold the eighth overall pick in the 2021 NFL Draft, and should be in the market to trade up near the top of the first-round order to select someone like BYU’s Zach Wilson or Ohio State’s Justin Fields. The key for Carolina will be to secure a deal before another QB-needy team leapfrogs them on draft day.

As for Short, if he can just come back healthy in 2021, he should have a decent free-agent market. Prior to a recent spate of injuries, Short was among the most durable interior defenders in all of football. The Panthers acquired him in the second round of the 2013 draft, and he didn’t miss a single game in his first five seasons and appeared in 14 of 16 possible contests during the 2018 campaign.

It’s pretty rare that someone with Short’s size (listed at 315 pounds) has the quickness and finesse to be such a factor as a pass-rusher from the inside. Among the 2021 free agents, only Denver Broncos standout Shelby Harris comes to mind as someone in Short’s mold, but even then, he’s lighter and not as stout versus the run as Short has been when he’s at his best.

Rotator cuff and shoulder injuries have prevented Short from making the impact he’s accustomed to in recent years. However, as long as he can work himself back into shape and get his body right, Short could well become one of the best bargain free agents and biggest steals of the 2021 offseason. Look for him to seek out a Super Bowl contender and be fueled by anyone doubting him on a one-year prove-it contract.

With a stellar 2021 season on a championship-caliber team, Short could well position himself for a bigger payday on his final NFL contract should he be available again in 2022.