The Carolina Panthers have their sights set on getting the quarterback position right as they look to accelerate their rebuild during the 2021 NFL offseason. 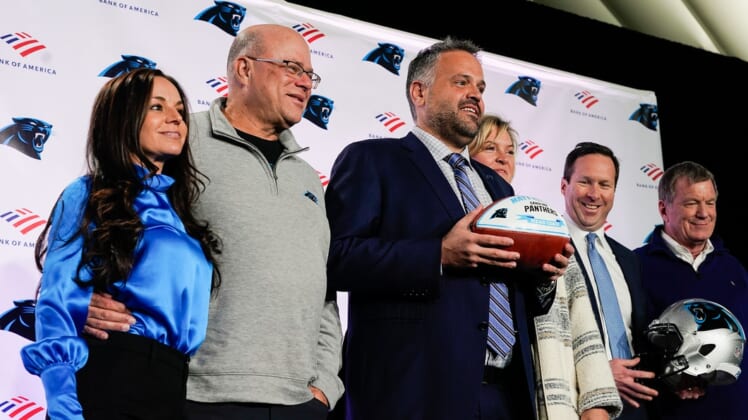 The Carolina Panthers missed out on the Matthew Stafford sweepstakes, but their efforts to upgrade over Teddy Bridgewater at the quarterback position are reportedly far from finished.

According to the latest word out of Carolina, the organization is absolutely determined to land a new face of the franchise to lead its offense in 2021 and well after.

They have an aggressive owner, an aggressive GM, an aggressive coach, and they are all willing to scour the earth for one thing — a long-term solution at quarterback. They don’t seem sold on Teddy Bridgewater.

What’s the full context of Fowler’s remarks? Well, he and two other ESPN reporters among the nine surveyed for the piece project that Carolina will ultimately be the landing spot for Houston Texans superstar Deshaun Watson.

Wow. There are a lot of teams linked to Watson, but the Panthers aren’t often leading the conversation. Usually, it’s the New York Jets and Miami Dolphins who headline the list of Watson suitors, because they own the second and third overall picks in the 2021 NFL Draft. Therefore, they’d provide Houston much more flexibility and power over who would succeed Watson under center.

On the other hand, Carolina does have the No. 8 pick in the first round of this year’s draft, and with all the other assets that may come the Texans’ way in a prospective trade, they could use some of those to maneuver up from that slot.

Per ESPN’s Adam Schefter, Bridgewater was part of a trade package the Panthers offered to Stafford that nearly went through until the Rams outbid them. Bridgewater ranked 29th out of 38 qualifying quarterbacks in Pro Football Focus’ 2020 grades, so it’s clear he’s on the outs in Charlotte.

Should Carolina Panthers draft QB of the future instead?

It’s great that the Panthers aren’t leaving any stone unturned to address their obvious shortcoming at the game’s most important position. What’s tough is, they’re just low enough in the draft that they could miss out on the consensus top prospects, but could also move up from there to, say, No. 3 overall to select either Zach Wilson, Justin Fields or Trey Lance.

Much of who’s available depends on what other QB-needy teams do. There’s always the chance someone could leapfrog Carolina in the order and take its desired signal-caller before the Panthers get a chance to be on the clock.

Pursuing a quarterback who’s fresh out of college is certainly a more cost-effective option for Carolina, as opposed to not only sacrificing draft capital but also valuable cap space to chase someone like Watson. Bear in mind, too, that the Panthers’ entire 2020 draft class was spent on defenders, and most of the team’s offensive line is hitting free agency.

While there are a plethora of weapons on Carolina’s offense between superstar tailback Christian McCaffrey and receivers DJ Moore and Robby Anderson, we saw how Super Bowl LV was decided. Patrick Mahomes and the Kansas City Chiefs got smashed 31-9 by the Tampa Bay Buccaneers because of outmatched pass protection.

It wouldn’t cost nearly the assets to move up several spots in the draft to take a dynamic, dual-threat prospect like Fields or Lance. They both have immense upside in terms of athleticism and arm talent — and depending what the Jets do with their own QB situation, they could emerge as a trade partner for Carolina in the event they don’t pull the trigger on a Watson trade.

With Dallas Cowboys field general Dak Prescott also projected to hit the open market as he remains far apart in contract negotiations with America’s Team, he could be had for a hefty price tag minus any draft assets. That’d be a pretty sweet deal and present a significant upgrade from Bridgewater, too.

Whatever the Panthers ultimately decide to do at quarterback, it’ll be a decision that has a profound impact on their future amid an exciting new era. Fans can take solace in the fact that the organization is well aware of its top priority, and that every avenue will be considered until a viable solution is found.