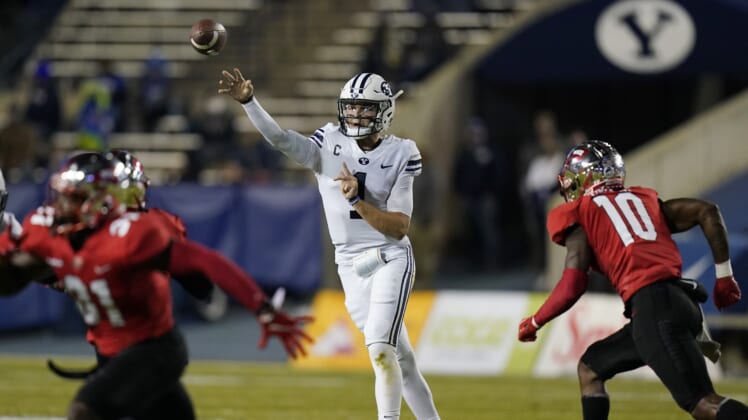 The Carolina Panthers are at a crossroads. They’re coming off a rather encouraging maiden season under head coach Matt Rhule, and are within striking distance of acquiring a top-flight quarterback in the 2021 NFL Draft.

During last year’s draft, Carolina spent all seven of its selections on the defensive side of the ball. Expect a radical departure from that this time around. As the young core players continue developing on defense and the NFC South division is in flux, the Panthers are primed for a chance to land their new QB of the future and level up from Teddy Bridgewater.

Using the full, up-to-date 2021 NFL draft order from Tankathon, here are the top picks Carolina has to play with in the first two days of the draft and who they should target with those assets.

Obviously, this team needs to upgrade at quarterback from Teddy Bridgewater. Unlike Detroit picking just one slot ahead, it feels like the Panthers could well be a QB upgrade away from actually making the playoffs in 2021.

Carolina’s circumstances are more conducive to being aggressive and going to get their “guy” in this draft. Continuity on the coaching staff, and a legitimate young, bright genius of a play-caller in Joe Brady.

Wilson is the type of franchise-changing force that, frankly, the Panthers cannot afford to pass on. They have plenty of weapons between running back Christian McCaffrey and receivers DJ Moore and Robby Anderson. Brady is calling the shots, and Wilson is a seriously gifted passer who can also run.

Perhaps a little less explosive than Fields and Lance, but far and away a more polished passer, Wilson throws with accuracy and touch to all levels of the field. Most important, he throws with anticipation, and yet always seems to play within himself and doesn’t press too much.

Although Fields and Lance aren’t bad prospects in their own right, it just seems like Wilson is above them at this juncture. That’s not to say Fields or Lance can’t develop into NFL stars, because they have that type of potential. In terms of instant impact and overall ceiling, though, Wilson is the one to go with from that talented trio.

Starting Panthers offensive tackles Russell Okung and Taylor Moton are free agents, and while it’s feasible Carolina could re-sign either of them, it’s worth considering some insurance in Round 2. Leatherwood is the latest in a long line of Alabama players who would be an excellent value pick if he’s still on the board here.

Leatherwood can play really any position up front aside from center, so it’d be hard for the Panthers to justify passing up somebody like that at this stage unless free agency goes well. After all, guards Chris Reed and John Miller aren’t under contract for 2021 either.

The safety position is a weakness outside of rising second-year stud Jeremy Chinn, but the arrival of Moehrig would change that really fast. Similar to Chinn in a lot of ways, Moehrig can lay the wood versus the run but also cover very well. His nose for the football earned him seven interceptions at TCU, and putting him alongside Chinn would create a schematically versatile, exceptional young safety tandem, giving Chinn even more free rein to flex to any linebacker spot at any time.

For the past two seasons, defensive tackle Kawann Short has wound up on injured reserve by October. He’s a legitimate trade candidate or someone who could get waived this offseason. Tufele fits in with the youth movement Carolina is trying to go with on defense.

Next to Chinn, Nasirildeen could help Carolina’s back end really quickly, and if he hadn’t torn his ACL in 2019, the Seminoles standout might’ve been considered closer to the top of Round 2 or even as a Day 1 pick.

Carman presents great value, and protected Trevor Lawrence’s blind side very well during their coinciding tenures at Clemson. It’d be helpful to have a mentor like Okung return to the fold and help Carman progress, and in the meantime, Carolina could try him out at guard, which may be where he has more potential at the professional level.

Stills is a great value at this phase of the draft, and makes a lot of sense as a complementary piece alongside 2020 first-round pick Derrick Brown on the interior. Brown is a bulkier, yet still freakishly athletic man in the trenches, whereas Stills is a more finesse player, but someone who plays bigger than his size and can win with excellent lateral quickness and a fast first step.

The absolutely perfect way for the draft to fall is if the Panthers could somehow manage to nab Wilson with the eighth pick, not having to trade anything to get it. Perhaps the Lions, picking seventh, prefer Fields over him, which isn’t out of the realm of possibility. Otherwise, Detroit could go a different direction or find a veteran to replace Matthew Stafford instead of someone through the draft.

That may be the only team Carolina has to worry about, though. Jacksonville will take Trevor Lawrence at No. 1. It seems like the New York Jets will either keep Sam Darnold or trade for Deshaun Watson. The Miami Dolphins have Tua Tagovailoa. Matt Ryan’s job security seems safe under new Atlanta coach Arthur Smith. Cincinnati isn’t moving off Joe Burrow, obviously. Nick Sirianni’s hire as head coach suggests Philadelphia isn’t giving up on Carson Wentz.

Suddenly, it doesn’t seem so crazy that Wilson could fall to the Panthers, or that Carolina won’t have to move up too far to get him. It’ll just come down to what Detroit is or isn’t willing to do at the pick before.

As for the rest of this ideal mock, Leatherwood’s versatility and Nasirildeen’s value at safety later in the draft make them the most appealing combination left.

Considering Carolina has a lot of uncertainty on the offensive line, it’s key to supplement that position group with a mix of free-agent signings and draft picks, especially if it costs something extra to trade up for a quarterback. Otherwise, the new face of the Panthers franchise will be under siege too often as a rookie.