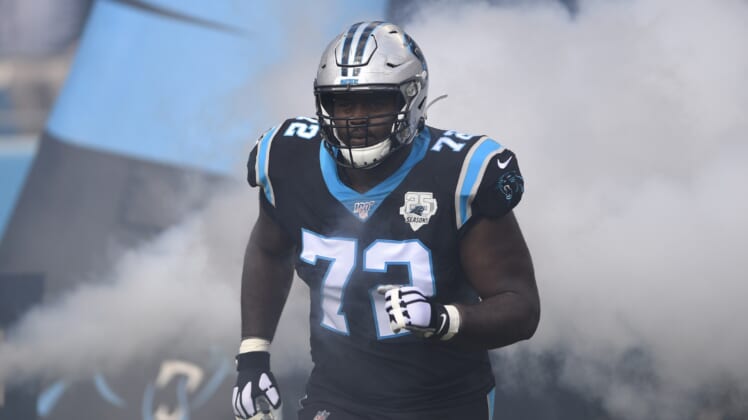 The Carolina Panthers plan to be aggressive this offseason at finding a long-term quarterback. For that franchise passer to be successful, retaining offensive tackle Taylor Moton will be crucial for Carolina this spring.

Since David Tepper took over as team owner, the Panthers haven’t been afraid to make big moves. They hired Matt Rhule as head coach, immediately making him one of the NFL’s highest-paid coaches in his first year on the job. Carolina also reportedly was firmly in the running for Matthew Stafford, offering the No. 8 overall pick.

Related: Carolina Panthers ‘willing to scour the earth’ for new long-term QB in 2021

With the front office keeping that same approach for the remainder of the offseason, their focus is also on doing whatever it takes to solidify this offensive line.

Taylor Moton is one of the top NFL free agents in 2021. A second-round pick in the 2017 NFL Draft, he has developed into one of the best right tackles in football. Set to hit the open market, at a time when teams are desperate for upgrades at the position, the Panthers seem willing to keep him at great cost.

According to CBS Sports’ Jason La Canfora, Carolina will place the franchise tag on Moton this spring. Based on Over The Cap’s projections, that means a one-year contract worth $14.57 million fully guaranteed.

It would make Moton the third highest-paid right tackle in the NFL. Furthermore, the salary would serve as the starting point when the team wanted to engage in talks regarding a contract extension. At a time when the 2021 NFL salary cap is set to drop for the first time in more than a decade, that eats a significant chunk of the team’s cap room.

With that said, he is an integral part of this offense. Moton graded as one of the best right tackles in the NFL last season, per Pro Football Focus, committing just two penalties and allowing only three sacks in 1,032 total snaps. He is also in the prime of his career and rewarding players who developed is always a strong message NFL teams can send to their future draftees.

Whether the Carolina Panthers trade for Deshaun Watson, land a quarterback in the 2021 NFL Draft or stick with Teddy Bridgewater, a strong offensive line is the foundation to this team’s success. With Christian McCaffrey healthy and a quarterback given time to throw to this great cast of receivers, Carolina could surprise a lot of people next season.