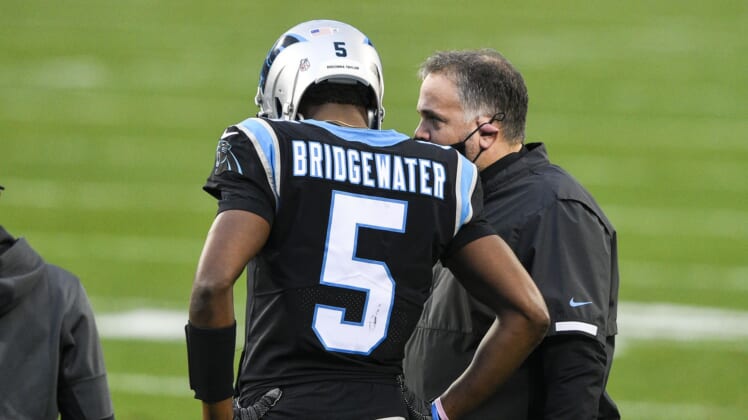 The feel-good story of Carolina Panthers quarterback Teddy Bridgewater might soon give in to the reality that he’s not a starter-caliber player in the NFL.

Nearly five years removed from suffering a devastating leg injury as a member of the Minnesota Vikings, Bridgewater got his opportunity this past season to be a full-time starter.

It did not go swimmingly for the former first-round pick from Louisville. It could also now lead to young Panthers head coach Matt Rhule looking for a new starting quarterback in 2021.

“We’ll see what happens moving forward,” Rhule told reporters on Monday, via ESPN. “Teddy is here. I have a lot of respect for him. I believe in what he can do. I’ve seen glimpses, flashes of us as an offense looking really good. We need to get Christian (McCaffrey) back. We need to have a run game we can rely on.”

The 28-year-old Teddy Bridgewater will be a member of the Panthers in 2021. That much is known. His contract dictates that. Carolina would face a resounding $20 million dead cap hit if it were to release the veteran quarterback. That’s just not going to happen. In no way does this mean, Bridgewater will be the starter.

“With regards to the draft and players, we’ll look at every opportunity to have the best we can have at every position, and that includes the quarterback position,” Rhule continued.

Selecting eighth overall in the 2021 NFL Draft, there’s a chance these Panthers will have an opportunity to find a quarterback of the future come April. Ohio State’s Justin Fields was dropping down draft boards before a brilliant performance in the College Football Playoff Semifinals against Trevor Lawrence and Clemson.

North Dakota State’s Trey Lance could also be a realistic option. As of right now, it seems unlikely that Zach Wilson of BYU will be available short of the Panthers opting to trade up. That is a real possibility.

One of the reasons this is even being bandied about is the performance Teddy Bridgewater in his first season with the Panthers. Simply put, he was a bottom-10 regular starter around the NFL.

Bridgewater did complete north of 69% of his passes with 3,733 yards. However, the quarterback threw just 15 touchdowns against 11 interceptions in 15 starts while leading a scoring offense that finished in the bottom half of the league.

To say that Bridgewater and his Panthers offense was impacted by Christian McCaffrey’s injury-plagued season would be an understatement. Fresh off signing a record-breaking contract extension, McCaffrey was limited to three games after compiling an absurd 4,357 total yards and 32 touchdowns over the previous two seasons.

There’s a chance Rhule might opt to run it back with Teddy Bridgewater in 2021, hoping that the quarterback will perform better with a fully-healthy McCaffrey sharing the backfield with him. That could make sense.

Bridgewater’s cap hit of $23 million could also play into that decision-making process. Even then, the young head coach did not necessarily give his quarterback a ringing endorsement one day after Carolina finished up shop on a disappointing five-win season.