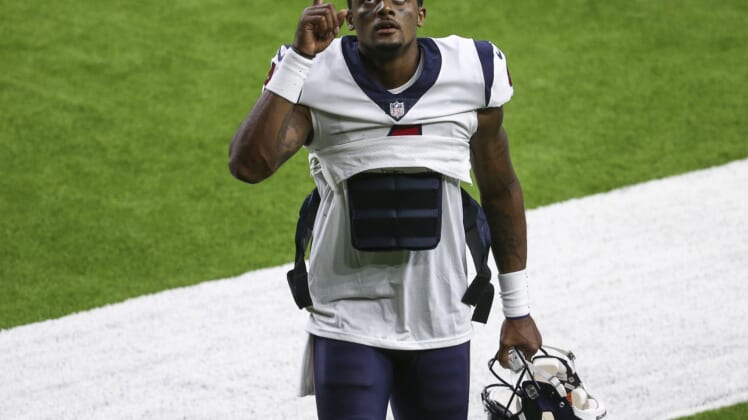 Deshaun Watson gave the Houston Texans the meeting they wanted. If the organization was hopeful head coach David Tepper could change the star quarterback’s mind, Watson dealt a blow to that with a single conversation.

Tensions between Watson and the organization escalated this offseason. After being promised a voice in the hiring process of the new general manager and head coach, owner Cal McNair took the search in another direction. When Houston hired Nick Casero as its general manager, with Watson discovering the news on social media, the division between the two sides intensified.

ESPN’s Dan Graziano reported Thursday that Watson met virtually with Culley last week. While the two have familiarity, working together at the 2019 Pro Bowl, Watson emphasized that he never plans to play for the Texans again.

Related: 5 teams who are a perfect fit for Houston Texans QB Deshaun Watson

It’s a strong stance to take after signing a four-year contract worth $156 million, but the 25-year-old quarterback is sticking to his guns. He made it clear in January that he never wanted to play another snap for the Texans, willing to millions of dollars by sitting out the 2021 NFL season.

A majority of NFL teams have called the Texans trying to inquire about a blockbuster trade. While some have just shown general interest, others are determined to land the star quarterback. But the Texans keep insisting they have zero interest in discussing a deal and won’t even respond to offers.

It hasn’t stopped rival general managers from trying. According to NFL Network’s Tom Pelissero, teams are leaving trade offers via voicemail to the Texans.

Even after Watson’s meeting with Culley, Houston is confident it can salvage the relationship. Given their star’s issues are tied to ownership and team executive Jack Easterby, who McNair vowed not to fire, it’s hard to imagine anything fixing the complete lack of trust Watson has in the organization.

DeAndre Hopkins, J.J. Watt and a team staffer close to Watson are all gone. Meanwhile, Will Fuller is expected to leave in free agency. Every move Houston makes seems to drive Watson further away. Ultimately, the Texans might have to cave by trading their superstar so that they can begin a desperately-needed rebuild.