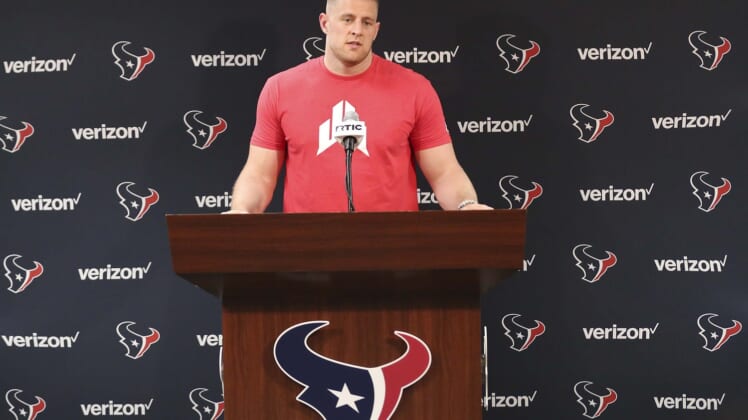 The Houston Texans have released JJ Watt, moving on from the face of the franchise and one of the best defensive players in the NFL for more than a decade.

NFL Network’s Ian Rapoport first reported word of the news. The 31-year-old hinted at a desire to play elsewhere in November and became increasingly frustrated with the organization in recent months. Many around the league expected the two sides to part ways, with a trade viewed as a guarantee. Instead, Houston is releasing its biggest star and the most beloved sports figure in the city.

After word of the news broke, Watt released a video announcing that he requested his release. In the two-minute message, he admitted that he asked the McNair family for his release and that wish was granted. Watt also thanked the fans, his teammates and the entire state of Texas for the support he received during his career.

The Texans likely could have received a Day 2 pick in the 2021 NFL Draft by trading Watt. Instead, releasing him creates $17.5 million in cap space. It’s financial flexibility the organization desperately needs, currently projected to be over the 2021 NFL salary cap.

Watt immediately becomes a free agent and can sign with a club before the 2021 league year begins. A Wisconsin native, the Green Bay Packers will draw plenty of buzz as a potential landing spot. Likewise, the Pittsburgh Steelers are being discussed as a potential home with T.J. and Derek Watt both playing for them. However, both teams are currently over the projected salary cap and have key players they need to re-sign this offseason.

A three-time NFL Defensive Player of the Year and a unanimous selection to the NFL 2010s All-Decade Team, Watt is one of the best players of his generation. The No. 11 pick in the 2011 NFL Draft, he recorded 101 sacks, 61 pass deflections, 25 forced fumbles and scored six total touchdowns in his career.

While Watt is headed out the door, with Houston giving him away for free, Deshaun Watson can’t get free after demanding a trade.

As word spread of JJ Watt becoming a free agent, the NFL world immediately mocked the Houston Texans for getting nothing for him and speculated about where the future Hall of Famer will play in 2021.