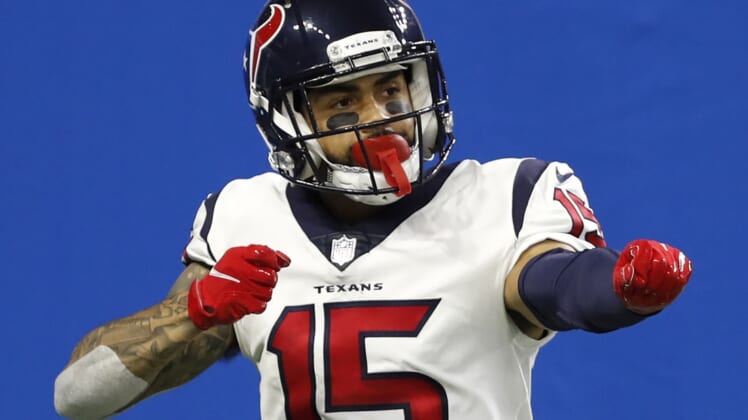 The Houston Texans have already moved on from J.J. Watt and Deshaun Watson wants out as quickly as possible. Now, the team could be on the brink of losing another one of its core contributors from recent years.

Will Fuller, Houston’s first-round pick in the 2016 NFL Draft, has been one of the best vertical threats since entering the league. Partnering with Watson, the two routinely connect for highlight plays. When the Texans traded DeAndre Hopkins last offseason, it opened the door for Fuller to become the No. 1 receiver and he thrived in the role.

Now, as the Texans attempt to convince Watson to stick with them, it seems one of his favorite targets could be headed out the door in free agency.

Houston Texans rumors: Will Fuller likely to sign with another NFL team

The Athletic’s Aaron Reiss analyzed the Texans’ options with the franchise tag. While he didn’t rule out the possibility of Fuller being tagged, the Texans’ beat reporter believes it’s more likely Houston allows the 26-year-old to test free agency. If that happens, the expectation is Fuller signing a one-year contract with another team.

There’s an element of risk with Fuller. In his first five seasons, he only played in 53 of a possible 80 games. For the first four years of his career, injuries were responsible for him being sidelined. That’s what made the 2020 campaign a prove-it year, with Fuller wanting to prove he could stay healthy and be a go-to weapon in an offense.

He did just that. Fuller snagged a career-high 53 receptions for 879 receiving yards, pulling in eight touchdowns and averaging 16.6 yards per catch. The chemistry with Watson was on point and this passing attack was one of the few things going well for the Texans. It all came crashing down for Fuller on Nov. 30 when he received a six-game ban for violating the league’s PED policy.

Fuller will serve the final game of his suspension in Week 1 next season. Between the durability issues and failed test, there are two legitimate concerns for NFL teams to have. As a result, a one-year contract might be in Fuller’s best interest. If he lands in the right spot, Fuller could explode in 2021 and then return as a top free agent before turning 28.

When he’s on the field, Fuller is a dangerous weapon. He is the best receiver on go-routes over the past two years, per Pro Football Focus, leading the NFL in catches (12), receiving yards (450) and touchdowns (five) on that route.

He could be a fantastic fit for teams like the New York Jets, Miami Dolphins and Green Bay Packers. If he’s willing to sign for less to land in a better situation, his list of suitors in free agency will be extensive.