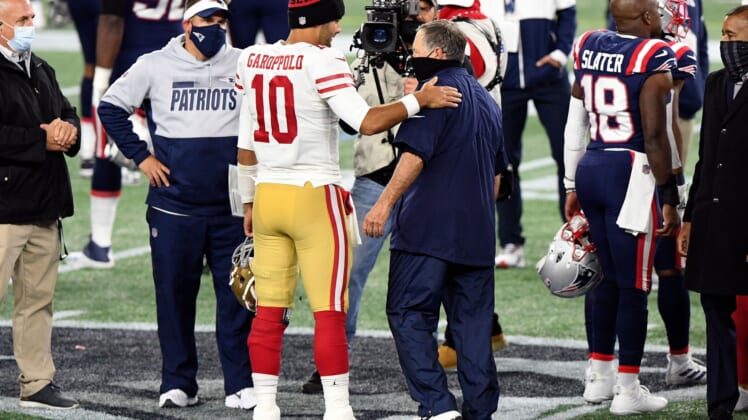 The New England Patriots had a succession plan for Tom Brady a few years ago, then traded Jimmy Garoppolo to the San Francisco 49ers. A few years later, it seems Bill Belichick wants to correct his decision as the team desperately searches for a starting quarterback in 2021.

After Brady left for the Tampa Bay Buccaneers in the 2020 offseason, rumors flew out of New England that the coaching staff loved Jarrett Stidham. Then, just months after hinting how much they believed in his talent, the team signed Cam Newton and made him the starter.

Read More: New England Patriots not sold on Jarrett Stidham, feared ‘debacle’ if he started in 2020

The plan didn’t work out. The Patriots finished with a sub-.500 record for the first time since 2000, while Brady went on to hoist the Lombardi Trophy. With another offseason underway and a new search for a starting quarterback ongoing, Belichick seems to know exactly who he wants under center.

New England Patriots rumors: Jimmy Garoppolo is the team’s ‘Plan A’ at quarterback for 2021

According to The Boston Sports Journal’s Greg Bedard. Garoppolo is still far and away New England’s “Plan A” at quarterback for the 2021 season. In the optimal vision by the organization, they envision their former quarterback returning to New England and taking over as the starter.

The interest in the 29-year-old quarterback isn’t surprising. Belichick thought he got a steal in the 2014 NFL Draft, landing the Eastern Illinois star with the No. 62 pick. However, after being developed by the coaching staff for a few years, Brady grew uncomfortable with his heir being around and wanted him gone. Ultimately, owner Robert Kraft stepped in and the Patriots traded Garoppolo to the San Francisco 49ers during the 2017 season for a 2018 second-round pick.

Now, the Patriots want him back. He is very familiar with Josh McDaniels’ scheme and could be an upgrade as a passer over Newton, while providing a greater long-term solution at the position.

Unfortunately for Belichick and the Patriots, the 49ers seem committed to Garoppolo. Unless the Houston Texans finally agree to trade Deshaun Watson, which is unlikely, San Francisco is ready to ride with the quarterback who started in Super Bowl LIV>

It’s also fair to question if Garoppolo would be successful in New England. The 49ers have a vastly better cast of offensive weapons and Kyle Shanahan is a superior offensive mind and play-caller to McDaniels. Even in a good situation, Garoppolo seemed to be the ceiling on San Francisco’s passing attack last season and doesn’t offer much upside.

Read More: Cam Newton could return to New England Patriots in 2021, Bill Belichick ‘raves’ about him

As of now, the circumstances in New England are much worse. The Patriots have arguably the worst cast of pass-catching weapons in the NFL and Belichick’s recent past of whiffing on wide receivers is troubling.

Ultimately, the New England Patriots might have to settle for bringing Newton back. He should be better with more help at wide receiver and fully recovered from COVID-19. Meanwhile, New England can use the No. 15 overall pick to draft a developmental passer like Trey Lance to develop for a year before making him the face of the franchise.