Cam Newton could return to New England Patriots in 2021, Bill Belichick ‘raves’ about him 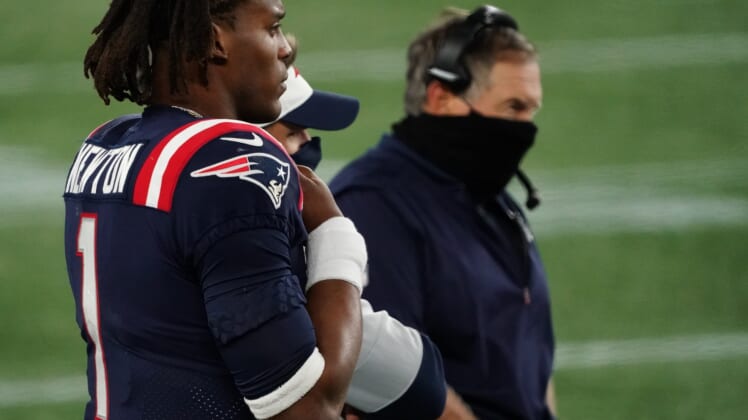 When Cam Newton walked off the field after Week 17, many assumed it would be the last time he suited up for the New England Patriots. As Bill Belichick continues weighing his options, there seems to be an increasing likelihood that Newton returns in 2021.

The Patriots’ efforts to replace Tom Brady in 2020 went poorly. As their future Hall of Famer led his team to the playoffs and eventually the Lombardi Trophy, Belichick’s team finished 7-9 and missed the postseason for the first time since 2008. After years of debating whether the legendary quarterback or coach benefited more from the other, many had their answer.

Cam Newton: 5 teams who are a perfect fit for free-agent QB

Needless to say, Belichick enters 2021 with something to prove. If the Patriots want to rebound in 2021, though, much of it will rest on what the organization does at quarterback.

When New England’s season ended, a majority of fans in New England were ready to move on from Newton. After a hot start to begin his 2020 campaign, things unraveled quickly for the 31-year-old quarterback. After 15 games of evidence, fans saw enough to determine that Newton isn’t worth a roster spot.

Related: Cam Newton pushes back against critics, plans to play in 2021

Belichick seems to strongly disagree. According to the Boston Globe’s Ben Volin, the Hall of Fame coach continues to praise Newton and many close to Belichick say he continues to rave about the effort, leadership and work ethic Newton brought to the team this past season.

Furthermore, per Volin, multiple sources indicated they wouldn’t be surprised if Newton re-signs with the Patriots. While it would take more than the minimum contract he signed last summer, there is still a belief that a reunion is very realistic.

Belichick does reportedly have concerns about Newton’s arm strength. According to Pro Football Focus, Newton finished 14th in quarterback rating (103.0) on deep passes last year., but he made just two 20-plus yard touchdown throws.

Column: Cam Newton could be New England Patriots’ best option at quarterback for 2021

The Patriots’ concerns with his arm strength were evident in how they ran their offense. Newton ranked 34th in deep throw rate, attempting a 20-plus yard pass on just 7.9% of his dropbacks. While he averaged 7.22 yards per attempt, right in line with his 7.3 YPA career average, this offense became predictable with its script that relied entirely on the run and short passes.

COVID-19 is an important element to consider. New England didn’t get the benefit of preseason games to work through things with their quarterback and he signed later in the offseason. Because of the pandemic, teams had fewer practices and that likely made the transition more difficult.

Read More: New England Patriots not sold on Jarrett Stidham, feared ‘debacle’ if he started in 2020

Even more noteworthy, the possible effect COVID-19 had on Newton. He looked sharp through the first three games, then tested positive for the coronavirus. Countless pro athletes have revealed that COVID-19 impacted them for months, even after they were medically cleared to return. Despite all of that, Newton was still a force on the ground with 592 rushing yards and 12 scores.

If the San Francisco 49ers are keeping Jimmy Garoppolo, Cam Newton might be New England’s most realistic option. He could be a bridge quarterback on a one-year deal, allowing the Patriots to use their cap space on offensive weapons. If Belichick actually commits to helping his quarterback with starting-caliber receivers and tight ends, which he failed to do in recent years, Newton could look a lot better next season.