New England Patriots reportedly not sold on Jarrett Stidham, feared ‘debacle’ if he started in 2020 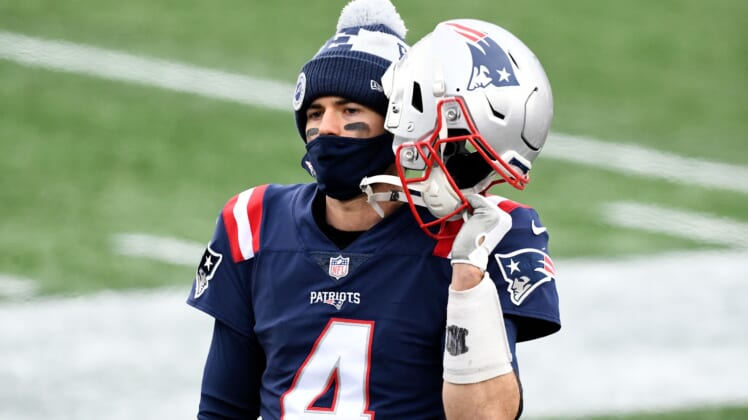 When Tom Brady left the New England Patriots, reports immediately emerged that the organization was very confident in Jarrett Stidham. Despite a quarterback-rich 2020 NFL Draft, New England didn’t take advantage and went into the summer brimming with confidence.

New England didn’t just believe he could be the starter, there was a strong feeling that they would win quickly with him under center. Lacking an identity, reports kept indicating just how much faith the organization had in its young quarterback.

Suddenly, the Patriots scooped up Cam Newton. The quarterback competition was never really close, with Newton running away with the job and Stidham getting hurt. Months after the team’s season ended, we might now have a better picture of how the organization feels about Stidham.

According to Boston Sports Journal’s Greg Bedard, the Patriots’ organization doesn’t have much faith in Stidham. After receiving tons of hype just a year ago, Stidham’s teammates didn’t really buy into him as a starting quarterback and there was generally just a lack of belief in him inside the building.

Stidham, a fourth-round pick in the 2019 NFL Draft, never really stood a chance to win the starting job last summer. He was taken to the hospital after suffering a hip injury last August, sidelining him and allowing Newton and Brian Hoyer to win the top two spots on the depth chart. Even before that, though, the organization grew increasingly frustrated by his performances in training camp.

An offseason that saw Stidham hyped up by the organization and even receiving rave reviews from rival coaches didn’t result in him performing any better. He eventually worked his way up the depth chart during the season, making four appearances off the bench, but there was reportedly concern about ever turning the offense over to him.

Newton didn’t even play well last season and the Patriots almost never went away from him as the starter. Now, with more salary cap space than almost any other NFL team, New England is exploring the trade market for an upgrade at the position.

If the Patriots strike out on Deshaun Watson, Jimmy Garoppolo and Sam Darnold, the only remaining avenues are Marcus Mariota or the 2021 NFL Draft. No matter how this plays out, it’s clear there is little chance Stidham is starting in 2021.