The New England Patriots are expected to have all of their opt-out players back in 2021, per Devin McCourty. Here are some big takeaways from the news. 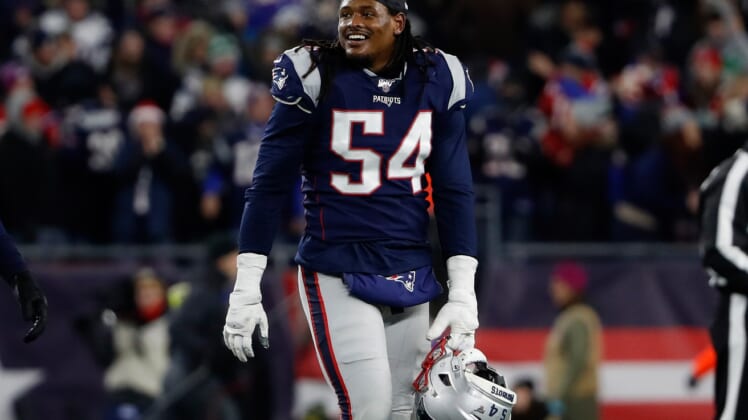 The New England Patriots went into the 2020 season shorthanded due to some of their significant players opting-out due to COVID-19. Players such as Dont’a Hightower, Patrick Chung, Marcus Cannon, and Brandon Bolden were among a group of players who opted out of the season.

However, all of the players who opted out of the 2020 season are expected to be back, according to Patriots safety Devin McCourty. The 33-year-old safety said on a podcast, “From my understanding, they’ll all be back – (Brandon) Bolden, (Dont’a) Hightower, (Patrick) Chung, so I can’t wait. Those are my guys. (Marcus) Cannon.”

This is a huge boost for the Patriots as they enter the offseason with many holes to fill. Here are some takeaways from the news.

Marcus Cannon returning in the 2021 season would be a huge boost for the Patriots, with the uncertainty of their offensive line. Joe Thuney, who was applied the franchise tag last offseason, will most likely not return and David Andrews is also scheduled to be a free agent.

If Thuney doesn’t return next year, it will allow Michael Onwenu to take over at left guard for him instead of right tackle, where he spent a lot of last season. There’s also insurance with Onwenu in case Andrews leaves and Thuney does not. Andrews is more likely to return at this point based on cost.

Cannon isn’t as good as he used to be, but New England getting back its starting right tackle back would be big, given it struggled to contain the defensive line in many games last season. His return gives the Patriots more flexibility next season.

Dont’a Hightower was among the players who opted out heading into the 2020 season. Hightower’s absence was very noticeable as the Patriots had one of the worst linebacker groups in the NFL. While Ja’Whaun Bentley was the anchor of the group, there were not many quality pieces around him.

Hightower is the leader of the defense and has been the play-caller in the past. The 30-year-old linebacker would provide a bigger impact than any player returning from the opt-out year. Hightower totaled 71 combined tackles and 5.5 sacks in the 2019 season.

There were rumors that Hightower could retire, but it sounds like it will not be the case. He will carry a $12 million cap hit going into next season as the defensive anchor of the New England Patriots will try to lead the defense to another Super Bowl appearance.

What should the New England Patriots do with Patrick Chung?

It was reported a few weeks ago that Patrick Chung would return to the New England Patriots next season and today is even more proof that the 33-year-old safety will return. The good thing for New England was that if he didn’t return, they had enough in their secondary to compete without him.

Now, with him potentially returning next season, there could be an excess of safeties in their secondary. Adrian Phillips, 28, was one of New England’s best defensive players last year and played a hybrid role between linebacker and safety. Phillips totaled 109 tackles, one sack, and two interceptions in a strong season.

Kyle Dugger was also impressive last season as a rookie. He was drafted in the 2nd round in the 2020 draft and was the Patriots’ first selection. Many have named Dugger to be the replacement for Chung since he is now 33-years-old. Dugger should have a significant role within the defense next season.

The best thing for the Patriots to do would be to use him as an on-field coach for the secondary, putting him in mismatches against tight ends. There are several routes New England can take, but the one thing it won’t do is part ways with him since it would eat into their cap space.

This news for the Patriots is very significant as it will help fill some positions of need for this offseason. If McCourty proves to be correct, there will be a lot of happy faces in Foxborough.