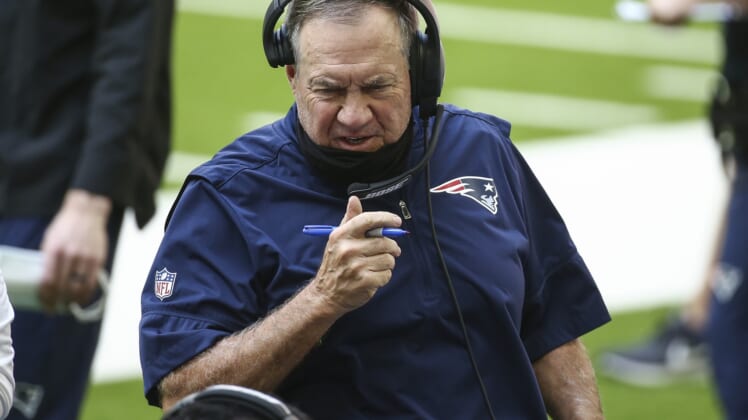 The New England Patriots whiffed on their attempts to replace Tom Brady in 2020. Cam Newton was a shell of his former self and Jarrett Stidham failed to impress the coaching staff or his teammates. As Brady celebrates a Super Bowl title with his new team, Bill Belichick is searching everywhere for a quarterback.

Everything went wrong for the Patriots in 2020. Multiple impact players opted out due to COVID-19, star corner Stephon Gilmore regressed, the offense was one of the worst in the NFL and the team missed the playoffs for the first time since 2008. Coming off a seven-win season, while the coaching staff remains in place, significant changes could be looming for New England this offseason.

Related: New England Patriots reportedly not sold on Jarrett Stidham, feared ‘debacle’ if he started in 2020

According to The Athletic’s Jeff Howe, the Patriots have been ‘aggressively perusing’ the quarterback trade market this season. Unfortunately for Bill Belichick, inflated prices have prevented them from landing an upgrade at the NFL’s most important position.

New England made a run at Matthew Stafford when the Detroit Lions made him available. But the Patriots came up well short in negotiations, only offering a second-round pick as the primary asset in a deal. The Carolina Panthers were willing to package Teddy Bridgewater and the No. 8 overall pick. Ultimately, the Los Angeles Rams landed Stafford by sending Jared Goff, two future first-round picks and their 2021 third-round selection.

After missing out on Stafford, New England turned its attention toward Carson Wentz. He desperately wanted out of Philadelphia and Belichick made an inquiry, hoping to buy low on the quarterback. But New England seemingly never came close to meeting the asking price, with the Indianapolis Colts offering their 2021 third-round pick and a conditional 2022 second-round selection.

There are other options available. Deshaun Watson desperately wants out, but the Houston Texans aren’t even listening to offers. Sam Darnold is another buy-low candidate, but the New York Jets could slow play things before deciding. With Kirk Cousins and Derek Carr both staying, there are fewer candidates. As for Jimmy Garoppolo, who new England would love to bring back, the San Francisco 49ers seem poised to keep him.

Any quarterback who there was even a slight chance could be available, New England reportedly called on. Quite frankly, it wouldn’t be a surprise if they were one of the teams who checked on Russell Wilson, only to be rejected by the Seattle Seahawks.

With so many options being taken off the board, New England might realistically have three options left. While each offers some upside, there are also plenty of negatives.

Marcus Mariota is available and the Las Vegas Raiders would likely be more than willing to trade him for draft picks. He is playing on a reasonable salary, in the final year of a two-year contract, and might be an intriguing fit in Josh McDaniels’ scheme. But this is the same quarterback who completed just 59.4% of his passes and averaged only 171.9 passing yards per game in 2019 with the Tennessee Titans. The Patriots don’t exactly have the receiving corps capable of elevating a quarterback’s play, either.

New England could also trade up in the 2021 NFL Draft. Justin Fields, Trey Lance and Zach Wilson are all exciting quarterback prospects and each will probably be taken with top-10 picks. Any of the trio could start for the Patriots in 2021 and would finally give the organization a long-term answer at quarterback. But trading up from the 15th pick would likely require sending multiple Day 1 and Day 2 picks.

Finally, there is Mac Jones. He thrust himself into the Heisman Trophy consideration last season at Alabama and is ready to start for an NFL team. He will be available at No. 15, but he doesn’t offer the kind of upside to merit that spot.

The dream scenario for the New England Patriots is a blockbuster deal for Watson. Since that’s unlikely to happen, Belichick will likely have to settle for a risky alternative and that will make proving he can win without Brady even more challenging.