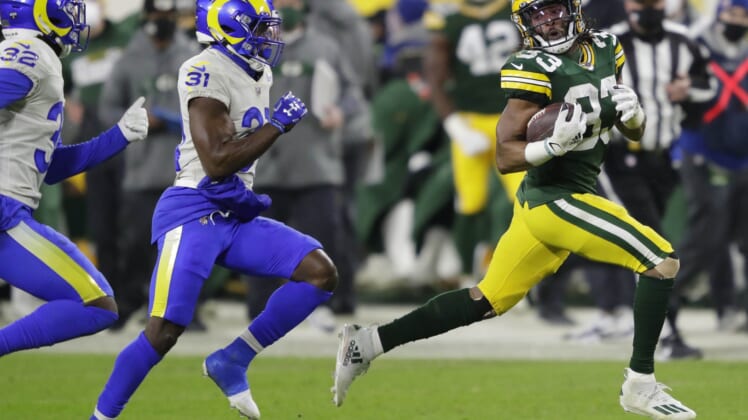 Coming off their first losing season since 2000, the New England Patriots are going to have a ton of work to do during NFL free agency. They need a new quarterback, multiple receivers and a proven running back.

More than anything, the struggles we saw from Bill Belichick’s squad in 2020 was about the skill positions on offense. Cam Newton was atrocious under center. Former first-round picks, running back Sony Michel and wide receiver N’Keal Harry, failed to live up to expectations.

This should lead to a relatively busy NFL offseason for Belichick and Co. This is magnified by the fact that the Patriots are currently $64.19 million under the estimated salary cap. Below, we look at five free agents the New England Patriots should target.

Slot guy Jakobi Meyers led all Patriots receivers with 59 receptions a season ago. The youngster will undoubtedly play a big role in New England’s offense next season, regardless of who is under center at quarterback. Outside of that, New England’s two leading pass catchers from this position hauled in a combined 80 passes.

That’s where the 27-year-old Robinson comes into play as a potential target during NFL free agency. Robinson hauled in 102 passes for 1,250 yards while boasting an absurd 67% catch rate. He’s been among the most-productive wide receivers in the league over the past couple years. Likely to move on from the Chicago Bears in free agency, Robinson is likely looking at $20-plus million annually. New England can afford that.

It seems to be pretty clear that the Patriots are not going big-game hunting on the NFL trade block. They were not in on either Matthew Stafford or Carson Wentz before both quarterbacks were dealt. We’re also not hearing a lot about New England going after disgruntled Houston Texans signal caller Deshaun Watson.

What does this all mean? Regardless of whether the Pats go quarterback in the first round of the 2021 NFL Draft, they are likely going to need a stopgap option. Fitzpatrick could be the best of the bunch. The 38-year-old signal caller threw for 5,620 yards with 33 touchdowns against 21 interceptions in 20 starts for the Dolphins over the past two seasons. Give him some weapons, and he could excel in Josh McDaniels’ offense.

As bad as New England’s wide receiver group was last season, its tight end position was even more porous. Players at this position caught all of 18 passes, the lowest number in the NFL. As we saw previously with Rob Gronkowski in New England, McDaniels’ offense can be fun for tight ends. It is also reliant on this position to an extent.

Could New England exhaust some of its financial capital to bring in this up-and-coming 25-year-old tight end? It could make a ton of sense. Smith recorded 41 receptions for 448 yards with eight touchdowns with the Titans a season ago. This came with former Titans tight ends coach (and current Falcons head coach) Arthur Smith running the ship on offense. These two things coupled together lead me to believe Smith has Pro Bowl upside. He’d be a perfect fit in New England.

Defense was not necessarily an issue for the Patriots a season ago. They allowed the seventh-fewest points in the NFL. Opposing quarterbacks threw just 22 touchdowns against 18 interceptions. Yeah, Belichick knows what he’s doing on that side of the ball. With that said, pass rush was an issue. New England recorded all of 37 sacks without a single player registering as many as six.

Recently released by the Houston Texans, this three-time NFL Defensive Player of the Year could change things on a dime. Sure Watt has seen a downtick in production in recent seasons, but that’s primarily due to him being double-teamed the second-most times in the NFL behind Aaron Donald. He’s going to rebound in 2021. Perhaps, New England trades Stephon Gilmore and replaces his contract with Watt. The team could then double down on the edge position in the first round of the 2021 NFL Draft if it is able to address needs on offense via the remainder of free agency.

We already know that Belichick is not one to spend a lot of money at running back. We also know just how poorly that has turned out over the past couple seasons. In 2020, the Patriots finished fourth in rushing yards. However, a lot of that had to do with the mobile Cam Newton. Damien Harris was the leading rusher at this position with less than 700 yards.

While Harris might have a bright future, he does not bring the dual-threat ability we’ve seen from Jones in Green Bay. The former mid-round pick has caught 96 passes the past two seasons. A move of this ilk would enable New England to let James White walk in free agency while potentially finding a trade partner for Sony Michel. It might cost top-five running back money, but Jones would be worth it for New England.