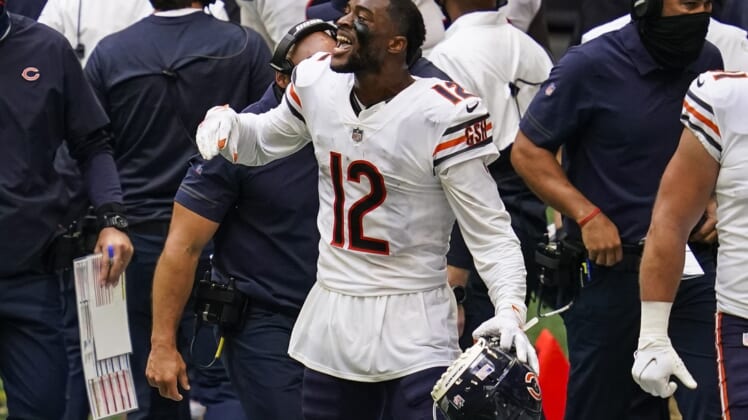 Allen Robinson has been dragged down by poor quarterback play with the Chicago Bears for years. Set to be a free agent this offseason, the Pro Bowl wide receiver seems destined for the franchise tag. Fortunately, he might still be able to get away from quarterback purgatory thanks to a sign-and-trade.

The 2021 NFL offseason has already seen multiple blockbuster trades go down. Matthew Stafford and Jared Goff swapped places in a monumental move. Then, Carson Wentz got his wish with a trade to the Indianapolis Colts. Even bigger moves could be looming, thanks to Deshaun Watson and Sam Darnold generating a bunch of interest.

Don’t think it will only be an active quarterback carousel this spring. With the likes of Allen Robinson, Chris Godwin, Kenny Golladay and JuJu Smith-Schuster, there could be a ton of wide receivers teaming up with new quarterbacks in 2021.

Entering the offseason, Chicago Bears head coach Matt Nagy and general manager Ryan Pace are working with their jobs on the line. While much of the spotlight centers around their plans to replace Mitchell Trubisky, there are plenty of other roster issues. Among them, the complete absence of a go-to weapon currently on the 2021 roster.

The Bears have a decision to make within the next month, but that call might already be made. Robinson is expected to receive the $18 million franchise tag, ensuring that he is under contract for next season. While it will keep one of the NFL’s best receivers off the open market, where he could freely sign with another team. his return to Chicago isn’t certain.

Chicago Bears rumors: Allen Robinson trade could be in the cards this offseason

If the Bears can’t land Watson or Darnold, the team will quickly run out of options. Trading up into the top-10 of the 2021 NFL Draft is unlikely, leaving Chicago with unappealing options to replace Trubisky. If that happens, trading Robinson away feels even more likely. With that in mind, let’s examine some realistic trade destinations.

Baltimore desperately needs to find a No. 1 wide receiver for Lamar Jackson. Marquise Brown is fine in a complementary role and Mark Andrews is an excellent tight end, but nothing beats a receiver who a quarterback can always trust to get open. Robinson dealt with one of the worst quarterbacks in the NFL and still finished as Pro Football Focus’ No. 5-graded receiver. He is a force to be reckoned with, leading the NFL in contested catches (47) across the past two years.

Robinson would easily be the best receiver Jackson ever had, putting him in a better position to return to that NFL MVP form. Plus, Chicago and Baltimore might be nice trade partners. Orlando Brown Jr. wants out because of his desire to play left tackle, a glaring area of need for the Bears. Because Brown Jr. plays a more premium position and costs significantly less, Chicago will likely need to attach a draft pick. With that said, this could be a trade where both sides are winners.

The New York Giants remain committed to Daniel Jones. It’s a kind of confidence we wouldn’t have in a quarterback who has failed to improve after two seasons, but that’s for another day. If Dave Gettleman and Joe Judge are going to keep betting on their “franchise” quarterback, however, he deserves a legitimate go-to weapon.

Robinson can make bad quarterbacks look better than they are, he’s done it for his entire career. He would step in perfectly as the No. 1 receiver in New York’s offense, kicking Sterling Shepard into a secondary role and making Darius Slayton more of a vertical threat. Spending a second-round pick to land an impact receiver then allows the Giants to strengthen the defense with their first-round pick.

The Patriots missed out on Stefon Diggs last offseason, we saw the results striking out had on this offense. Blame will fall on the quarterback’s shoulders, but this receiving corps is beyond problematic. If Bill Belichick wants this team to have any shot at competing in 2021, the offense needs an overhaul and far more talent must be added.

Sending a second-round pick to acquire a Pro Bowl receiver in his prime should be an acceptable price to every team that needs a weapon. The Patriots also have more than enough cap space to sign Robinson to a lucrative extension, with plenty of money left to address other needs. With ARob on the field, life will be a lot easier for whoever inevitably becomes New England’s quarterback in 2021.

The Colts have demonstrated a willingness to be aggressive and this front office values impact talent over the uncertainty of draft picks. A year after trading its first-round pick for DeForest Buckner, Indianapolis just traded two picks for Wentz. While reuniting with Frank Reich might help him turn things around, he also needs more pass-catching options around him.

With T.Y. Hilton likely departing in free agency, the Colts need more at wide receiver. Michael Pittman Jr. can be a No. 2 option in this passing attack and Parris Campbell, if healthy, should be a nice complementary option. What this team lacks in dominance at the position, Robinson can fill that void. Wentz would also be an upgrade over anything ARob had before, potentially leading to both players helping one another. The Colts have the cap room to pull this off and this is a deal that helps them become a Super Bowl contender.

The Jets first target on the trade market should be Deshaun Watson. If that doesn’t work out, whether they keep Darnold or draft a quarterback with the No. 2 pick, trading for Allen Robinson should be a priority. Speed is nice at receiver and it’s a trait this team has enjoyed, but Robinson is special in his own way. We’ve seen the importance a great pass-catching weapon can have in a Shanahan-style offense, so Robinson would fit nicely in Mike LaFleur’s scheme.

Sending the No. 34 selection might seem costly, but it’s a move this team can manage. Darnold can be flipped for a second-round pick to replace it and the Jets already have two first-round picks this year. The Bears would be elated to land a selection in the range where they can land an offensive tackle with a first-round grade. This would be a win-win scenario for both teams.