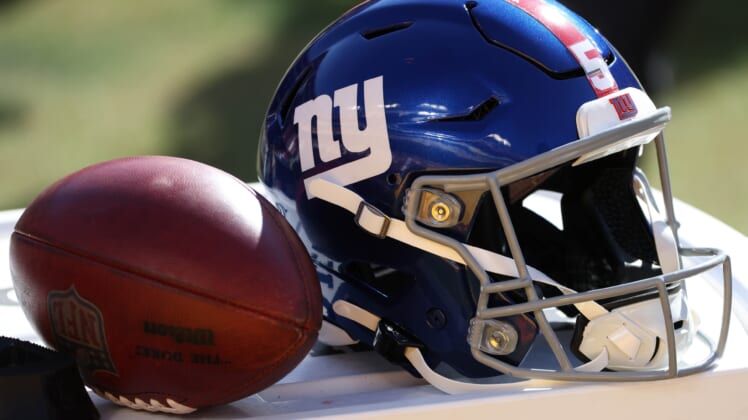 Nov 8, 2020; Landover, Maryland, USA; A view of the helmet of New York Giants kicker Graham Gano (not pictured) next to a ball on the sidelines against the Washington Football Team at FedExField. Mandatory Credit: Geoff Burke-USA TODAY Sports

The New York Giants draft picks will put this team in a position to build the kind of team identity head coach Joe Judge desires. While general manager Dave Gettleman is coming back this offseason, Judge’s fingerprints will be all over the 2021 NFL Draft.

Many questioned the hiring of Judge when New York announced its surprising decision. However, the first-year head coach did an excellent job establishing an early identity for the team and got the locker room to buy in on his vision. With the Giants entering the offseason with a clear direction, this team could be on the verge of returning to prominence in the NFC East.

As we look ahead to the 2021 NFL Draft, here are targets and a mock draft for the New York Giants draft picks.

Credit to the Giants for really starting to put together an impressive defense. Recent offseason acquisitions of James Bradberry and Blake Martinez gave New York a shutdown cornerback and a Pro Bowl linebacker this past season. Paired with Dexter Lawrence, Dalvin Tomlinson and Leonard Williams being disruptive on the defensive interior, there was a lot to like about this group.

With that said, there are plenty of improvements that can still be made. The No. 2 cornerback spot is an Achilles’ heel of this defense and upgrades could still be made at inside linebacker alongside Martinez. Plus, no defensive coordinator can ever have enough talented edge rushers.

We also need to see some of the Giants draft picks devoted to offense. Whether Daniel Jones can be a franchise quarterback or not, he needs more playmakers in 2021. If it doesn’t come from free agency, then New York needs to spend at least a Day 2 pick on an offensive weapon.

Related: Top NFL draft prospects who opted out in 2020

In a dream scenario, Kwity Paye is available for the New York Giants. This is a franchise seeking physical players, those who can get into it during battles with the trenches and win the brawls. Not only would Paye improve New York’s pass rush, but he is also strong against the run. Pair him with the talent up front this team already has and they will have one of the best run defenses in the NFL.

The Giants might love to land Kwity Paye. But with the Denver Broncos and Dallas Cowboys standing in the way, though, it seems unlikely Paye falls. Fortunately, things could still work out quite well for New York. Micah Parsons opted out of the 2020 college football season, but many still consider him a top-10 talent. A gifted athlete at linebacker with great instincts, he can do everything Patrick Graham asks of him.

We also have to think about Daniel Jones. A lot of evidence from the past two seasons points to him not being a quarterback capable of pushing his team to the NFL Playoffs. With that said, he doesn’t have the benefit of game-changing threats on the outside. Waddle might be Alabama’s best receiver, which says a lot given DeVonta Smith just won the Heisman Trophy.

James Bradberry played at an All-Pro level this past season. The problem, opposing quarterbacks just looked away from him and started targeting Julian Love (127.2 passer rating allowed in coverage). For this to become an elite defense, the Giants need another outside cornerback. Campbell is physical, can stick in man coverage and would perform well when matched up against No. 2 receivers.

The Giants need to do a better job at creating pressure in 2021. According to Pro Football Reference, New York ranked 16th in quarterback hurry rate (9.6%) and 12th in sacks (40) this past year. While those numbers are acceptable, reducing the time a quarterback has to throw eases the burden on the secondary. Basham wins with power off the line, using his strength and size to outmuscle offensive tackle. With the right coaching, which New York offers, he could rack up eight-plus sacks each year.

Amon-Ra St. Brown didn’t always have the most consistent quarterback play at USC, but he produced. While he doesn’t have tremendous size as a 6-foot-1 receiver, he knows how to win the 50-50 battles in the air. He can also create separation, using that little distance to snag short passes and take them for big gains.

After starring at Temple, racking up 39.5 tackles for loss and 26 sacks in three seasons, Quincy Roche transferred to Miami. While he didn’t make quite the impact as a pass rusher that he hoped (4.5 sacks), he still proved himself to be a Day 2 talent. This 6-foot-4 edge rusher is well beyond his years in terms of combat in the trenches, knowing exactly how to use his hands to disengage from blocks and freeing himself to create penetration.

NFL teams take notice of size and that’s certainly something Mukuamu offers. A 6-foot-3 cornerback with long arms and a willingness to play physical football, he fits New York’s mentality. The coaching staff might have to work with him on how he uses his hands to jam and grab receivers, but the tools exist to be an outside cornerback in the NFL.

One of the best parts of the offseason is putting together mock drafts and simulating through different scenarios. With the help of The Draft Network’s 2021 NFL Draft simulator, we did that with the Giants draft picks.

We kick off our Giants mock draft with the perfect partner for Blake Martinez. Complementary skills are important and what Martinez lacks in athleticism, Parsons can more than account for. Patrick Graham can deploy Parsons as a blitzer or drop him back in coverage, while Martinez focuses on filling running lanes and stuffing the ball carrier.

Amon-Ra St. Brown can become a No. 2 receiver in New York’s offense. Whether he lines up in the slot, getting open underneath for quick gains or runs vertical routes on the outside. Even as a rookie, he’d quickly prove to Daniel Jones that this is a receiver who can be trusted to make contested catches. Having a player like that will infuse plenty of confidence in a quarterback, elevating his game.

We couldn’t go too long without spending one of the Giants’ draft picks on an edge rusher. While Roche isn’t a freak athlete, he is a pro-ready player and that’s valuable for a franchise that needs instant contributors. Pairing him with Parsons takes this front seven to the next level, arguably solidifying this group as a top-10 defense in 2021.

The Giants need to stop using Evan Engram as a blocker, freeing him just to make plays as a receiving threat. For that to happen, we give them a tight end willing to block. At 6-foot-5, Long is a 253-pound player with the size and desire to take on NFL linebackers and edge rushers. He won’t ever be a great pass-catching threat, but he’s versatile enough to contribute in multiple aspects.