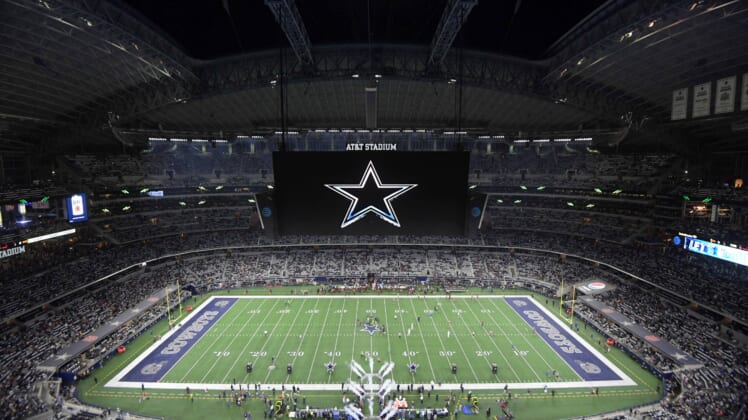 Nov 30, 2017; Arlington, TX, USA; General overall view of AT&T Stadium with the Dallas Cowboys logo on the video board during an NFL football game between the Washington Redskins and the Cowboys at AT&T Stadium. Mandatory Credit: Kirby Lee-USA TODAY Sports

The Dallas Cowboys draft picks are a lot higher in the 2021 NFL Draft than many anticipated before the season began. Following a disappointing year, with injuries on offense and alarming problems on the defensive side, Jerry Jones and Co. will have a lot of work to do this offseason.

While the Cowboys will have some cap room in 2021, much of it is likely headed toward a new contract for Dak Prescott. So, there will be little financial flexibility for the organization to address needs on the defensive side. Given how many holes exist on defense, with Dan Quinn taking over the position, additions will come via the 2021 NFL Draft.

With that mind mind, lets explore the Cowboys’ draft pick in 2021 and how they can address their needs.

While the defense is this team’s biggest issue, there were other signs of trouble in 2020. Season-ending injuries to offensive tackles Tyron Smith and La’El Collins quickly showed how thin this offensive line is heading into 2021. GIven Smith’s durability is becoming a recurring problem, it might also be time to start thinking about a left tackle for the future.

It might even be wise for Dallas to look into tight ends. We see more 2TE sets in the NFL and Dallas doesn’t have many compelling options behind Blake Jarwin. Of course, with Andy Dalton departing in free agency, finding a backup quarterback could also be an option.

When building a 2021 NFL Draft board for the Cowboys, two names really jump out as ideal fits. Kwity Paye, Michigan’s breakout edge rusher, is a standout schematic fit for Dallas. He’ll live with his hand in the dirt as an immediate three-down defender along the defensive line. The Draft Network’s Kyle Crabbs has compared him to Ezekiel Ansah, who was a 2015 All-Pro before injuries slowed him down. Paye’s athleticism, strength, and size get the job done as both a run defender along the edge and a pass rusher.

Surtain II might be the top cornerback prospect in the 2021 NFL Draft. He’s an outside cornerback who can align in man coverage, showing the ability and size to get physical with receivers. While he’ll likely never lead the NFL in interceptions, Surtain would rack up a ton of pass deflections. Plus, it would be fitting to reunite him with Trevon Diggs as an Alabama duo on America’s Team.

For most of the season, Penei Sewell was talked about as a lock to be a top-five pick. But The Athletic’s Dane Brugler and NFL.com’s Daniel Jeremiah, two top draft insiders, have both shared that the league isn’t quite as high on Oregon’s left tackle. If Sewell falls to the No. 10 overall pick, he must be considered by the Cowboys. He can start on the interior as a rookie, while learning from great coaching, before eventually replacing Smith at left tackle.

NFL fans know they are getting old when Asante Samuel’s son is headed for the league. Samuel Jr. will be drafted a lot higher than his father (fourth-round pick in 2004), too. Like his father, he shows tremendous instincts in coverage, displays a great eye for the football and knows how to make plays. He likely won’t be a No. 1 corner in the NFL, but we’re talking about a defensive back who will snag plenty of interceptions.

If Dallas grabs a cornerback in the first round and doesn’t see a compelling edge rusher with its second-round pick, this is where an offensive tackle could be taken. Mayfield played right tackle at Michigan and there’s a shot for him to stick there at the next level. If not, which Dallas would discover quickly, he kicks inside to guard and serves as a bulldozer that creates running lanes.

Jaelan Phillips is a wild story. The No.1 recruit by 247 Sports in 2017, injuries nearly ended his football career before becoming anything. A second chance at Miami led to a breakout season with 15.5 tackles for loss and eight sacks. At 6-foot-5 with a long wingspan and good hands, he can rip through blockers and get to the quarterback.

Deonte Brown is a massive human being as a 6-foot-4, 350-pound guard. With so much size and strength in his body, moving him when he gets his feet set feels like pushing an apartment building for defenders. He struggles against more explosive defensive linemen, but all it takes is for him to get his power in someone’s chest for the matchup to be over.

Walker Little hasn’t spent a ton of time on the football field as of late. He missed a majority of the 2019 season with a torn ACL and then sat out 2020 to prepare for the 2021 NFL Draft. Those are reasons to be concerned, but then the profile will pull teams in on him. A 6-foot-7 tackle with tremendous length, natural power and football intelligence. At his best, he thrives in pass protection and could be groomed into a solid left tackle. But, we don’t know how he looks after nearly two years away from snaps.

Marvin Wilson might regret playing for the Seminoles in 2020. If he opted out, we’re likely talking about a potential first-round selection. Instead, he got pushed around this season and it was later revealed that he played through an injury before undergoing season-ending surgery. Wilson profiles as a situational pass rusher on the interior, which is something NFL teams always want to add to their defense.

Related: Top NFL draft prospects who opted out in 2020

Jaylen Twyman’s decision to opt-out of the 2020 season didn’t pay off. Coming off a 10-sack campaign in a breakthrough sophomore season, he would let that one year of film speak for itself. Even with months devoted to preparation, teams will likely still believe this is an undeveloped interior pass rusher. He’s got a frame to add strength and a willingness to learn how to shed off blocks, but those are still things that must be worked on. As a late Day 2 target, though, he is appealing.

It’s not a great year to need a safety, but there are intriguing options in the 2021 NFL Draft. For teams seeking a true deep safety, Cisco can be that guy. He snagged 12 interceptions and 14 pass deflections in his first two seasons at Syracuse before opposing quarterbacks eventually caught on. A lower-body injury suffered during pregame routines ended his season after two games, but teams saw enough. Quite frankly, Cisco seems like an ideal fit for what the Cowboys need.

One of the best parts of the offseason is putting together mock drafts and simulating through different scenarios. With the help of The Draft Network’s 2021 NFL Draft simulator, we did that with the Cowboys draft picks.

Dallas will likely find itself in a win-win situation with the No. 10 overall pick. Since four quarterbacks are likely to fall within the top-10 picks, either Patrick Surtain II or Kwity Paye should slide to the Cowboys. If they don’t, it could mean that Penei Sewell made his way down and he should be the pick.

In this instance, we snag Paye. He fits so many of this team’s needs and will fit into Dan Quinn’s scheme nicely. On obvious running downs or short-yardage situations, he can play opposite DeMarcus Lawrence. With both forces containing the outside running lanes, pushing running backs to the inside, it feeds right into the mouth of the defense. In passing situations, Paye can kick inside and provided an excellent interior pass rush.

In the second round, Dallas gets its cornerback. Asante Samuel Jr, the son of the pick-six artist, brings some nice versatility. He can play man coverage on the outside, with the athleticism and size to stick with most guys. Time with his father has also paid off, with the young corner showing impressive instincts for the position. Given how desperately this secondary needs reinforcements, a first-round talent like Samuel Jr. is a great addition.

Our focus with these Cowboys draft picks remains on the defensive side. Wilson entered the year as a projected top-20 pick, but his stock has plummeted. He has some strength at the point of attack and he has a variety of moves to disengage from blockers to get into the backfield. While there’s plenty of work that must be done with him, the pedigree and potential make him a nice snag at this spot.

We’re not done adding to this defense. The Cowboys haven’t spent a Day 1 or Day 2 pick on a safety in years. Sure enough, it proved to be one of the team’s biggest weaknesses this past season. Cisco is a natural free safety who excels at playing in deep coverage, taking away vertical shots with great ball skills and instincts. Add him to this secondary and Dallas won’t have nearly as many problems containing the passing game.

Plenty of consideration in this Cowboys mock draft was given to offensive players, but we can’t ignore great value. In Twyman’s case, he is the BPA. A potential first-round pick before he opted out. Twyman could be a rotational interior pass rusher in this 4-3 scheme. Having fresh bodies who can get to the quarterback is something great defensive minds can never have enough of throughout the season.