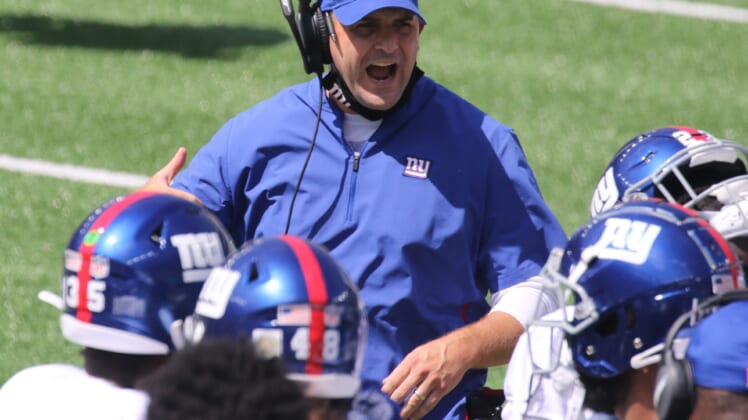 The New York Giants seem to be trending in the right direction, but there’s still plenty of work to be done under new head coach Joe Judge, whose responsibilities may soon be expanding in a big way.

Although the team has rallied well from an 0-5 start to begin Judge’s tenure, it’s been reported that he may position himself for a power struggle with Giants general manager Dave Gettleman. Based on the recent results Judge has been getting, he figures to have the leverage in that battle.

According to NFL insider Tony Pauline of Pro Football Network, the latest buzz out of New York is that “the needle seems to be moving towards letting Gettleman go,” and Judge is going to have a big say in who his replacement is.

“Keep an eye on Nick Caserio of the New England Patriots,” Pauline said, citing two sources with knowledge of the situation. “His name is always brought up when there’s talk about general manager openings, but somehow, the Patriots seem to reel him back in.”

Caserio is New England’s director of player personnel and has held that front office position since 2008. Before then, he held a variety of roles within the organization, including service as the Pats’ wide receivers coach during the 2007 campaign.

It’s unique to have an executive with coaching experience, which may be part of the attraction New York has to Caserio. More saliently, though, Judge comes from the Patriots organization, so he has a tight relationship with Caserio. The fact that Pauline zeroes in on Caserio in particular is telling.

Pauline compared the situation to what’s happened with the Carolina Panthers, who just fired GM Marty Hurney and will give young head coach Matt Rhule more say over personnel and who Hurney’s successor will be.

In an apparent challenge to Gettleman’s autonomy on roster decisions, an ESPN.com report by Dan Graziano and Jeremy Fowler suggests Judge could either wield his own influence on personnel matters, or bring in a new executive who aligns more directly with him.

“There’s a belief in some league circles that Joe Judge…could have more say over personnel matters in the future,” the article states. “What that means for current GM Dave Gettleman is still unclear. But Judge might want to pair with his own personnel man to strengthen his vision for the team.”

Gettleman had an atrocious draft record with the Panthers, and has made his fair share of polarizing moves at least in the first round since taking his post in New York in 2018. Much of his success hinges on how well quarterback Daniel Jones ultimately pans out. Jones has shown flashes of high-end talent and has proven surprisingly dynamic as a ball-carrier, yet his penchant for turnovers is a red flag for the years to come.

Beyond Jones’ uncertain future and how that reflects on Gettleman, the GM has made other acquisitions near the top of the draft that drew heavy criticism. He began by selecting Saquon Barkley second overall, despite the fact that running back is the most replaceable position in modern football. Then, following the Jones pick, Gettleman chose Georgia left tackle Andrew Thomas, who’s ranked 67th out of 83 qualifying offensive tackles in Pro Football Focus’ 2020 player grades.

Barkley was injured last season and has missed most of this year with a knee injury. If he can’t return to be one of the top three running backs in the NFL, that makes Gettleman’s outlook even more ominous.

Despite all those marks against Gettleman, he’s evidently given Judge enough to work with in order to catalyze a turnaround following a disastrous start to the year. First-round picks can really be hit or miss, and based on the sheer Law of Averages, it seems unlikely Gettleman can, in essence, whiff on four consecutive No. 1 picks.

Plus, let’s not forget it was Gettleman who helped hire Judge in the first place. That would be a heck of a bold move for Judge to use his momentum as a means of ousting the man who employed him in such a high post when few knew who Judge was coming out of New England as a special teams coordinator. It was definitely the riskiest hire among last season’s head coaching vacancies, yet Judge is starting to really change the culture in New York.

Wielding too much power too soon can be detrimental, especially if Judge is trying to recreate magic that seems exclusive to the legendary Bill Belichick and the Patriots.

For a case study in how these efforts can prove futile, look at the Detroit Lions, who tried to bring in an all-New England united front with coach Matt Patricia and general manager Bob Quinn. They failed spectacularly trying to build a winner in Detroit, and didn’t even last a full three seasons, with both getting fired. Patricia managed only a 13-29-1 record, with his alleged wizardry on defense being called into serious doubt.

Judge is still in his late 30s, and based on how well he’s turning around the team in 2020, it might be best to just stay pat, and not force Gettleman out of town. On the other hand, if he feels the G-Men are only a few pieces away, and thinks Gettleman is too philosophically distant from him to acquire the talent necessary, we could well see a big front office change for the Giants in 2021.