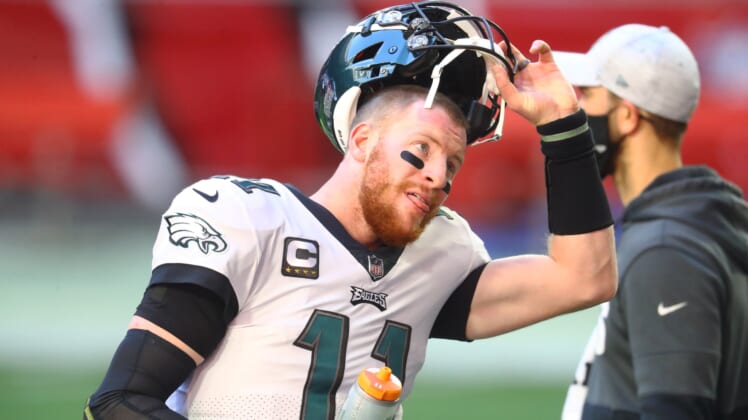 The Indianapolis Colts did what many suspected they would in trading for Philadelphia Eagles quarterback Carson Wentz on Thursday.

Wentz fetched a third-round pick in the 2021 NFL Draft and a conditional 2022 second-rounder that could turn into a first-round selection.

For further context, ESPN’s Field Yates broke down the financial details, while NFL Network’s Mike Garafolo got more specific about the conditions of the 2022 draft pick that Wentz is likely to meet:

After Philip Rivers retired, it was inevitable that the Colts would be in the market for a new signal-caller. It was only a matter of time before the prior ties between Reich and Wentz resulted in Indianapolis general manager Chris Ballard taking the plunge on a trade.

The Colts had reportedly offered two second-round picks in exchange for Wentz previously, but it seemed as though Philadelphia refused to waver on the possibility of acquiring a future first-round pick.

It’s clear the conditions that have to be met in order for the trade’s second-round pick to turn into a first-rounder are pretty easy. Presumably, Wentz will reach the snap count, even if he doesn’t guide the Colts to the playoffs.

Indianapolis has the team in place to make a strong run through the postseason. The question is whether Wentz can overcome a disastrous 2020 campaign and thrive with a change of scenery.

As is customary whenever massive NFL news like this breaks, plenty of media personalities had their takes once the Wentz trade became public knowledge.