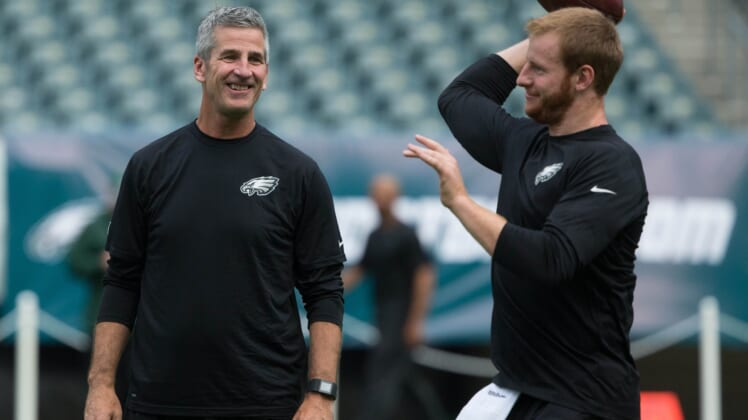 The Philadelphia Eagles are trying to squeeze every bit of value they can out of a prospective trade for quarterback Carson Wentz, and the Indianapolis Colts are reportedly willing to pay a considerable cost.

According to the latest rumors, Indianapolis served up two second-round picks to Philadelphia in exchange for the embattled signal-caller.

Former Eagles quarterback Ron Jaworski, who was a longtime NFL insider at ESPN, provided the latest update on the Wentz trade negotiations between Indy and Philly:

Jaws is probably as plugged in as anyone could be to the Eagles organization, which is in absolute turmoil after firing a Super Bowl-winning head coach in Doug Pederson, and replacing him with Nick Sirianni, whose opening press conference was nothing short of catastrophic from an oratory standpoint.

Sirianni did come over from the Colts, where former Philadelphia offensive coordinator Frank Reich is now the head coach. Reich helped Wentz play like a league MVP in 2017 before the QB went down with a major knee injury.

There are a lot of links tying these two teams together, and because Indianapolis has the cap room to absorb Wentz’s contract and a need under center after Philip Rivers’ retirement, it’d make sense for the teams to eventually work something out.

All that said, is it really the right move for the Colts to try to revive Wentz’s career following a disastrous 2020 campaign? He got benched for a rookie in Jalen Hurts who needed more time to prepare for the NFL game, and managed a horrendous 72.8 passer rating with 16 touchdowns, 15 interceptions and only a 57.4% completion rate.

In addition to being an apparently toxic teammate who refused coaching from Pederson, Wentz’s on-field production doesn’t exactly merit a blockbuster trade. Or so it would seem.

If Reich really felt a certain type of way about Wentz, he would’ve implored Colts general manager Chris Ballard to just get a deal done with already.

While there is merit to continuing negotiations, since Philadelphia and Wentz are determined to file for divorce and the Eagles need all the help they can get to build through the draft with impact players on cheap contracts, if Wentz is the guy, Indianapolis shouldn’t bat an eye at sending a first-round pick over as part of the deal.

Still, two second-round picks may be the best offer the Eagles get. Another option is that they just don’t have Wentz report to the team, hang on until June 1 to trade him, and then see his 2021 dead cap hit from $33.8 million to only about $9.2 million, per Over the Cap.

Given how far back in the draft QB-needy teams such as Indianapolis (21st overall pick) and Chicago (20th) are, there’s a real chance both will miss out on the top prospects since they lack the assets to move up far enough.

Alabama signal-caller Mac Jones seems better-suited to succeed with the Colts than the Bears. Jones isn’t the best athlete, but neither was Philip Rivers, and he has an excellent line in front of him, a solid rushing attack, and would just have to manage the game, as opposed to being a franchise-changing force in the Windy City.

The Colts shouldn’t press for Wentz if they can help it. Other alternatives are available to them because of their luxurious cap space and appealing destination as a team ready to make the playoffs — and with the right QB, possibly contend for a Super Bowl.

Don’t rule out Chicago as a landing spot for Wentz. If the Eagles continue holding out for a trade through the draft — despite buzz that a Wentz trade is rather imminent — there’s a real chance Philly could send Wentz to the Bears, where he’d reunite with former Eagles quarterbacks coach John DeFilippo, who now serves the same capacity for Chicago and is also the team’s passing game coordinator.