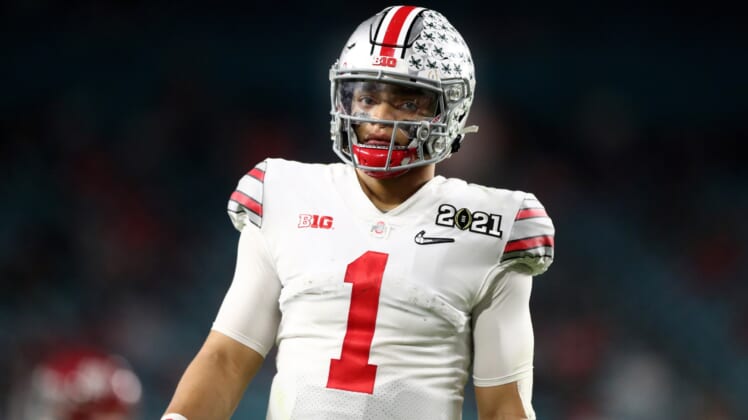 The Philadelphia Eagles are widely expected to trade disgruntled quarterback Carson Wentz, but could they take his replacement with the sixth overall pick in the 2021 NFL Draft?

Well, according to the latest NFL rumors, it is a distinct possibility.

Les Bowen of The Philadelphia Inquirer reported Wednesday that once Wentz is out of the picture, the Eagles could well shift their focus to finding another signal-caller near the top of the 2021 draft:

Obviously, this is potentially big news, considering Philadelphia already has a young field general on the roster in 2020 second-round pick Jalen Hurts.

It doesn’t make a lot of sense to give up on Hurts so soon, especially after he fared rather well under adverse circumstances last season, yet there is some merit to the notion.

Think about it from Hurts’ perspective, though: The Eagles had a lame-duck head coach in Doug Pederson, a banged-up skill position group and a patchwork offensive line. Franchise quarterbacks like Wentz should be able to overcome such things to play at a decent level, but Wentz was so bad that it thrust Hurts into the starting lineup as a rookie, when that was never the expectation.

All this begs the question: With a new coach in Nick Sirianni, a small sample size on Hurts and a dire salary cap situation, is Philadelphia really ready to turn the page at the most important position on the field?

If anyone can handle a little quarterback controversy, it’s Hurts. He once saw future Miami Dolphins starting signal-caller Tua Tagovailoa take his job in the middle of a national title game. From there, Hurts came in the next season in relief duty showing massive improvement as a passer, but Tagovailoa was still the man in Tuscaloosa.

That led Hurts to transfer to Oklahoma, where he picked up Lincoln Riley’s offense on the fly and led the Sooners to a College Football Playoff berth and a 12-2 record while accounting for 52 total touchdowns (32 passing, 20 rushing) and 5,149 yards of total offense through the air and on the ground.

Hurts was unfazed with the whole Wentz fiasco this past season and did what he could when he got in there. What Philadelphia needs to figure out is whether Hurts showed enough to justify committing to him for at least 2021, or if another top prospect presents such an undeniable upgrade in the near term and long haul that he’s relegated back to backup duty.

Counting out Hurts is unwise given his track record. If he were to take starter’s reps throughout training camp, enjoy an upgraded supporting cast and a healthy offensive line, perhaps he could become the next dual-threat stud at quarterback in the NFL.

On the other hand, Pro Football Focus did grade Hurts 37th out of 38 qualifying quarterbacks during the 2020 campaign, so even with underwhelming talent surrounding him, it seems Hurts didn’t make the right reads, decisions or accurate throws often enough to suggest he can be a franchise player.

Bowen wound up making additional, compelling arguments for and against retaining Hurts as the starter going forward:

As for who the Eagles could acquire to supplant Hurts atop the depth chart, their options are likely to be BYU’s Zach Wilson, Ohio State’s Justin Fields or North Dakota State’s Trey Lance. All of them have superior arm talent to Hurts, which is after all the primary job description for what a QB needs to do.

With Wilson’s ability to throw off-platform, Fields’ experience in big games and the immense upside and superior size Lance presents as opposed to Hurts, Philadelphia couldn’t really go wrong. What the Eagles must figure out is whether they can trade up far enough to get the guy they want most, because in all likelihood, at least Wilson and maybe Fields will be off the board if Philly stays put at the sixth overall pick.

In what already figures to be quite a wild QB carousel this NFL offseason, if the latest Eagles scuttlebutt is true, they’ve just thrown a whole other wrench into the proceedings.