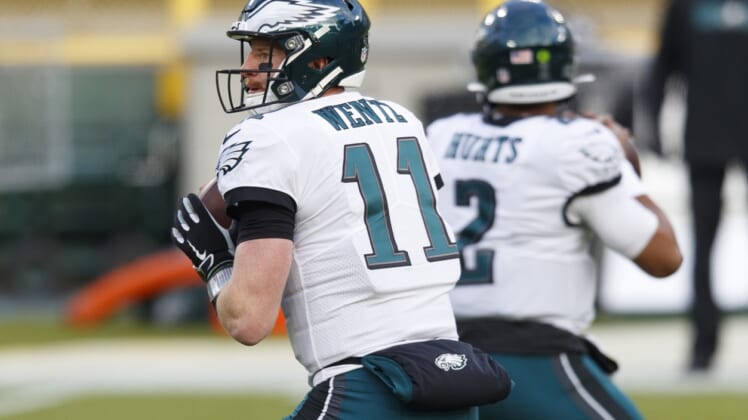 It was noted this past weekend that a Carson Wentz trade from the Philadelphia Eagles could be the next blockbuster around the NFL world during the early stages of the offseason.

Those rumors consisted of the Chicago Bears and Indianapolis Colts being engaged in a tug of war over the recently-benched and high-priced quarterback.

More than anything, it seemed like these rumors were coming from the Eagles’ brass as a way to drum up interest in a Carson Wentz trade and up the ante.

A specific report from Eagles sideline reporter Howard Eskin suggesting that Wentz could be headed to the Bears for Nick Foles, Tarik Cohen and a first-round pick never really made much sense. We now have more information on this, and it’s not great news for the Eagles.

“When trying to trade a player, the leverage for maximizing the return comes from one of two places: Having multiple teams pursuing the trade or persuading one or more teams that the current team will keep the player,” Mike Florio of Pro Football Talk noted on Tuesday. “The Eagles seem to be quickly losing both types of leverage, if they ever had either.”

This makes all the sense in the world. Short of teams engaging in a bidding war for Wentz’s services, there’s very little reason to believe that Philadelphia would even get a first-round pick in return. General manager Howie Roseman is obviously looking to change that narrative, of little or no avail.

Here’s what we do know. Wentz tied with Drew Lock for the league lead in interceptions this past season with 15 despite being benched for the final four games of the regular season. He’s also playing under a bloated four-year, $128 million contract.

Florio had a great point in his report. As we saw with the Matthew Stafford trade from the Detroit Lions to the Los Angeles Rams for a package including Jared Goff, there’s two specific type of quarterbacks on the trade market.

Wentz, 28, is much closer to Goff than Stafford when it comes to the quarterback hierarchy around the NFL. That’s magnified by his ridiculous contract. The idea of Philadelphia receiving a first-round pick and change for the former No. 2 pick never really made sense.

What will a realistic Carson Wentz trade look like?

Attempting to fade out the noise when it comes to a pending deal, we have to look past reports being leaked from the Eagles’ brass. Sure both the Colts and Bears are going to be looking for quarterbacks this offseason. Indianapolis was in on Stafford ahead of his trade to the Rams. Chicago has been linked to Houston Texans star Deshaun Watson.

In no way does this mean either team is going to make a desperate play for Wentz. This is also important to note given the fact that other quarterback-needy teams in that of the Denver Broncos, New England Patriots, Washington Football Team and San Francisco 49ers have not been linked to the struggling Eagles’ quarterback.

What exactly does this mean? No bidding war is taking place. And when looking at the market in a Carson Wentz trade, a Day 1 pick seems to be unrealistic.

Instead, a best-case scenario for the Eagles here would be a second-round pick in 2021 and a conditional mid-round selection in 2022 based on his performance with an unnamed new team.

Click below for more Philadelphia Eagles news and rumors.