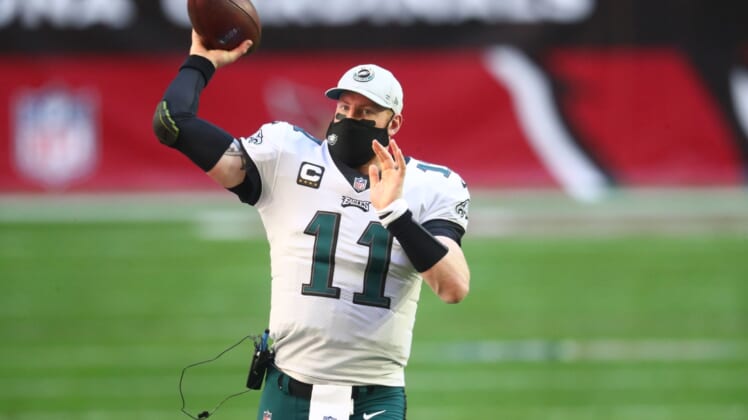 The Philadelphia Eagles are expected to trade quarterback Carson Wentz in the coming days, according to an ESPN report.

The Eagles reportedly are seeking a “Matthew Stafford-like” package in exchange for Wentz.

One week ago, the Detroit Lions traded Stafford to the Los Angeles Rams in exchange for quarterback Jared Goff, the Rams’ first-round picks in 2022 and 2023 and a third-round pick in 2021.

Multiple teams are interested in Wentz, who is 35-32-1 as a starter with 113 touchdown passes and 50 interceptions in his five-year career.

The Indianapolis Colts, who just lost quarterback Philip Rivers to retirement, have been linked to Wentz through head coach Frank Reich.

Reich was Wentz’ offensive coordinator during the 2017 season in which Wentz guided Philadelphia to an 11-2 record while throwing for 33 touchdown passes before sustaining a season-ending injury.

The Chicago Bears are also interested in Wentz, per the report, along with several other teams.

Nothing is on the table yet, but the Eagles are motivated to deal Wentz as soon as a promising trade package presents itself.

The report adds that “the Eagles do not feel rushed to trade Wentz,” and no moves can be made until the official start of the league’s year on March 17.

The Eagles owe Wentz a $10-million roster bonus on Day 3 of the league year if he’s still on their roster.

If Philadelphia pulls the trigger on a deal, Jalen Hurts will likely slide in as the Eagles’ starting quarterback in 2021.

Hurts went 1-3 as a starter this past season, throwing for 1,061 yards, six touchdowns and four interceptions while adding 354 rushing yards and three scores.