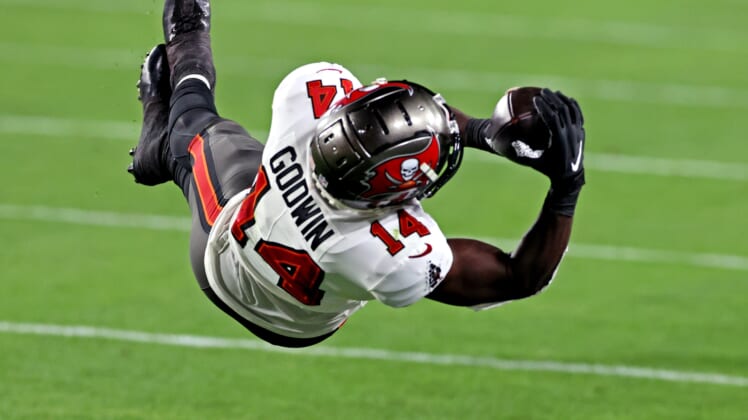 The Tampa Bay Buccaneers are Super Bowl champions and star receiver Chris Godwin played a huge role in making that happen. With the offseason underway, the Buccaneers are already thinking about what it will take to defend their title and believe Godwin will help that effort in 2021.

Godwin is set to hit NFL free agency this offseason, becoming one of the top players available on the open market. While he had a down year statistically this past season, compared to the numbers he posted in 2019, teams seeking a No. 1 receiver will surely be ready to pursue a receiver entering his age-25 season.

But, before that happens, the Buccaneers are seemingly ready to do everything in their power to keep Godwin in Tampa Bay.

NFL Network’s Ian Rapoport reports that the Buccaneers don’t want Godwin going anywhere this offseason and will pursue a long-term extension with him. If talks aren’t successful, the organization is reportedly willing to use the franchise tag on him.

The NFL salary cap will drop in 2021, due to the league losing billions of dollars in revenue because of the COVID-19 pandemic. As a result, the cost of a first-year franchise tag is expected to slip. Based on Over the Cap’s projections, applying the tag to Godwin would guarantee him $16.43 million guaranteed.

It’s a high price to pay, especially for a team with limited cap space. A $16.43 million salary would make Godwin put Godwin 10th among the highest-paid wide receivers in the NFL. He could easily set his asking price at $18-plus million per season if he hit the open market.

A third-round pick in the 2017 NFL Draft, Godwin posted incredible stats in 2019. Working as one of Jameis Winston’s favorite targets, the 6-foot-1 receiver hauled in 86 catches for 1,333 yards and nine touchdowns. He earned his first Pro Bowl selection and staked his claim as one of the league’s best receivers.

Injuries and the additions of Rob Gronkowski and Antonio Brown hurt his numbers this season. He saw 84 targets in 12 games, snagging 65 receptions for 840 yards and seven touchdowns. Godwin made fewer big plays, with his yards per catch slipping from 15.5 to 12.9.

If he left Tampa Bay, there are plenty of landing spots where he could be a No. 1 receiver. The New England Patriots, New York Jets and Baltimore Ravens all have money to spend and are expected to be in the market for an offensive weapon.

Godwin will certainly be Tampa Bay’s top priority among its free agents on offense. But the front office does have several options. It can re-sign Antonio Brown, who wants to return, and allow Tyler Johnson to step in as the No. 3 receiver next season. With that said, losing a player with Godwin’s skills would be a blow for Tom Brady and this passing attack.