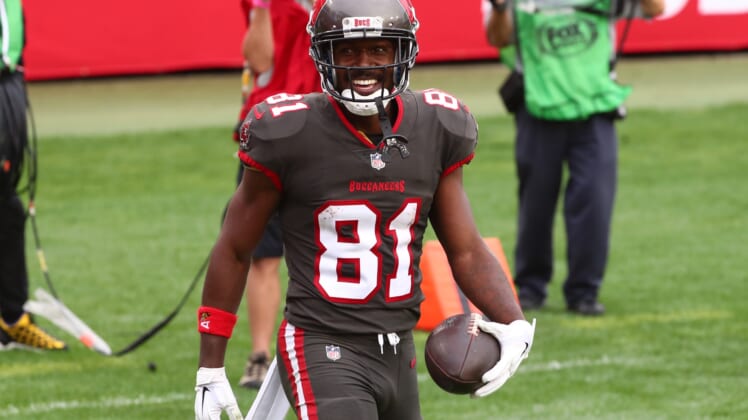 Antonio Brown knew he wanted to play for the Tampa Bay Buccaneers before the team started showing interest in him this season. Things have worked out well for both sides since reuniting Brown with Tom Brady and it seems this partnership could last even longer.

In October, Tampa Bay signed Brown shortly before his eight-game suspension for violations of the NFL’s personal conduct policy. Brady convinced head coach Bruce Arians to take a shot on the former All-Pro receiver and the pairing has worked out nicely.

While Brown won’t play in Sunday’s NFC Championship Game, it seems his time with the Buccaneers won’t be over if the team’s season comes to an end against the Green Bay Packers.

According to NFL Network’s Ian Rapoport, Tampa Bay wants to re-sign Brown this offseason and likes the idea of him being a key piece of their receiving corps for the 2021 NFL season.

Given Brady will return to Tampa Bay next season, it makes sense for the organization to be interested in keeping this duo together for another year.

Brown and Brady were roommates when he first signed with the club, with the future Hall of Fame quarterback taking the troubled receiver under his wing to ensure he avoided additional off-field issues. The extra time training together and developing even better chemistry paid off, with Brown hauling in 45 receptions for 483 receiving yards and four touchdowns in eight games.

Of course, there will be other factors that determine Brown’s future with the Buccaneers. He was involved in more off-field drama weeks before signing with Tampa Bay. He is also still awaiting trial for a sexual assault lawsuit against him, which is set to take place in December.

Brown already signed one team-friendly contract to make things work in Tampa Bay. Given his impressive talents and a relatively quiet few months away from the field, other teams will likely be interested in signing him. If that’s the case, he might have to choose between playing for a close friend or getting paid.