3 teams who should trade for Minnesota Vikings QB Kirk Cousins 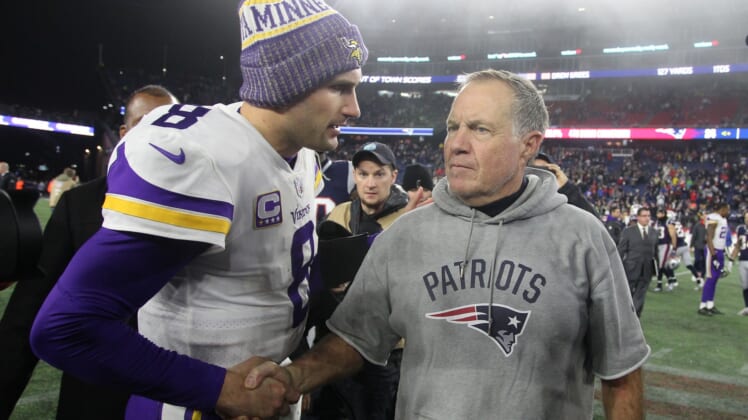 With rumors surrounding nearly every non-franchise quarterback in the NFL, it’s no surprise to see Kirk Cousins included in the mix.

Coach Mike Zimmer’s seat is getting warmer by the year and chances are he cannot afford to miss the playoffs for a second consecutive season. For this reason, it is most likely that the Vikings are not looking to move on from Cousins unless they can ensure his replacement is brought on in the same offseason.

Due to their tight budget, this means waiting for draft day when they are on the clock to ensure the prospect they want is available before officially moving on from Cousins.

Part of the reason the Vikings are so limited with their salary cap space is due to the contract Cousins is currently signed to. At the time of his signing in 2018, it was the highest dollar amount in NFL history. That original three-year contract has technically expired, but Cousins and the Vikings agreed to a two-year, $66 million extension during the 2019 offseason to keep him under contract through 2022.

That extension starts when the 2021 season begins. Earning $21 million in base salary plus the $10 million signing guarantee puts his total cap number at $31 million this upcoming season. In 2022, his base salary jumps to $35 million on top of his $10 million bonus for a cap hit of $45 million.

Meaning that if the Vikings or any other team had the intention of cutting him, they would be on the hook for his full cap number in 2021 plus the $10 million guaranteed to him next season, a total of $41 million. If a team had plans of cutting him in 2022, just $10 million would count against their salary.

For comparison’s sake, the total 2021 cap hit for Cousins falls just below Russell Wilson, right above Ryan Tannehill, and ranks sixth in the NFL.

Obviously, Pro Bowl quarterbacks do not grow on trees. Not only that, but they are not usually commonly available for any team to easily acquire. If there were already an upgrade to be had by trade, it’s likely the Vikings would have already made their move.

Even though Cousins may not be available as of today, things could change quickly on draft day. If the Vikings find themselves in a position to grab a player who they think can be an improvement over Cousins, don’t be shocked if another team acquires the former Michigan State Spartan to be their new starting quarterback in 2021.

It may seem like an odd fit at first glance, but the Broncos could make a lot of sense if the Vikings decide to move on from Kirk Cousins. Not only does Denver’s offensive coordinator Pat Shurmur share alma maters with Cousins, but Shurmur was also coordinating the Vikings offense right up until he received a head coaching gig.

Had Shurmur not taken the Giants coaching job, he very well could have been the play-caller for Cousins in 2017 during his first season in purple. Either way, Shurmur operates a west-coast offense built off a zone running scheme, just like the Vikings do.

The Broncos are loaded with young, talented wide receivers who are set to take off in their respective careers. Jerry Jeudy, Courtland Sutton, and Noah Fant all have Pro Bowl potential and Melvin Gordon can still top 1,000 yards on the ground. With Shurmur, Cousins would be stepping into a similar offensive situation as he currently has with the Vikings.

In the past, John Elway had done everything he could to try and acquire a franchise signal-caller since Peyton Manning retired. Previously the Broncos GM, Elway has since handed the keys over to George Paton, the former assistant GM of the Vikings. Paton was a part of bringing Cousins to the Vikings and he could be preparing to bring him to Mile High.

While Cousins has a bit of a bloated contract, he does still have value as a Pro Bowl quarterback at the top of his game. If Cousins were to hit the open market, his deal would not be much different than it is right now. Cousins would finally solve the Broncos’ passing woes, giving them a quarterback capable of elevating their offense to the desired level.

This is the more obvious fit. The undeniable ties connecting 49ers head coach, Kyle Shanahan to Kirk Cousins dating back to their days in Washington are strong enough. Then, there’s also this nugget shared by John Lynch, stating that Shanahan’s “master plan” was to eventually acquire Cousins.

Of course, this was said back when he was feeling gleeful about his signing of Jimmy Garoppolo due to their sample size of success at the end of the 2017 season. Since then, the 49ers have gone to the Super Bowl in the 2019 season and more recently suffered a host of injuries to set them back. Still, it hasn’t prevented the rumor mill from suggesting the 49ers suddenly don’t feel confident that Jimmy G is their guy.

The Vikings wouldn’t be interested in Jimmy G for anything other than a bridge QB to the future, but his contract is easy to get out of, unlike Cousins. The Vikings could cut Garoppolo in 2021 with just $2.8 million of dead money, or half that amount in 2022.

He could be a nice stopgap for a rookie quarterback to learn from. At worst, he is a capable NFL starting quarterback. Either way, I don’t expect the Vikings to have much interest when he could likely be signed for much less on the open market.

For what it’s worth, Cousins would be a definite upgrade over Garoppolo in San Fran, but would it be enough to propel the 49ers to the Super Bowl? Not likely.

It has been a while, but back in November of 2018, when Bill Belichick and the New England Patriots were preparing to face Kirk Cousins, he was hyping up the quarterback and his history of work.

Any fan of a good Belichick press conference knows this is fairly standard. It’s a classic Belichick move to compliment his upcoming opponent in an attempt to inflate their ego and hopefully let their guard down before the Patriots promptly roll over them, 24-10 or something to that effect.

After all, as a football player, if you can catch the attention of the greatest coach of all-time and have him praise you, that probably feels pretty good, right?

Or better yet, maybe he’d even want you to be a part of his team that consistently aspires to reach the Super Bowl. That’s exactly the thought here, giving the Patriots a quarterback who has plenty of experience being doubted and counted out. While Belichick may have been praising Cousins for competitive reasons, there is no doubt he still respects his abilities.

After reaching the end zone just 12 times by air as a team in 2020, Cousins and his 35 passing touchdowns probably seem like a dream. But the Patriots have plenty of cap space and an obvious need for a quarterback who can help move the chains.