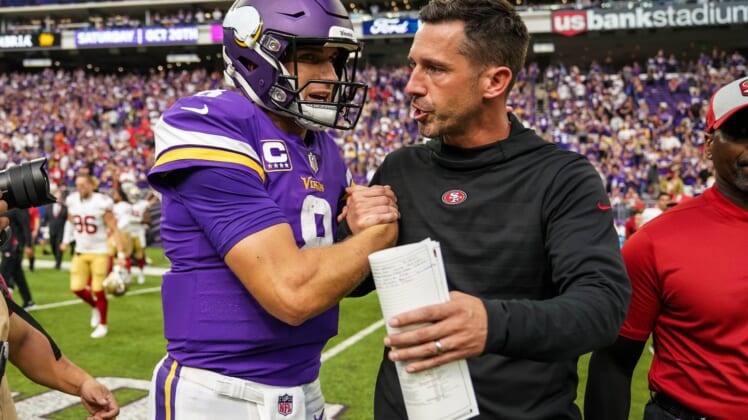 The San Francisco 49ers need quality quarterback play to keep up in the NFC West for the 2021 season, and Minnesota Vikings signal-caller Kirk Cousins is reportedly being considered as an option.

Although a healthy Jimmy Garoppolo could get the job done in theory, Cousins may be replacing him soon enough after the Niners missed out on Matthew Stafford and saw him go to the NFC West rival Los Angeles Rams.

NFL reporter Evan Massey passed along the latest buzz coming out of San Francisco, which suggests the link between Cousins and 49ers head coach Kyle Shanahan is driving the team’s interest in potentially acquiring the two-time Pro Bowler.

Shanahan previously coached Cousins as the offensive coordinator for the Washington Football Team. Despite putting up decent numbers in the nation’s capital, Cousins wound up leaving for the Vikings, and has enjoyed a largely successful three-year starting tenure there.

Is there any merit to the rumors that the 49ers could go after Cousins? It’s a logical match for a multitude of reasons.

It’s not that Garoppolo has been bad since San Francisco acquired him. After all, he guided the Niners to last year’s Super Bowl, which they were leading going into the fourth quarter before Patrick Mahomes and the Kansas City Chiefs staged a comeback for the ages. If not for a slightly overthrown deep ball late in the game, Jimmy G might well be a Super Bowl MVP.

Garoppolo boasts a 22-8 record as a regular-season starter for the 49ers. The problem is, he missed 13 games in 2018 and 10 contests this past season. For all the criticism Cousins fields, he’s missed just one start in six prior seasons.

Being able to execute Shanahan’s complex offense is no easy task. Even as Garoppolo has played winning football in San Francisco, there’s a sense he’s left a lot of yardage on the field.

Some would argue Cousins isn’t that much of an upgrade over Garoppolo, yet the numbers from Pro Football Focus seem to tell a different story:

Despite having different offensive coordinators in every season he’s played in Minnesota, Cousins has put up strong stats each year. As a Viking, he’s completed 69% of his throws, averaged over 4,000 yards passing per season, and has 91 touchdown tosses to just 29 interceptions with a 103.6 passer rating.

Shanahan’s system is largely based on zone-blocking running schemes and play-action passes, which is precisely what Cousins has been operating of late with great results in Minnesota. Plus, his current contract lasts only through 2022, so if he’s a flop this coming season, they can cut Cousins and save $35 million against the salary cap the following year.

As for Garoppolo, he can be released this offseason at only a cost of about $2 million in dead money. Obviously, the 49ers would like to trade him before doing that, yet even if they don’t, there’s a clear path to acquiring a more durable, similarly talented option in Cousins who Shanahan seems to actually want to have on the team.

Remember, there’s the account from 49ers general manager John Lynch, who admitted Shanahan was “in mourning” about the time when San Francisco initially traded for Garoppolo and missed out on Cousins.

That’s pretty intense. It’s safe to say that what Garoppolo has provided in his time with the Niners has been more than serviceable, and Shanahan must have had similar saddened thoughts when he saw Jimmy G hobbling around on the gridiron this season trying to play through another major injury.

But the good thing with Cousins is, he’s as durable a starter as there’s been in the NFL. Between his high-end production and understanding of Shanahan’s scheme, along with a low likely trade cost, it wouldn’t be a total shocker if Cousins wound up trading places with Garoppolo going forward.