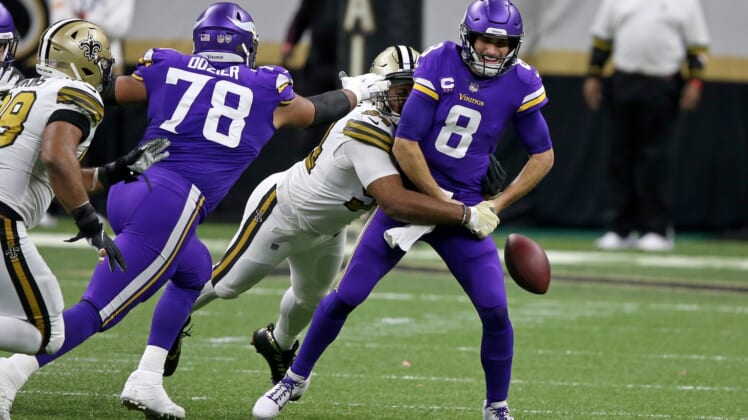 During the 2020 season, several Minnesota Vikings players missed time either due to COVID-19 or injury. Despite their many obstacles, the team still finished 7-9, falling just short of a playoff berth.

Heading into the 2021 NFL Draft, we take a look at why the Vikings should capitalize on their draft position and pull off a Kirk Cousins trade.

Minnesota Vikings have reinforcements on the way

As mentioned above, with many of the top Viking defenders that missed action last season expected to be ready for training camp, now may be the best time to gamble on a high-risk, high-reward move for the future.

Think about it, the Vikings fell just short of a playoff spot without players such as Danielle Hunter, Michael Pierce, Anthony Barr and Eric Kendricks for much of the season. Simply getting all those experienced, talented players back should propel the team further than last year alone.

Add in the continued growth of young players such as Justin Jefferson, a young o-line, D.J. Wonnum, Cam Dantzler, and more, suddenly you have the makings of a playoff roster. At least, on paper. Where Kirk Cousins, Rick Spielman, and the coaching staff take it from there could decide whether they remain in the Twin Cities in 2022. More importantly, a much bigger question remains at large, is the big contract that Cousins is tied to holding the team back from reaching the next level.

Having a backup plan developing along the way is never a bad idea. In the past few seasons, many fans have been clamoring for the Vikings to do something else at the quarterback position. Meanwhile, the contract Cousins is signed to makes it tough for the Vikings to part with him without it seriously harming the salary cap situation.

For example, cutting Cousins this offseason would actually cost the Vikings $10 million more than just keeping him on the roster. If they release him on or after June 1st, Cousins and his full $31 million salary count against the cap, better than losing $10 million, but still not a reason to walk away. It would also cost an extra $10 million against the cap in 2022.

If the Vikings are deadset on dumping Cousins, a trade is their best option. Doing so would cost them $20 million but also free up $11 million to spend elsewhere. However, if they were to wait until after the draft, again on or after June 1st, if a Cousins trade happened, the Vikings could save a total of $21 million.

Of course, the likelier outcome is that Cousins restructures and/or extends his contract, saving the Vikings some money this year and costing them more in a later year.

Basically, Cousins and his agent, Mike McCartney, have the Vikings right where they want them — locked into a contract that is hard to get out of without setting the team back.

On the other hand, the Minnesota Vikings are lucky to have Cousins. Without him, their fourth-ranked offense would likely take a big step back. Other than attempting to swing for the fences on a big trade, Cousins is about the best they can do for now.

Not to mention, if they felt a big trade was easy to do, it would have already happened. The reality is, signing or trading for a game-changing quarterback will be difficult given the current outlook of the salary cap situation in Minnesota.

For the Vikings to truly move on from Cousins, the best way to do it is by attempting to draft and develop a player who can perform better than he has. The very same way he earned his chance in this league, developing into a Pro Bowl quarterback after entering the league as a fourth-round pick in the 2012 NFL Draft.

Luckily, if the Vikings have any thoughts of looking to a future without Cousins, there are plenty of draftable quarterback prospects in the upcoming NFL draft.

While 2020 featured four quarterbacks taken in the first round, ESPN draft analysts Mel Kiper Jr. and Todd McShay suggest this year could feature as many as six selected on the first day. It’s a little early to make those claims with any conviction, but we can identify who those candidates may be.

For purposes of being realistic, we’ll assume the Jacksonville Jaguars take Trevor Lawrence No. 1 overall, which would put him out of the Vikings’ reach, or any other team for that matter. But any of the other top prospects could wind up being upgrades over Cousins in either the near term or the long run — and are certainly cheaper options.

Wilson began separating himself as QB2 in this class by showing off uncommon arm talent amid a phenomenal 2020 campaign. However, the lack of elite opponents and the ample time he had to throw behind BYU’s offensive line allowed him to extend plays and pick apart defenses with tremendous ease.

Credit the BYU star for making the plays he was given and creating so much offense out of structure, but things are going to only speed up exponentially at the NFL level. If he’s ready for the increased intensity of the pro game, Wilson has the tools to be one of the best signal-callers in the game in short order.

General manager Rick Spielman’s brother, Chris, was an All-American linebacker as a Buckeye. One of Rick’s sons earned a lacrosse scholarship there as well. As you can see, the Spielmans have many ties to Ohio State.

Spielman has likely done his due diligence, using any connections he may have to gather intel about Fields. The same goes for his brother Chris, who currently works as a special assistant with the Detroit Lions.

Strangely enough, Spielman has only ever drafted two players who entered the league from Ohio State University. Jalyn Holmes, a 2018 fourth-round pick, and Pat Elflein, a 2017 third-round pick.

Born and raised in Minnesota, the Vikings don’t have to travel far to find out more about Trey Lance. There’s a good chance he grew up rooting for his hometown team, but that’s purely speculative.

Having started just 17 games in college, Lance may need more time to develop before he can step in as a team’s starter. For the Vikings, this could play out nicely.

In 2017, the Kansas City Chiefs already had their starting QB in Alex Smith. That didn’t prevent them from trading up from 27 along with the 91st pick and their next year’s first-round choice to No. 10 to draft Patrick Mahomes. He sat out until the Chiefs clinched a playoff berth, allowing Mahomes to start one game. The following year, Smith was traded in the offseason.

Smith made three Pro Bowls in his five years in Kansas City and was traded after his Age-33 season for a third-round pick, plus a starting cornerback. Next year, Cousins will be 33, he has made the Pro Bowl once and has a bloated contract, which Smith did not have.

Taking a player who may have no issues at all sitting and learning for a year while he develops could work out perfectly for a team that is seemingly stuck in the middle of the road. Lance may fully embrace having the chance to play for what may be the team he grew up rooting for.

After Tua Tagovailoa suffered his hip injury at Alabama, Mac Jones took the reigns for the Crimson Tide. Jones became a viable NFL prospect in his 17 starts, but he is a tier below the four quarterbacks projected to be selected before him. Limited to the pocket, “The Joker,” is an accurate thrower that relies on his touch on the ball and timing with his receivers.

A lack of a big arm to go with limited playing time as a starter leads to questions about his talents translating to the next level. While he played against top competition in college, Jones also had the luxury of playing with the Heisman-winning DeVonta Smith and several other top NFL draft prospects. It makes one wonder whether Mac Jones elevated the Crimson Tide to new heights, or whether Alabama made him look better than he is.

Kyle Trask is a bit of an interesting case. Not unlike Cousins, he is a bright football player, but Trask sometimes makes questionable throws, locking into receivers forcing a bad decision. He also has decent zip on his ball with above-average arm strength, but no one would say he has a cannon arm by any means.

A lack of mobility and a tendency to float balls that should be thrown with mustard could be the ultimate downfall of Trask in the pros, but his intangibles could lead to him becoming a starter with some development.

As mentioned, there are several quarterbacks who could potentially develop into a team’s starter within a year or two in the first few rounds of the 2021 NFL Draft. Is this the year Rick Spielman pulls the trigger on an eventual replacement for Kirk Cousins? If the Vikings are having thoughts of moving on from their Pro Bowl QB, this upcoming draft could be one of their best chances to do just that.