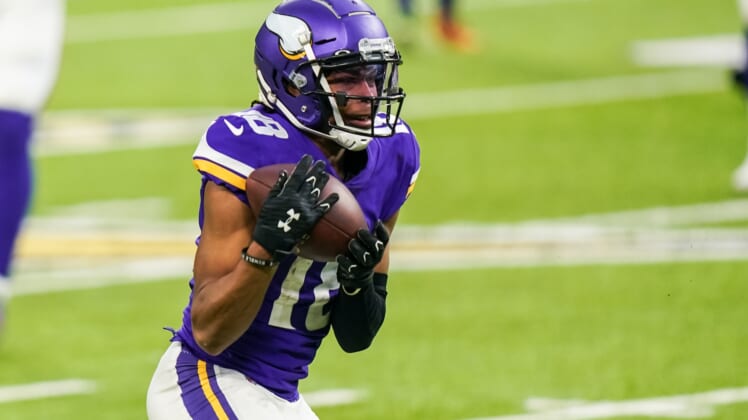 The Minnesota Vikings hit a home run with wide receiver Justin Jefferson in the first round of last year’s draft, and in 2021, they’re hoping to make their Day 1 pick count in similar fashion.

Jefferson wound up breaking the NFL rookie receiving record with 1,379 yards. He was the fifth receiver selected at No. 22 overall, which goes to show the top-notch job Vikings general manager Rick Spielman and his staff does at evaluating talent.

Armed with the 14th overall pick in the 2021 NFL Draft, Minnesota must make its prized asset count, since it doesn’t have a second-rounder. But with three fourth-round choices and a couple third-round selections before then — not to mention the run of quarterbacks that could give them leverage at No. 14 overall — the Vikings are in a pivotal spot in this year’s draft order.

Let’s take a look at some of the prospects Minnesota should target in the first two days of the draft with its current picks.

Both sides of the ball need to improve in the trenches for the Vikings, so that’s where their primary focus should be with their first-round pick. We’ll start on offense, as the interior of the o-line was a particular problem spot, contributing in large part to the unit’s overall Pro Football Focus ranking of 26th.

Slater started at left tackle for Northwestern and is among the savviest blockers in this class. He understands leverage in terms of pad level and also sealing off defenders to create running lanes in the ground game and to create a clean pocket for his quarterback when it’s time to pass protect.

The question is, will Slater still be on the board, or will someone like the Los Angeles Chargers take him instead? That’s when Vera-Tucker would come into play. The USC product played left guard in 2019 before filling in at left tackle and playing at an extremely high level this past season.

Head coach Mike Zimmer would love to mold a pass-rusher like Rousseau, though, who had 19.5 tackles for loss and 15.5 sacks in a monster 2019 campaign before opting out last year. Rousseau has game-changer potential, especially if he lines up opposite Danielle Hunter in 2021 and beyond.

It wouldn’t be a shock to see Minnesota address the edge-rusher spot or the guard positions with both of its earliest draft selections. Brown is a 364-pound mauler who would be a phenomenal force in the rushing attack.

Opposing defenses should shudder to think what the Vikings could do offensively with superior blocking, an elite back in Dalvin Cook, an electric receiver duo of Jefferson and Adam Thielen and an above-average quarterback in Kirk Cousins orchestrating it all. How much better Minnesota gets up front likely depends on landing someone of Brown’s caliber in the third or fourth rounds of the draft.

If you’re a big fan of college production, Rashed’s numbers are mind-boggling. Although the Oregon State standout struggled a bit in 2020, his previous two years were phenomenal, highlighted by a 2019 campaign in which Rashed logged 22.5 TFL and 14 sacks. Maybe he’s a diamond in the rough Minnesota is fortunate enough to unearth at this stage of the draft.

The safety spot is something to keep an eye on for the Vikings, though. They’re going to see Anthony Harris hit free agency and are lacking in cap space, and they can’t exactly afford to franchise tag him again. Because of the tight funds, veteran Harrison Smith is a potential cut candidate, since he’d cost nothing in dead money.

One or both of those players will likely find their way back to Minnesota, but for insurance’s sake, the team could do worse than finding someone like Grant on Day 3. He had 258 total tackles, 10 interceptions, 16 passes defensed and five forced fumbles in his last three years for the Knights.

Another exciting safety prospect is Syracuse’s Cisco. Because the Vikings have more pressing priorities at other spots, it’s more likely they’ll wait on a safety to fall to them at No. 92. While Grant could still be floating around waiting to be picked up by some lucky team, Cisco is a compelling alternative.

Cisco had 12 interceptions in his first two seasons with the Orange, being thrust into action as a freshman. He appeared in only two games this past season, so he’s flying under the radar enough to still be well within reach for Minnesota in Round 3. His skill set as a single-high free safety is uncommon to find this deep in the draft.

Pass-rushing is something no NFL team can ever have enough of, and Twyman fits the bill as an interior rusher who would complement Hunter well on the edge. If Rousseau and Rashed aren’t tenable in the Vikings’ first couple picks, Twyman would get the job done just fine. He opted out of 2020 but had 10.5 sacks and even 12.5 TFL the year before.

Another need that isn’t obvious: Tight end. Kyle Rudolph is another seasoned pro who Minnesota could show the door due to his price tag. Other than Irv Smith Jr., there’s an argument to be made the Vikings need depth. Getting someone who can catch and block like Long would free up Smith to emerge as an even more dynamic pass-catcher and create more max protection opportunities off play-action for Cousins.

Wow! Look at all the trades! Now, for context, in the simulation through The Draft Network, the Baltimore Ravens offered Minnesota the 27th pick, the 59th pick and a 2022 sixth-rounder for No. 14.

Then, using that selection from Baltimore, we got an offer from Arizona to move from No. 59 to 48th in the second round, and kicked in the 157th pick (fifth round) to the Cardinals as part of the trade. That still leaves the Vikings with all three of their fourth-round picks, some of which could even be used to land an established veteran player or be featured in another trade.

So, the mock still yielded Brown and Cisco in the third round, but Iowa’s Nixon came courtesy of the second-rounder from Arizona, while Minnesota took the Ravens’ spot in Round 1 to nab Oklahoma State’s Jenkins.

This way, both the offensive and defensive lines are addressed by first-year players who are ready to make a splash right away. Nixon appears to be a far superior prospect to Twyman, and Jenkins has experience at both tackle positions in addition to right guard, so the Vikings could move him around wherever they need.

The quarterback carousel is bound to go crazy this NFL offseason, and with QB-needy teams like New England (15th), Washington (19th) and Chicago (20th) right behind Minnesota in the first round order, it’s very realistic to expect trades. Even if there’s a run on signal-callers early, other contenders will be chomping at the bit to deal up for high-value players they love.

It’s really a unique position for the Vikings to be in, and they can leverage their first-round status to gain more young players, help their cap situation and still put together a playoff contender for 2021.