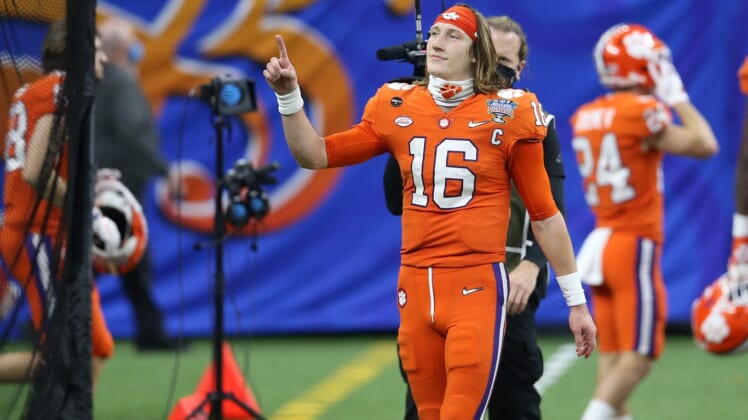 There’s pretty much nothing stopping former Clemson star Trevor Lawrence from being the top pick in the 2021 NFL Draft. After one of the most-dominating college careers in recent history, Lawrence is expected to land with Urban Meyer and the Jacksonville Jaguars when April comes calling.

It was noted earlier this offseason that Lawrence would have to undergo surgery on his non-throwing shoulder. While minor in the grand scheme of things, it is expected to sideline him for a few months.

The good news? Everything seems to be good on this front.

The surgery was to repair a torn labrum on his non-throwing shoulder. It also took place just a few days after Trevor Lawrence threw during a personal pro day rather than waiting until the annual event at Clemson on March 11.

Considered the consensus No. 1 pick in the 2021 NFL Draft, there was nothing for Lawrence to prove to scouts. Despite this, he decided to throw. His likely next head coach, Urban Meyer, was supportive of both Lawrence throwing and not pushing back the surgery.

“I (told) him there are three choices,” Meyer told NFL Network’s Jane Slater. “No. 1, you can wait until the March 11 pro day, but now your (recovery) is getting near August, because it’s a five to six month injury. The second (choice), you can not throw. He’s probably a good enough player, he could’ve said ‘I’m not doing it,’ him and his agent,” “Or the third (choice), I said ‘Why don’t you just go grab a ball and throw for a little bit? … And he said ‘Let’s go.’ That was it. Next thing I know, we’re here at a pro day that they put together (quickly). That’s a guy that loves football and is confident in his ability.”

As Meyer noted, it was important for Lawrence to have the surgery as soon as possible. It’s up to a six-month recovery for a torn labrum. Postponing it could have put the start of training camp and the preseason in jeopardy.

As it stands now, Lawrence likely won’t be taking part in Jaguars offseason activities should they select him first overall. Missing out on training camp under a rookie head coach would have been a less-than-ideal scenario.

Suiting up in training camp will put Lawrence a step ahead of last year’s rookie class of Justin Herbert and Joe Burrow, among others, who didn’t see summer practice action or preseason snaps due to the COVID-19 pandemic. The NFL is expecting everything to go as planned this year.

Lawrence finished up his three-year career at Clemson having accounted for 108 total touchdowns against 17 interceptions. He’s seen as a generational talent leading up to the 2021 NFL Draft in April. This surgery does nothing to change that.