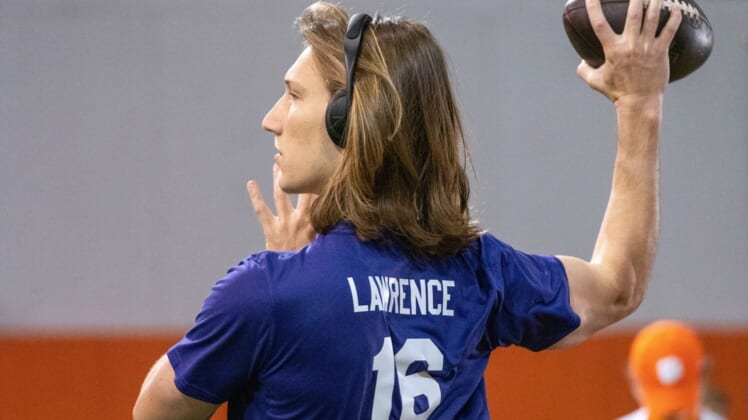 Clemson All-America quarterback Trevor Lawrence had the spotlight to himself on Friday during his pro day, drawing the attention of the media, NFL scouts and the new head coach of the Jacksonville Jaguars.

Lawrence, 21, projected to be the No. 1 overall pick in this year’s NFL draft, had a morning workout for scouts at Clemson’s indoor practice facility.

Among those watching was Jaguars coach Urban Meyer, who stood next to Clemson coach Dabo Swinney for most of the workout. Jacksonville owns the No. 1 pick in the April 29 draft and is expected to choose Lawrence.

Lawrence, who led Clemson to three ACC championships and a national title in 2018, held his pro-day workout a month early. He is scheduled to have surgery next week on a torn labrum on his left (non-throwing) shoulder. Lawrence said he expects to be cleared to practice before NFL training camps open in July.

Lawrence, who measured at 6-foot-5 5/8 and 213 pounds, said he expects to start throwing six to eight weeks after the surgery.

“The original plan was to have two months training out in California, then come back March 11 and put on a show and do all that, but life happens sometimes,” Lawrence said on the ACC Network/ESPN2 following the workout.

Lawrence threw about 50 passes, mostly from under center. He made a variety of throws and ended with a 65-yard pass on a broken play in which he scrambled before launching the ball.

While most eyes were on Lawrence, the quarterback couldn’t help but notice Meyer standing nearby.

“Yeah, yeah. I saw him,” Lawrence said. “I saw a lot of the guys coming through. But yeah, I saw him. Just waved at him real quick. Can’t really communicate out there. But yeah, it’s been real cool to see all the teams come out. It’s definitely a cool thing to experience. I’m glad I got to still do it.”

The Jaguars clinched the No. 1 pick after finishing with the worst record in the NFL at 1-15 under former coach Doug Marrone.