The Jacksonville Jaguars have the No. 1 pick and three draft choices in the top 33 of the 2021 NFL Draft. What will they do after landing Trevor Lawrence? 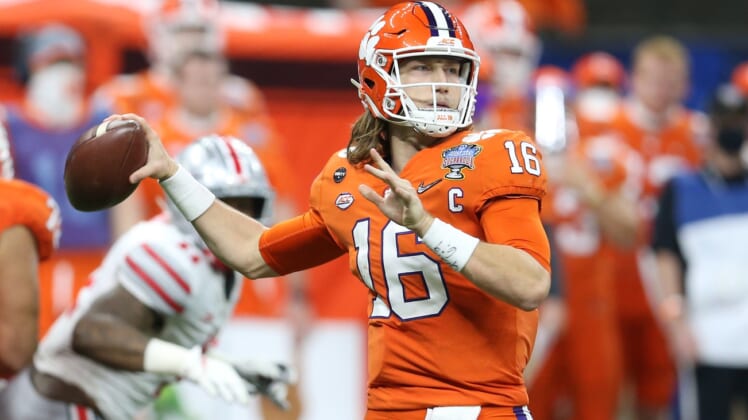 The Jacksonville Jaguars have a new head coach in Urban Meyer, and are reportedly staying in-house to promote Trent Baalke to their full-time general manager post. With key leadership positions settled, Jacksonville fans have the No. 1 overall pick int he 2021 NFL Draft to look forward to.

No doubt a big draw as to why Meyer took the job in the first place, this top pick is going to be used on Clemson quarterback Trevor Lawrence for obvious reasons. The golden-armed, long-locked, cleanest quarterback prospect perhaps in NFL history is the Jags’ big ticket back to NFL relevance, along with Meyer.

But in order for Lawrence to have as much success as possible, and soon, the Jaguars must draft well after him. Let’s take a look at the rest of the selections Jacksonville has, and which college stars they may target to build the roster around their new, dynamic signal-caller. All picks are courtesy of the latest, full draft order from Tankathon.

Very little needs to be said, but OK, we’ll address the obvious: Lawrence is at least the best prospect since Andrew Luck. If not Peyton Manning. If not John Elway. Those latter two men are multi-Super Bowl champions and first-ballot Hall of Famers. Luck was headed that way prior to his sudden retirement.

Lawrence just has such a better feel for the game than most college quarterbacks. Beyond having the required physical tools to play the position at a high level, nothing seems too big for the young man, who’s been dealing with an exceeding all the hype since high school.

A 34-2 starting record at Clemson, three College Football Playoff appearances and a national championship as a true freshman make Lawrence among the best collegiate players ever. Meyer has reportedly been taken by Lawrence’s brilliance, and again, there’s no way he takes the Jaguars job if Lawrence isn’t there waiting.

No need to belabor this point anymore. Congratulations, Jaguars faithful. Lawrence is going to, in all likelihood, prove to be the biggest-impact acquisition in franchise history.

Star Jaguars defensive end Josh Allen is coming off a knee injury, and given the general deficiencies on Jacksonville’s front four, it’d make sense to go with an in-state product like Rousseau. Despite being a one-year wonder, what a 2019 Rousseau had for the Hurricanes, racking up 19.5 tackles for loss and 15.5 sacks, with several of those coming from interior pass rush snaps.

Rousseau’s versatility and raw ability make him a fun piece Jacksonville could sculpt in the coming years into a perennial Pro Bowler. But for the most part, the paramount priority should be upgrading the offensive tackle positions to make sure Lawrence is well-protected. The league-leading cap space the Jaguars have can be spent mostly on defense, while Lawrence and several other young studs on offense grow alongside each other.

Oh, it’s very possible the Jaguars have their cake and eat it too by adding offensive players, who’ll probably want to come play with Lawrence anyway. In this particular scenario, it’s a matter of whether the Jags want to add protection or a premium pass-catcher like LSU’s Marshall, who averaged over 104 yards and caught 10 touchdowns in 2020, proving Joe Burrow and the Tigers’ loaded, national title-winning offense wasn’t the sole reason for his gaudy draft prospect status.

While Marshall would be fun, Lawrence should have enough to work with between rising sophomore Laviska Shenault Jr. and speedy, sizable deep threat DJ Chark. Therefore, we go back to the offensive tackle spot, and here, Jacksonville would choose between a pair of versatile players.

Cosmi had 34 starts, almost evenly split between the left and right tackle spots. He’s used to playing in a spread, faster-tempo system, which Meyer and Lawrence figure to deploy in some form or fashion in 2021. Whichever tackle spot Cosmi goes to, he’d compete right away for a starting job.

As for Leatherwood, he’s played a full season at right guard and two at left tackle. The Jags are pretty much set on the interior, so Leatherwood would need to prove he can get it done at tackle in the NFL, as opposed to sliding back inside to guard. It feels like Cosmi is a little more fluid and would have a clear path to the right tackle starting spot, which is why he gets the edge as Jacksonville’s top target here — provided he’s still on the board.

There’s no question Samuel and Phillips would be assets for the Jaguars as they reconstruct their terrible defense, but giving Lawrence another weapon in the passing game takes precedent here.

Freiermuth had two seasons of solid production and then had 310 yards receiving in only four games this past season. In addition to being a strong hands catcher, Freiermuth boasts a big 6-foot-5, 258-pound frame that makes him well-suited to improve his blocking in the future.

Since Clemson ran more of a spread offense, Lawrence didn’t have to rely on tight ends as much. As he gets acclimated to the NFL, it’d be nice to have a physical, sure-handed security blanket like Freiermuth working up the seam or creating mismatches in underneath coverage against smaller defensive backs or linebackers who don’t have his ball skills.

The other fun possibility here is reuniting Etienne with Lawrence, though it’s a long shot given that undrafted revelation James Robinson clearly proved capable of being a lead back with his breakout 2020 rookie campaign. Nevertheless, don’t dismiss the possibility of Etienne landing with the Jags if the new offensive coordinator likes to run. Having a legit 1-2 tailback punch to complement Lawrence wouldn’t be the worst thing.

This is where it’d make sense to build out some defensive depth, not putting a ton of pressure on younger players to step in right away, but if they did, it’d be welcomed. Such is the case with contributors like Nixon on the interior line and Campbell in the secondary.

Nixon was an absolute beast in the games he played for the Hawkeyes in 2020, racking up 13.5 tackles for loss, 5.5 sacks, and to give you an idea of his athleticism, he took an interception 71 yards to the house. Projections are all over the place for the former Iowa star, but don’t sleep on him as a high-impact rookie if he lands in the right spot and gets enough reps throughout training camp to prove himself.

Remember when the Pittsburgh Steelers nabbed JuJu Smith-Schuster in the second round out of USC and no one really saw his stardom coming? Well, a similar narrative could be in store for St. Brown, who’s not quite as big and physical as JuJu, but plays bigger than his slenderer frame, and is outstanding at tracking the ball on deep throws. Lawrence would have a field day with St. Brown and Chark blowing the top off opposing secondaries.

Eichenberg is more of a pure left tackle who could be gone in Day 1, yet if he’s here and the Jaguars don’t land Cosmi or another edge blocker at the Nos. 25 or 33 slots, the Notre Dame star would be an ideal prospect for Jacksonville to bring aboard.

Finally, there’s Campbell, a lengthy, excellent athlete on the perimeter whose stock isn’t as high as fellow Georgia corner Eric Stokes, but he should still be around if the Jags want to add another premium SEC talent to their cornerback room to pair with 2020 first-rounder C.J. Henderson.

Anywhere the Jaguars can create competition on this roster with strong, young talent is a big positive. Thus, expect Grant to get a look if he’s still around on Day 3, because he has the tools to step in and start at free safety. It’s more likely Jacksonville will address that problem spot in free agency, though.

Carman is a fun possibility here, especially if the Jags haven’t gotten a tackle to this point in the draft. He’s been Lawrence’s left tackle throughout their shared time on the field together at Clemson, so there’s a comfort level there. Whether Carman could come in and start in Week 1 is another matter, because chances are, he couldn’t.

That leaves cornerback as the recurring position of need, and it’s a big one to have multiple players at. Although Mukuamu is appealing with his 6-foot-3 frame and fliers under the radar alongside probably first-round Gamecocks corner Jaycee Horn, the optimal selection here is Wade.

A former 5-star recruit with physical tools for days, Wade has that Buckeye connection to Meyer, something that can’ be underestimated particularly at this juncture of the draft. Wade has all the tools to be a starting corner, and could even move to either nickel or safety if the Jags’ new defensive coordinator calls for it. That versatility and high upside would be too much for Jacksonville to pass on Wade at No. 65 — and he could very well be there.

The good news is, the Jaguars control their own destiny when it comes to Lawrence. He’s a can’t-miss prospect, and as long as Meyer and Baalke don’t do anything crazy, Lawrence will be reporting for duty in Duval County soon enough.

There’s a world in which other positional needs for teams supersede the tight end spot, allowing Freiermuth to drop out of the first round, but into the very top spot of Day 2. Although the cornerback class is a little top heavy, some mock simulations had Samuel still available at No. 45 overall, but most didn’t. Thus, Nixon helps shore up the trenches for Jacksonville’s sieve of a front seven, creating free opportunities for playmaking linebackers Myles Jack and Joe Schobert to fill gaps and stuff the run far better than the Jags did in 2020.

Wade’s sinking draft stock makes him seem like an ideal candidate to play with a chip on his shoulder and capitalize on his immense potential under a demanding, relentless mentor like Meyer, who can push him and will know all he needs to about Wade thanks to his connections back to Ohio State.