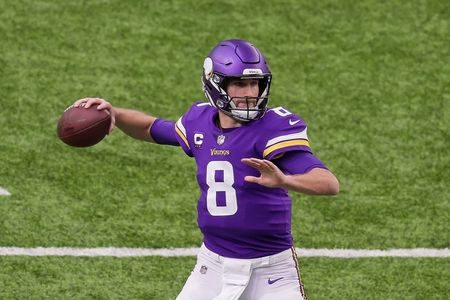 Coming off a strong 2019 effort in which the Minnesota Vikings lost to the NFC champion 49ers in the Divisional Round, understandably many fans in the Twin Cities had hoped for better results in 2020.

With how the season went, finishing at 7-9, it’s easy to say the Vikings were a major disappointment. My dad reminds me of such each time we talk football, it’s great.

Although, if you’ll recall back to before Week 1, there was a high level of uncertainty surrounding how the completely revamped cornerback group would handle being thrown to the fire right away. With no preseason to get their legs underneath them, there were a lot of early struggles.

Add in that Danielle Hunter wasn’t healthy enough to play a single snap and it becomes easier to understand how the team failed to accomplish their goals of getting back to the playoffs.

While as a whole, Vikings fans expected more from their team, there were a lot of bright spots along the way. In an upcoming series of articles, explore how each position group handled the 2020 season, starting with quarterbacks.

It’s impossible not to hear the general criticisms of Kirk Cousins over the years. He holds onto the ball too long, can’t win a big game, and can’t elevate a team. Or that he makes way too much money per year.

While some of these critiques are warranted, Cousins is still an above-average NFL starting quarterback. The Vikings could do a lot worse (and they have).

Before 2012, the Vikings squeezed everything they could from Daunte Culpepper and Brett Favre until their bodies fell apart. Since 2000, beyond those two, the quarterback carousel was truly atrocious.

When Rick Spielman became the full-time general manager in 2012, Minnesota has trotted out characters such as Christian Ponder, Matt Cassel, Sam Bradford, and Case Keenum. There was also Teddy Bridgewater’s gruesome injury of which nobody truly knew how or when he may recover.

There isn’t a person on Earth who thinks any of those players listed above could consistently play better than Cousins and his 25-21-1 win-loss record since becoming a Viking in 2018 has led to. It’s not far-fetched to say that, besides Favre in 2009, Cousins has been the best Vikings starting quarterback since Culpepper.

His $33-million per year contract ranks as the seventh-highest annual earner among quarterbacks in 2020 and 2021. Of course, that’s before superstars such as Dak Prescott or Josh Allen sign long-term extensions, which will surpass anything Cousins brings home.

Cousins led an offense that ranked third in yards per game and sixth in red zone touchdown scoring percentage. It’s the first time the Vikings have had a top-10 offense since Brett Favre was slinging footballs to Sidney Rice and Percy Harvin in 2009 and the best rank they have had since Culpepper played at a near-MVP level in 2004.

Behind Cousins, the Vikings didn’t have any viable options worthy of deserving snaps at quarterback this past season.

Veteran backup Sean Mannion has never shown much in his very limited action in the NFL and at 28 years old, is unlikely to make any sudden strides. While young players such as Jake Browning and 2020 seventh-round pick Nate Stanley could develop their way onto a 53-man roster, for now, they have yet to get above the practice squad.

How do the Minnesota Vikings improve at quarterback?

With Mannion set for free agency once again, there is no obvious reason to keep bringing him back for any other purpose than simply knowing the offense. Even that will be changing with offensive coordinator Gary Kubiak retiring. The Vikings are heading into another offseason with limited cap space, don’t expect a major overhaul to the quarterback room.

That doesn’t mean we can’t still speculate. A big-name free agent like Dak Prescott would be perfect for the Vikings. It’s a pipe dream but bear with me for a brief moment.

Prescott, before his injury, showed incredible mobility, which makes him a great fit in the offensive style Zimmer seemed to like. Pairing him with Dalvin Cook, Adam Thielen and Justin Jefferson would give the Vikings a top-five offense for many years to come. However, with the $41-million cap hit that getting rid of Kirk Cousins would cost, a move such as Dak is simply not feasible.

While there are several high-profile quarterbacks seemingly available via the trade market, in reality, the Vikings already have a starter in place, and he’s actually pretty darn good. With Mannion’s contract expiring, look for Spielman to bring in some competition for young backups Jake Browning and Nate Stanley either through the draft or in free agency.

Should Rick Spielman have acquired a better QB by now?

Maybe you believe that Spielman has failed to evaluate and target a Super Bowl-winning quarterback since earning the final say in 2012. You’re not wrong. The Vikings haven’t won a Super Bowl.

To go even further, examining the available QBs in the recent past, how many chances has he had to acquire a superstar quarterback? Let’s take a look.

Going back to 2012, the Vikings had just drafted Christian Ponder 12th overall in 2011, they were likely not yet identifying quarterback as a position of need heading into the draft. Picking fourth, they selected what they hoped would be a franchise left tackle to protect their young QB and help pave the way for Adrian Peterson for years to come. After one fine year, Matt Kalil quickly turned into a bust.

In 2014, Spielman took a chance on drafting Teddy Bridgewater 32nd overall. Looking back, it wasn’t a bad choice. Who knows how Bridgewater’s career would have gone had he not suffered a major injury in his early development stages?

The then-Oakland Raiders selected Derek Carr four spots after Bridgewater. Carr has been solid during his seven years as a starter but even he has only taken his team to the playoffs once, in 2016.

Before the 2016 season could start, Bridgewater suffered his career-changing leg injury. This immediately prompted Spielman to strike a deal for Sam Bradford. He had a great season, yet it only led to an 8-8 record. The next year, Bradford’s knee gave way and the team’s immediate future was suddenly in the hands of journeyman backup Case Keenum.

Once again, fans thought the season was cooked until Keenum showed surprising pocket awareness, developing a strong bond with the core of Adam Thielen, Stefon Diggs, and Kyle Rudolph. The Vikings went 13-3 and the Minneapolis Miracle happened.

Keenum’s contract was set to expire, the Vikings had an appealing roster and felt it was time to swing for the fences. Whoever the top veteran quarterback available was, they would go for it.

Kirk Cousins was Minnesota Vikings’ best option when he was acquired

As they positioned themselves as the most desirable team for an available quarterback to choose, the Kirk Cousins marriage had begun. The choice for the Vikings was Keenum and his $18-million per year or Kirk’s $28-million. It seemed like a no-brainer.

The 2018 draft presented the chance to take Lamar Jackson before he was plucked 32nd overall. That was a gamble any way you look at it and requires drastic changes to your offense. Not that I’d be against it, but I can understand how Cousins felt like more of a sure thing than taking a 13-3 team and inserting Jackson as your QB from Day 1.

Kyler Murray is the only good QB from the 2019 class and as the No. 1 pick, he was not available.

All of this is to say, Rick Spielman has done a good job of identifying a capable quarterback in his tenure as the Minnesota Vikings’ GM. Cousins is coming off one of the best years statistically of his career and has a great stable of playmakers at his disposal. If the interior offensive line improves, and if the Vikings can find some level of stability with their coordinator situation, look for the offense to remain dominant in 2021.

There are rumors that Kyle Shanahan may be intrigued with the possibility of reuniting with Cousins, having worked together in Washington for two seasons from 2012-2013. Even 49ers GM John Lynch has admitted in the past that Shanahan’s master plan was to eventually acquire Cousins. While the 49ers may very well be interested in improving their QB position this offseason, taking Cousins away from the Vikings is not ideal from Minnesota’s perspective.

This is not a situation akin to the Stafford-Goff trade. Zygi Wilf, Mike Zimmer and Co. are not looking to kick the can down the line, they want to win now. The only way the Vikes move on from Cousins this offseason is if they can assure themselves that whoever replaces him, instantly propels the offense even further.

There are only a few “available” quarterbacks who have the chance to do that, besides gambling on a rookie. Deshaun Watson, Dak Prescott and Aaron Rodgers are the only bonafide QB’s rumored to be on the attainable that can take this team to the next level.

Prescott would cost a boatload. The Packers would never allow Rodgers to be traded to a division-rival (see Brett Favre), that’s if they’re even considering a move in Green Bay.

Watson would likely require unloading two firsts, Cousins, and Justin Jefferson or Danielle Hunter. That’s if Watson would even want to come here, being that he a has a full no-trade-clause. This situation is not the same as when the Vikings were coming off a successful playoff run in 2018.

When compared to the 25 or so other teams likely vying for Watson’s services, as much as I love the Vikings, why would he choose to be a member of the purple at this point in time? Great owners with a solid supporting staff will only get you so far.

Watson has the chance to join an up-and-coming team and take them to the moon. A situation where he can likely move closer to home and still compete for a Super Bowl within a few seasons. It seems like a no-brainer, even for this homer.

What are the odds that Minnesota moves on from Kirk Cousins?

While we will continue hearing rumors all offseason regarding Cousins, it just doesn’t make sense to trade him before the season begins. Not unless his replacement is already lined up. Waiting for a top quarterback to fall at No. 14 overall in the 2021 NFL Draft is risky, not to mention the uncertainty of inconsistent play that usually comes along with rookies.

Of course one can never project the true talents of a rookie until they get out on the field. Minnesota may draft a QB, but it won’t be to start on day one, not if Cousins is in the building. I’d love to see a prospect like Trey Lance, Zach Wilson or any other highly-touted QBs drafted to give Vikings fans a bridge to the future. I’m just not sold it will happen this offseason.

Cousins is coming off one of his best seasons as a pro, drafting what may be his eventual replacement might send an odd message to the locker room. There is no doubt the Vikings need to gain better control of their salary cap situation, but maybe Cousins or other veterans will reduce their annual salaries in an effort to make a push for a Super Bowl once and for all.

I’m not much of a betting man, so take this with a large grain of salt. However, if I were to guess the chances of Kirk Cousins getting traded before the start of the regular season, I’d say the probability is very low.