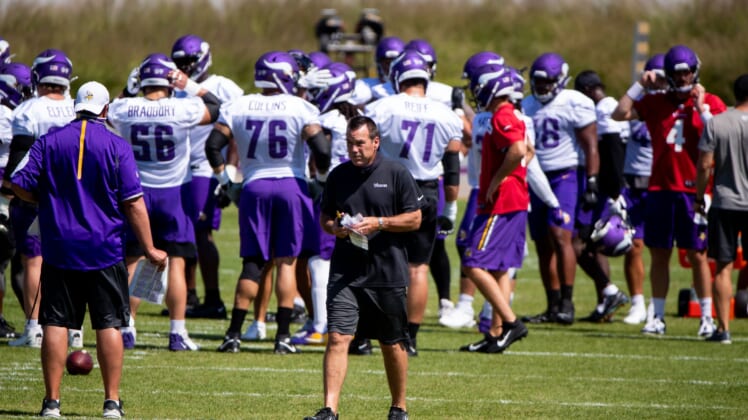 With the news becoming official that Gary Kubiak is retiring again, Mike Zimmer will have to search for his sixth offensive coordinator in as many years.

Naturally, the next question is: Who are some of the candidates to replace Kubiak?

As the son of Gary, Klint Kubiak is already on the staff, coaching the quarterbacks since 2019. The younger Kubiak played safety at Colorado State until 2009 before embarking on a coaching career shortly thereafter.

The move here would likely keep all the same schemes and verbiage in place, so for the sake of familiarity and continuity, Kubiak at least has a puncher’s chance to take the lead job.

Kubiak’s lack of actual play-calling experience is definitely a concern, though. At 33 years old, he has yet to call plays at any level in his eight years as a coach.

In working with Kirk Cousins the two previous seasons, though, he’s already on the same page with the quarterback, which could help them build off of their 2020 success. Neither Cousins nor Zimmer likely wants major changes yet again, so a Kubiak promotion would likely keep everyone happy.

Working alongside Gary Kubiak, Rick Dennison started out on the Vikings staff in 2019 as the offensive line coach/run game coordinator. Dennison has a large coaching resume, including 10 years of NFL experience as an offensive coordinator.

In that time, Dennison’s offense finished top-five in yards twice and in the top 10 three times. However, in his last two seasons as a coordinator, Dennison’s teams were 27th and 29th. He also has two years leading an offense that ranked top-10 in points scored, but also got fired in Houston in 2013 for scoring the second-fewest points in the NFL.

Dennison has the most experience of the group, and although the running game has been superb under his tutelage, the offensive line has not exactly excelled in recent years, ranking 26th out of 32 teams in 2020 according to Pro Football Focus.

While Anthony Lynn has plenty of coaching experience, recently with Justin Herbert and the Los Angeles Chargers, there is a reason he just got fired. The inexcusable game-management mishaps and frequent questionable decisions suggest some further issues.

Maybe Lynn simply isn’t the guy for a head-coaching gig. Would he be any better just focusing on offensive coordinator roles as opposed to managing an entire team?

There’s at least some reason to believe this could be the case. Lynn did bring along Herbert quickly, and didn’t have a great rushing attack in either of his final two seasons in LA. That would change drastically with Dalvin Cook in the backfield for Minnesota.

Oh, and those offensive line rankings just cited in the prior section? The Chargers ranked DFL in PFF’s hierarchy, which goes to show how great Herbert was as a rookie, but also how well Lynn did to keep his team competitive in most contests.

Lynn is a former NFL running back who has only had one prior shot as an offensive coordinator in Buffalo in 2016. With ties to both Bill Parcells and Mike Shanahan, Lynn has the type of connections that should appeal to Zimmer, provided the Vikings head coach desires an offensive identity similar to the one Kubiak fostered.

In 2012, when Zimmer was coordinating the defense of the Bengals, Jackson was hired to coach the secondary. It was a strange move, as that is the only season Jackson has ever coached the defense during his 18 years in the league. They had one more season of overlap in Cincinnati before Zimmer went to Minnesota.

Jackson has nine years of experience either coordinating an offense or being a head coach in the NFL. He has one season in which his offense ranked top-10 and two years in which his team placed among the league’s 10 highest-scoring offenses.

The bad side of Jackson’s history includes going 1-31 with the Browns. In 2016, his offense was 30th in yards and 31st in points. For the 2017 season, they scored fewer points than any other team. However, his lone year in Atlanta was not much greater, as the Falcons finished 29th in points scored amid the disastrous, short-lived Bobby Petrino era.

Whether it’s someone on this list or another play-caller taking over for Kubiak, it’s vital that the Vikings maintain their identity with someone as electrifying as Cook in the backfield. As we saw how long John DeFilippo lasted in Minnesota (13 games), a drastic change with a focus on passing more frequently simply won’t fly.

The reason many of these candidates are internal or have shared history with Zimmer or multiple mutual connections is due to the need for consistency. Cousins isn’t a franchise-changing quarterback who’s built to overcome dysfunction and constant turnover. It’s not easy for any QB to adjust to a myriad of different offensive coordinators, so for his sake alone, Zimmer must stick to his long-held offensive philosophies.

Advocates of the new wave of pass-happy offenses may shudder at the thought of Minnesota not utilizing its dynamic receiving duo of Adam Thielen and Justin Jefferson enough, but that’s not what’s being argued for here. It’s a matter of not abandoning the run, and understanding just how explosive the Vikings’ attack can be when Cook is the centerpiece.

Cook helped lead an offense that finished third in the NFL, gaining 393.2 yards per game in 2020 — and that was after a slow start. Thus, look for the Vikings to try to maintain as much continuity as they can with their approach going into 2021, which may be enough to catalyze a return to the NFL playoffs.