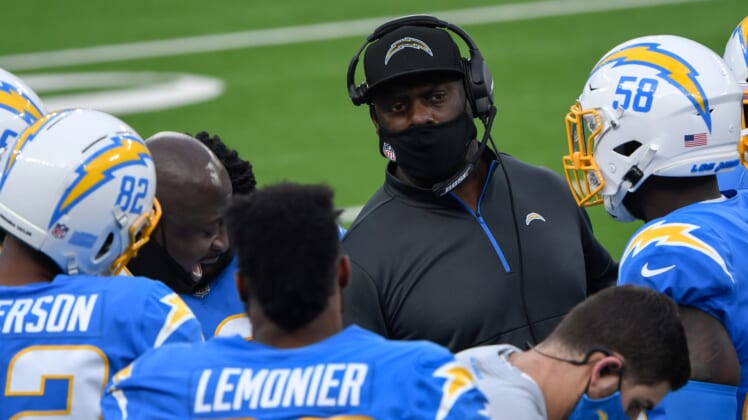 Despite the team closing out its season on a four-game winning streak, finishing with a 7-9 record, Los Angeles will move on from Lynn following multiple years of fourth-quarter collapses.

Los Angeles Chargers: How team can build around Justin Herbert this offseason, contend in 2021

ESPN’s Adam Schefter first reported word of Anthony Lynn’s firing on Monday. In a statement, the Los Angeles Chargers confirmed the news with owner Dean Spanos weighing in on the club’s future.

Los Angeles hired Lynn as its head coach in 2017, taking a chance on him after he served as the Buffalo Bills assistant head coach and running backs coach. Regarded as one of the NFL’s best positional coaches at the time, the Chargers were hopeful Lynn would make things work in the lead role.

Everything looked promising after a 9-7 season, with the team just missing out on the NFL Playoffs. Los Angeles followed that up with a 12-4 record in 2018. They entered as a wild card team, missing out on the AFC West crown to the No. 1 seed Kansas City Chiefs. After beating the Baltimore Ravens in the Wild Card round, Los Angeles was ousted 41-28 by the New England Patriots the following week.

Unfortunately, the next two seasons saw the team crash back to earth. While the Chargers kept a lot of games close in 2019, injuries and awful decision-making in key situations proved costly. Los Angeles finished 5-11 on the year, with a 2-9 record in one-score games.

Herbert still found a way to keep this team alive, delivering one of the greatest rookie seasons in NFL history. Unfortunately, Lynn and his team kept making the same mistakes in the clutch. Repeated clock-management failures and an insistence on running the football resulted in the team dropping seven one-score games this season.

With Lynn’s departure, the Chargers will have one of the most attractive openings in the NFL. Herbert looks like a future NFL MVP candidate and this offense also boasts Keenan Allen, Austin Ekeler and Mike Williams.

Los Angeles will have money to spend this offseason, which can be devoted to upgrading the offensive line. The team will likely target an offensive-minded coach, one with a background in developing quarterbacks and building a scheme around the passing game.

Related: Ranking the best head coach openings in the NFL

As for Lynn, his days as an NFL head coach could be over. With that said, he is beloved around the league by players, coaches and executives. He will likely be flooded with offers this offseason to be a running backs coach or even an offensive coordinator from various teams.