Los Angeles Chargers: How team can build around Justin Herbert this offseason, contend in 2021 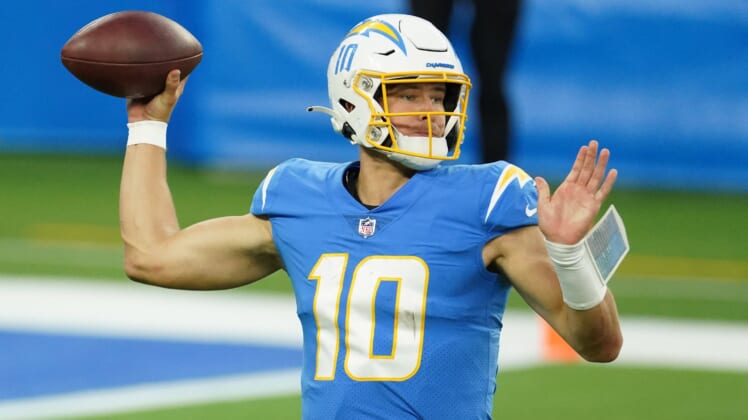 The Los Angeles Chargers found their franchise quarterback in Justin Herbert, with the rookie showing he could be the NFL’s next star signal-caller. If the Chargers want to become contenders in 2021, it will take building around Herbert this offseason.

Finding a franchise-caliber passer is the most difficult thing for NFL teams to do. Los Angeles struck gold with Herbert and there is a strong cast of pass-catching weapons around him. For the Chargers to become a force in the AFC in 2021, however, they must be aggressive and it needs to happen the moment the 2020 season concludes.

There is no time to waste when operating with a great, young quarterback on a rookie contract. The Los Angeles Chargers only have the next four years to really take advantage of this dream scenario. When another disastrous season for this club ends after Week 17, change must come immediately.

Anthony Lynn is a great NFL coach who should find another prominent gig as an assistant the moment he is fired. With that said, the past two seasons have demonstrated his play calling on offense and his overall decision-making in key situations are not worthy of being a head coach.

The Chargers have developed a reputation for routinely blowing late leads and finding new ways to collapse in the fourth quarter. While that falls on the players at first, it’s a reflection on the head coach when it occurs time and time again. After multiple sequences this season, which frustrated fans and led to NFL mockery, it’s time for Lynn to go.

While there are plenty of great defensive-minded coaches available for hire this offseason, Los Angeles needs to pair an offensive guru with Herbert. Great quarterbacks (Aaron Rodgers, Patrick Mahomes, Drew Brees and Tom Brady) all have brilliant schemers and play designs at head coach. That’s exactly what Herbert needs.

The options are all intriguing. Given Bieniemy is the top choice for several teams, there might be a little less competition for Daboll and Brady. The safe bet might be on Daboll, with years of NFL experience as an offensive coordinator, but Brady should be the target.

As a 31-year-old coach in his first NFL season in a prominent position, teams might want to wait another year. Organization seeking safer bets will let Brady prove himself again in 2021, then hope to swoop in during the next hiring cycle.

The Chargers should take a chance on Brady. Another Los Angeles team took a risk on a young, unproven coach and now the Rams have one of the NFL’s best head coaches.

Brady spent two seasons with the New Orleans Saints, serving as an assistant to Payton and learned from him. He joined LSU in 2019 as the program’s passing game coordinator and wide receivers coach. Beyond winning a national championship and the Broyles Award, given to the top assistant in college football, Brady’s scheme led to tremendous growth from players.

Brady hasn’t gotten many chances to use Christian McCaffrey, who has missed a majority of the season with injuries, as a primary weapon in his offense. It’s put the Panthers at a significant disadvantage and Teddy Bridgewater puts a ceiling on an offense, but the Panthers still average 356 total yards and nearly 24 points per game.

Give Brady an offense with Herbert, Ekeler, Allen and Mike Williams. He’ll be able to scheme up a similar attack to what we saw in LSU and this offense could become great. Of course, for that to happen, other moves will need to be made in the offseason.

The COVID-19 pandemic has taken a toll on the NFL, costing the league upwards of $2.7 billion in lost revenue. While owners and the NFL Players Association prepared for this, getting a $175 million floor for the 2021 NFL salary cap, every team will be impacted.

Even with the 2021 NFL salary cap expected to drop next season, sitting around $170-$185 million, Los Angeles is in a nice spot. According to Overt The Cap’s projections, based on a $176 million cap floor, the Chargers will have $25 million in cap room this offseason.

A few additional cuts would create even more cap flexibility:

With these two moves, Los Angeles will have more than $43 million in cap space. In an offseason that could see an unprecedented number of veterans cut, with teams desperate to get under the cap, the Chargers will be in a position to spend.

NFL offseason: Top players who could be cap casualties

These two moves alone would be huge for the offensive line. A team that ranks 27th in PFF“s pass-blocking efficiency and constantly leaves Herbert under duress, could become an above-average offensive line. After that, Herbert would have time to make things happen in Joe Brady’s offense.

With these moves, the Chargers could head into the 2021 NFL Draft with more flexibility.

The 2021 NFL Draft is loaded, offering elite talent at the top of this year’s class and plenty of starting-caliber options on Day 2 and even Day 3. It’s great news for the Los Angeles Chargers, who can fill out their roster to put themselves in a spot to contend next season. With the help of The Draft Network’s mock simulator, we can conduct an ideal mock draft for Los Angeles.

Kicking off our 2021 NFL Draft for the Chargers, we traded back from the 5th overall pick to the No. 9 spot. In exchange, we picked up Philadelphia’s second-round pick and a fifth-round pick. Darrisaw earned high marks from PFF this season for his play, grading as one of the best offensive linemen in the country. Importantly for the Chargers, he allowed five hurries in 170 pass-blocking snaps. He can be at left tackle in Week 1, protecting Herbert.

Rather than sitting back, the New Orleans Saints offered an opportunity to move up. So, the Chargers traded the No. 37 pick and a fifth-round selection to climb six spots. Davis fell this late, creating an incredible opportunity. He can start at guard opposite of Thuney and be counted on for the next decade-plus.

In the second round, Los Angeles grabbed Freiermuth. While Hunter Henry has been solid this season, his play doesn’t justify being paid like a top-five tight end. So, he walks in free agency and is replaced by Freirmuth. At 6-foot-5, Freirmuth is a red-zone threat the moment he steps on the field. He brings soft hands, can separate from linebackers and run through defensive backs. Plus, he is willing to block when necessary.

Roche, once seen as a potential first-round pick, fell to the third round. After recording 39.5 tackles for loss and 26 sacks across three seasons at Temple, the 6-foot-3 edge rusher hasn’t achieved the same success this year with the Miami Hurricanes. That said, he is still explosive for his size and offers the ability to be a starter.

While Tylan Wallace brings a small frame as a 6-foot and 185-pound receiver, he is a good weapon. He can get down the field on vertical routes for big plays, which pairs nicely with Herbert’s arm strength. What makes Wallace remarkable is his ability to win 50/50 balls, despite such a thin frame. He would be the perfect WR3 in this offense.

If this draft could be pulled off, this team could explode in 2021. Brady will have all the weapons he could dream of and a quarterback who can make every single throw, opening things up to attack defenses in a variety of ways each week. Better yet, Justin Herbert will actually have time to throw behind our overhauled offensive line.

Defensively, there’s just not as much to worry about. This team gets back Derwin James, Chris Harris Jr. and Casey Hayward in 2021 after all missed time this season with injuries. Pair that with Joey Bosa and the rest of this front seven, you’ve got the makings of a top-10 defense.

This is how Justin Herbert and the Los Angeles Chargers become AFC contenders in 2021. If they can pull something like this off in the offseason, this is a sleeping giant.