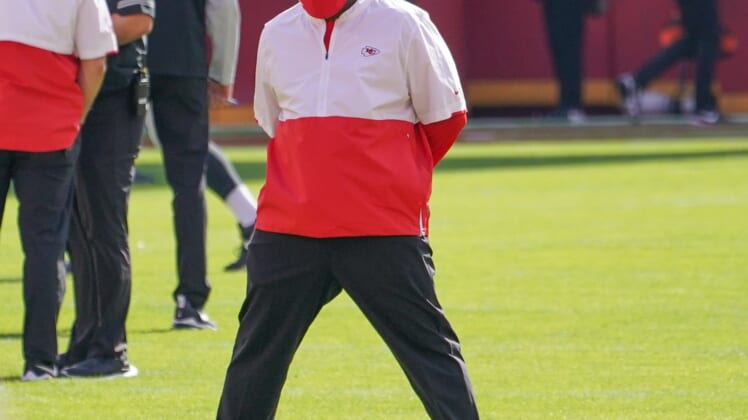 Houston Texans news: The Houston Texans made the first big change of the NFL season, firing head coach and general manager Bill O’Brien. While the team’s head coaching search won’t officially begin until the offseason, one candidate already seems to be emerging.

There will be plenty of teams competing for top coaching candidates this spring. The Atlanta Falcons and Detroit Lions have already fired their head coaches. Meanwhile, plenty of other coaches are squarely on the hot seat in December.

While there will be a lot of competition for Houston, the presence of quarterback Deshaun Watson could already be playing a factor in the search for a head coach.

Since the Texans fired O’Brien, we’ve seen a different version of Deshaun Watson. Given more control of how Houston’s offense is designed, he is playing at an MVP-caliber level. In the team’s past six games, Watson has a 15/0 TD/INT ratio, 122.3 quarterback rating and completed 70.5% of his passes.

The Texans have also improved since moving on from O’Brien. After starting the season 0-4, Houston enters Week 13 with a 4-7 record. While it won’t be enough for interim head coach Romeo Crennel to retain the title next season, it is helping the gig become more attractive.

According to Pro Football Network’s NFL insider Tony Pauline, the smart money is on Bieniemy landing in Houston. While the Atlanta Falcons are reportedly a possibility, it’s viewed that the opportunity to coach Watson makes too much sense as a fit for Bieniemy.

Bieniemy is considered the most coveted candidate available next offseason. He received plenty of interest during the hiring cycle this past offseason, talking to the Colorado Buffaloes, Cleveland Browns and other NFL teams.

However, per Pauline, Bieniemy didn’t interview particularly well. As a result, he was passed over for the opportunities at the time. Despite his stellar resume and a strong endorsement from Andy Reid, Bieniemy had to wait another year.

As Pauline notes, Miami Dolphins head coach Brian Flores experienced similar issues. After being turned down by the Arizona Cardinals, the Miami Dolphins hired him and he is now emerging as one of the NFL’s rising head coaches.

Before the Texans hire a head coach, though, the team is targeting a general manager. Houston won’t be following the structure that doomed them before, when they allowed O’Brien to be both coach and GM.

Houston might have more difficulties landing a top candidate to become their general manager. O’Brien ridiculed moves left the Texans with no first- or second-round picks in the 2021 NFL Draft. To make matters worse, Houston’s cap situation is dire.

It will take a savvy general manager to rebuild this team around Watson, more so because of the club’s limited draft capital and cap flexibility. It makes this opening one of the least attractive for an executive, but it might be the dream job for the right candidate.

According to FanSided’s NFL insider Matt Lombardo, John Dorsey is among the favorites to land a general manager gig this offseason. Many in the league believe he will immediately hire Bieniemy and the two are a package deal.

Dorsey was the Kansas City Chiefs general manager from 2013-’16, playing a role in the selections of stars like Travis Kelce, Kareem Hunt and Tyreek Hill. Known as a risk-taker with his draft picks, he was later fired after the 2016 season. Shortly after, the Cleveland Browns hired him as their general manager.

The 60-year-old executive lasted just a few seasons in Cleveland before the team fired him on Dec. 31. While Dorsey has departed, the roster he helped build is 8-3 this season and on track to make the playoffs for the first time in years.

Dorsey recognizes the importance of having an outstanding talent at quarterback. If a team has that, building a roster around that and becoming a winner is easier. While there would certainly be challenges that come with this specific job, Dorsey could be the right hire to turn the Texans around. If he brings Bieniemy with him, even better for Deshaun Watson.