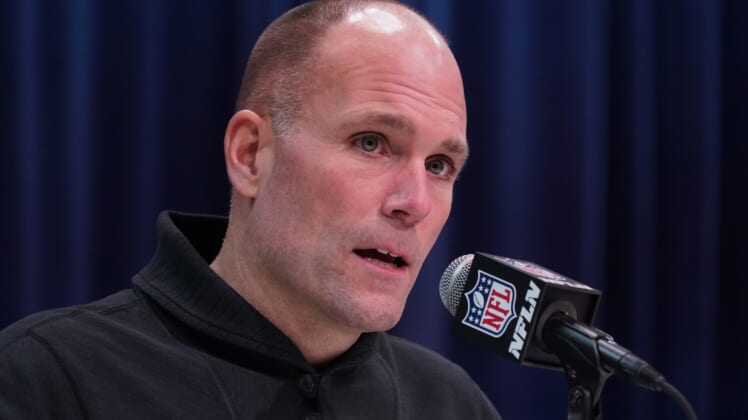 The Baltimore Ravens can’t seem to get over the hump and into true Super Bowl contention during the Lamar Jackson era, so it’ll be key for the team to make the most of its first few picks in the 2021 NFL Draft.

It’s pretty clear that Jackson needs more weapons at the receiver spot, and perhaps considerable scheme adjustments to put him in better positions for success as a passer. Absent lots of cap room and a few key free agents they’d love to re-sign, the Ravens need to be smart about their spending — especially with a Jackson extension on the horizon.

Using the latest order from Tankathon, let’s take a look at the top picks Baltimore has and break down who the front office might target as new additions to the 2021 roster. One key anecdote: Because former Ravens passing game coordinator David Culley was hired as Houston Texans head coach, Baltimore gets a compensatory third-round pick that’ll be at 104th overall, per the Ravens’ official website.

If any team can afford to take a big swing on Day 1 to address a defensive need, it’s the Ravens. One of the last things general manager Eric DeCosta should do here is reach for a receiver who may not be able to deliver right away.

There is some appeal in the other two prospects here besides Oweh, so let’s run them down first. Barmore is definitely an intriguing fit on the interior alongside the likes of Brandon Williams and Calais Campbell, which would also decrease the need to re-sign Derek Wolfe to what’ll probably be a pricey free-agent deal.

Having the caveat about not reaching for a receiver at the top is legitimate. However, Toney is electric with the ball in his hands, and has the skill set to line up at any receiver spot and in the backfield. Jackson would love to have someone like that, but asking Toney to contribute as a rookie may be too tall an order for him to fill — at least with the way Ravens offensive coordinator Greg Roman currently has his system constructed.

That leaves Oweh, who’s probably going to earn a second-round grade from the vast majority of scouts, yet his ceiling may be higher than just about any edge player in the 2021 class.

Why? Oweh has just about the freakiest skill set you’ll see in a prospect at his position.

Bruce Feldman of The Athletic put together a “freak list” ahead of the 2020 college football season, and Oweh was on it. He allegedly runs a 4.33-second 40-yard dash, benches 380 pounds and has 4.9% body fat at 6-foot-5, 257 pounds. The Ravens have the coaching and player development track record to transform Oweh into an All-Pro.

So many players in the Ravens’ linebacker corps are hitting free agency. Between edge-rushers Pernell McPhee and Yannick Ngakoue, along with Matt Judon and Tyus Bowser, there’s a lot to make up for if Baltimore can’t keep any of those men, although it’s assumed at least one or two will return.

In any event, Werner would make a lot of sense if he lasted this long. For one, he’d be reuniting with former Ohio State teammate Malik Harrison, who the Ravens nabbed in the third round of the 2020 draft. Having that innate chemistry makes the playmaking Werner an ideal fit on the inside of Baltimore’s predominant 3-4 scheme.

St. Brown seems readier to contribute in a pro-style scheme than, say, Toney in Round 1, and this is the much better value. The USC product could follow in JuJu Smith-Schuster’s footsteps as a Trojans receiver who was overlooked and went on to shine for an AFC North team after being drafted later than he should’ve been.

Sticking with the EDGE theme, Rashed is a one-year wonder of insane productivity. In 2019, he had 22.5 tackles for loss and 14 sacks.

Playing for an outmatched Oregon State team that had a talent inferiority to pretty much all its opponents, facing the many spread, uptempo offenses of the Pac-12 makes Rashed’s achievement all the more impressive. He’s a much leaner player who’d fit in as a stand-up rusher in the pros as opposed to having his hand in the dirt all the time.

Going with another edge player here would make a lot of sense for Baltimore, as Rashed is probably the tertiary Round 2 target based off the breakdowns in the prior section. Roche is overshadowed in this draft by Miami teammates Gregory Rousseau and Jaelan Phillips, but given Rousseau’s inexperience and Phillips’ medical history, he could defy the odds and be one of the two best from that Hurricanes trio.

Provided the Ravens keep at least a couple of their pass-rushers in-house and manage to nab Oweh in the first round, though, there are some intriguing options left over to help other aspects of their defense.

Let’s just talk about Washington. That “freaks list” from Feldman we mentioned before? He’s on it. According to Feldman, Washington benches over two times his body weight, has incredible leaping ability and the ball skills to go with it, which is quite rare for a safety.

Similar to Roche in a way, the Horned Frogs just so happen to have a superior overall prospect in TCU safety Trevon Moehrig also in this 2021 draft. If Baltimore gets Washington, though, watch out — he could be something like the next Tyrann Mathieu, undersized, underrated in the draft and capable of just flat-out finding the ball from any spot in the secondary.

The developmental possibilities for Slaton are what make him a compelling prospect of interest in the third round for the Ravens. He’s a massive, run-stuffing nose tackle who’d provide insurance in case the team can’t retain Brandon Williams, who’s due to be an unrestricted free agent in 2022.

In our mock simulations, Werner was just a little out of reach for the Ravens this late in the second round, but surprisingly, St. Brown was still available more often upon multiple sims.

Given that Baltimore has the new luxury of the comp pick, don’t be surprised if they trade up in the second round for someone like Werner. However, the selection of Washington in Round 3 can help make up for missing out on Werner to a degree.

That probably merits some explanation. Think about it this way: Washington is a versatile chess piece at defensive back who excels in coverage. Defensive coordinator Wink Martindale is known for exotic looks and unorthodox blitzes, so having someone like Washington in the secondary means the need for a linebacker isn’t quite as dire.

Plus, rising second-year backer Patrick Queen can only improve after being ranked 84th out of 85 qualifying linebackers. Or at least that’s the hope.

Oweh is admittedly a stretch to go in the first round, but again, you just can’t teach his physical tools, and it’s useless to reiterate how much Baltimore needs a more viable, physical presence at receiver.